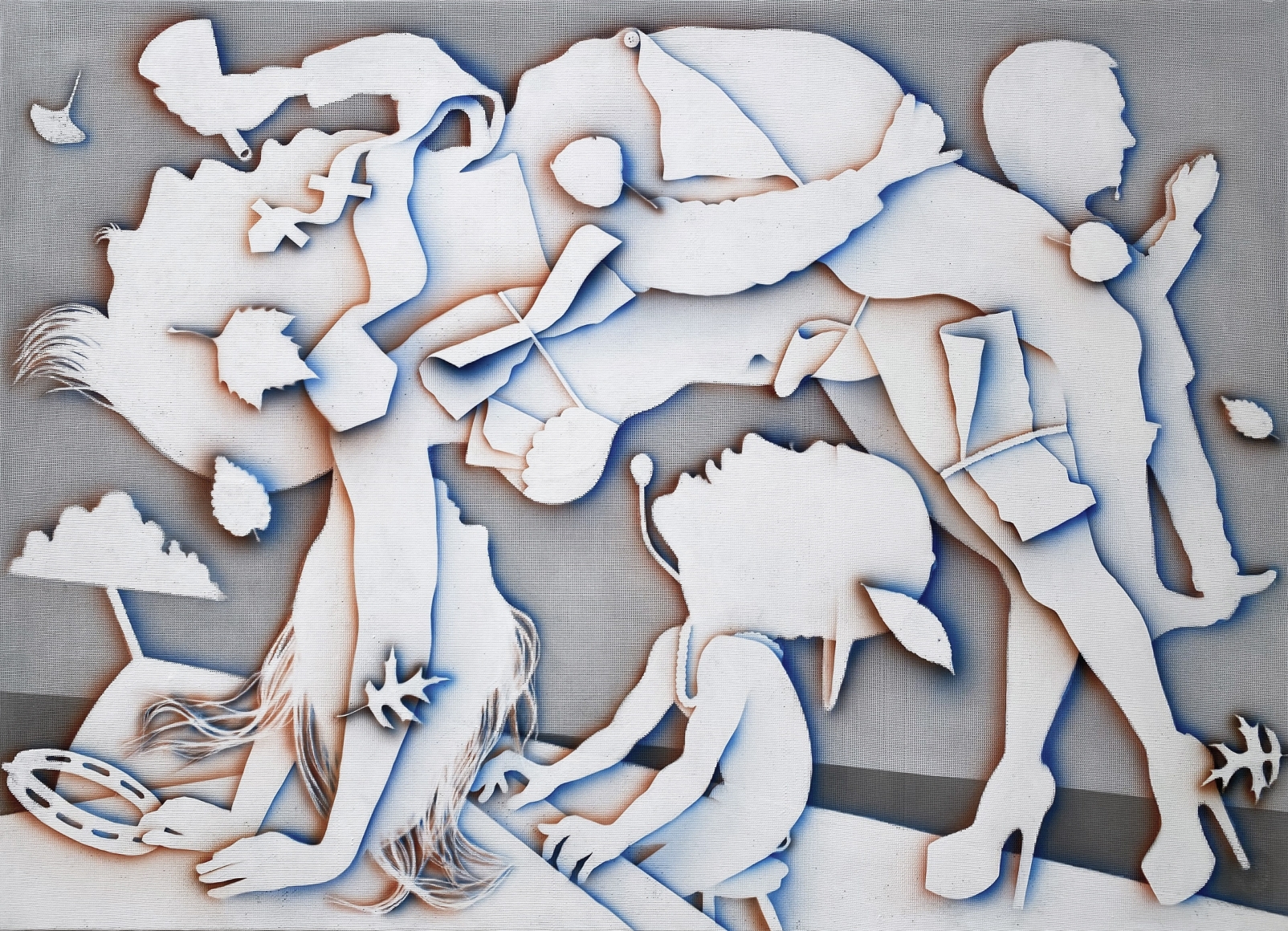 We interrupt your regularly scheduled frenzy to remind you that this month, New York-based DC Moore Gallery is hosting Alexi Worth’s latest solo show, Changing Table. The exhibition applies this artist, academic, and writer’s immense abilities in a more conceptually explicit manner than ever before. As we wait out the last months of the Trump administration, Changing Table immortalizes Worth’s personal experiences from this particular era, offering them the mercy of history’s whims.

A press release from DC Moore states that this year-end endeavor is “an exhibition of new mesh paintings created since August, and partly inspired by Worth’s efforts to conduct civil dialogues with Trump supporters online.” Worth himself stated that “After many months of efforts to engage in exclusively mild, friendly terms, I needed an outlet for suppressed feelings of childish fury, bafflement, and irritable fascination.”

“Using a new version of his distinctive spray technique,” the statement continues, “Worth envisioned lewd and absurd but not wholly improbable scenarios involving Kimberly Guilfoyle, Rush Limbaugh, Paul Manafort, Kanye West, and other political notables.” The artist pairs this sub-series with another involving images of babies, based on his own origin story. “When my aunt first met me, I urine-fountained all over myself,” Worth explained. “In later years, she liked to mention this mishap, with the implication that it represented some Rosebud-like key to my character.”

Art without eyeballs serves only the artist’s pure expression, but once placed in a gallery setting for exhibition and sale, it enters the public record of our culture at this precise moment. There has been no want for an artistic response to the last four years’ political tumult. Worth contributes his own highly specialized voice to the chorus. He works “in a rare photographic technique developed in the nineteenth century by Ernestine Lefevre Tournachon” called the ‘psychophotogram.’ This fictional process exposes imaginary objects to direct sunlight and produces images with “shallow depth and heightened 3D contours,”as the statement says.

Even without context, these images are subtly unsettling. Worth’s creations are void of color, save for varying hues of grey denoting the fore, middle, and backgrounds. This effect gains power placed amongst the white-walled gallery’s stark landscape. Red and blue alternate along each figures’ outline, evoking both 3D glasses and political parties. It’s strange to see bodies in silhouette without distinguishing features, and the mind seems to clamor for some face, some talisman of human presence beyond the empty voids that spring from Worth’s distinct process.

For example, the press release explains, “Mr. Manafort is pictured pantless, looking into the eyes of an allegorical figure of Fortune. Mr. Limbaugh, wearing only his Presidential Medal, steps on a smiling Ms. Guilefoyle, who lies prostrate at the feet of a monumental headless figure. In the largest painting, Autumn Leaves, a quartet performs musical gymnastics on shipboard, with Mr. West handling both vocals and piano.”

What will we remember from this artist’s account of the present? As power changes hands and America processes all that’s transpired, maybe the works throughout Changing Table will pay tribute to our shared focus on negative space. Worth clearly harbors animosity towards the trump administration, my family in rural Pennsylvania says they can’t trust the left, and I hate fruitless conflict. We’re all engulfed in mental images of that which we refuse to tolerate, ignoring the fact that we truly WANT the same things — equal access to an acceptable standard of living, strong community bonds, integrity from our leaders.

Maybe Worth meant the babies to criticize the other parties participating in his online interactions. Maybe he meant them to simultaneously tie into his own innate personality, tabula rasa plus a little extra spice. Maybe these children say something more about the state of this place america, still in its infancy. Across the board, the strength of these new works lie in their aptitude for discomfort. Discomfort is the dynamite that excavates space for new methods of thinking. By turning our eyes to the positive space, society might graduate into a new era void of tantrum-tainted tummy aches. Changing Table tells the story of this time in our lives through December 23rd, before the next time takes hold. Until then, the present frenzy can only continue.

Ask the Collector With Holly Hager Collecting 101: Why Art? Part I