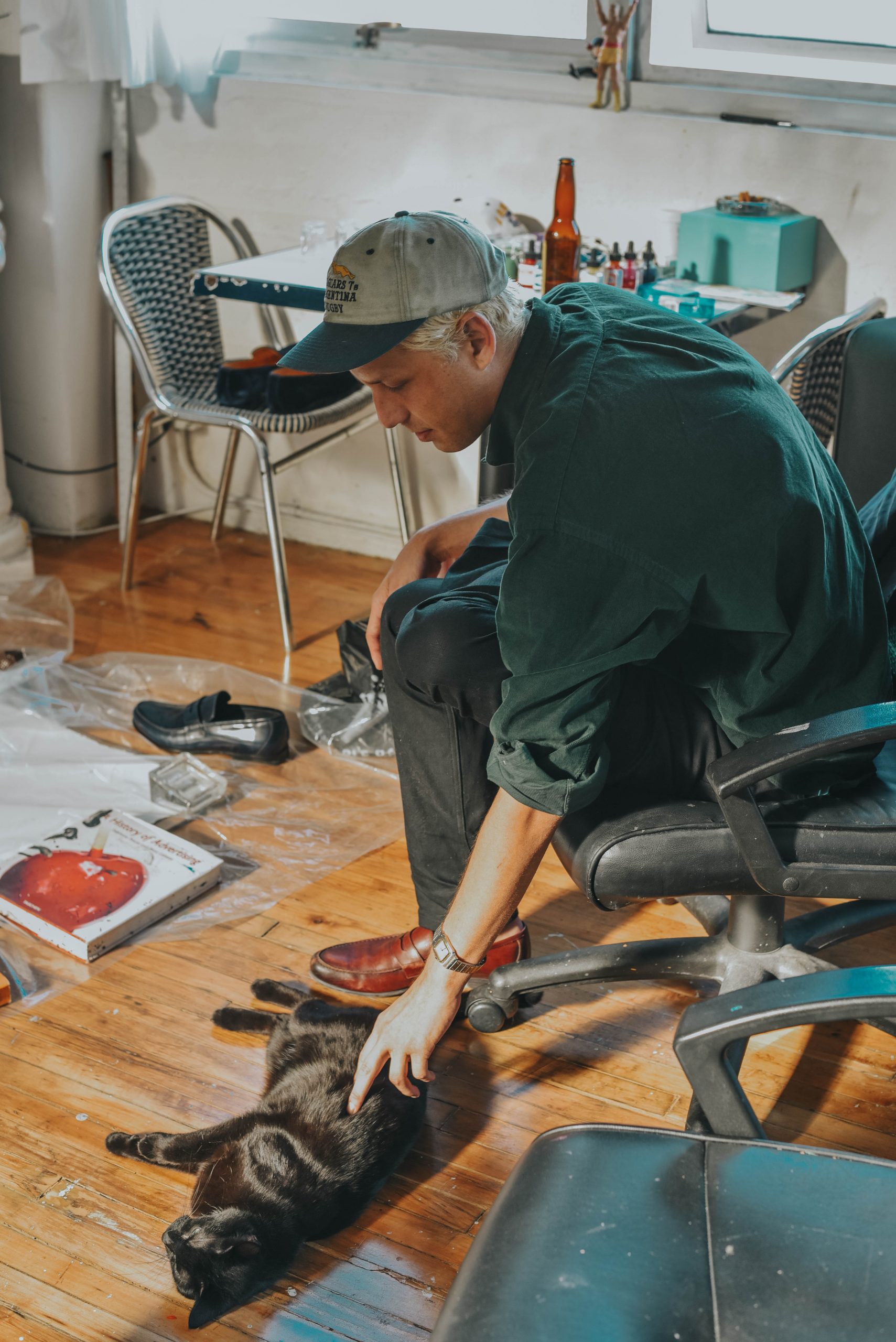 Los Angeles Artist Michael Gittes In His Studio, In An Interview With Eli Bronner For His New Exhibition at Victori + Mo

In an interview with art dealer Eli Bronner, Los Angeles-based artist Michael Gittes discusses his first memories, TLC, and the art of moments in the light of his new multimedia exhibition, Purgatorio.

After the 2020 US election this past November, most Americans would describe what they’re doing and feeling with that exact word: they’re simply waiting. For results, for solutions, for hope… there’s a lot on the line right now.

With the election results in many states still being contested, and amidst unfounded claims of widespread voter fraud coming directly from the president, it’s fair to say that most Americans are waiting on the sidelines, wringing their hands in anticipation of some final blessed clarity.

Whether you consider our present times to be your own fresh hell or you’ve embraced this time of social, political, and economic upheaval as one of personal renewal (while quite possibly never getting up off the couch), there’s truth in the notion that we are all experiencing this moment, however distinctly, together.

Or, as artist Michael Gittes would put it – we’re kind of just hanging out together in purgatory.

More specifically, the Los Angeles-based artist has taken to exploring the deep chasm of space-time we’re currently suspended in through his current exhibition, Purgatorio.

In his new multimedia installation at Victori + Mo’s Chelsea gallery, Gittes taps into the collective experience of pop culture from across the world, synchronizing popular music videos and performances with hit songs that all possess a common tempo. Every now and then, the audio and visual elements of the installation come together in moments of eerie, harmonious synchronicity: a gentle reminder of how we all exist in a space that is at once both random and totally incredible.

Gittes chooses to focus on moments in his work – moments where “the eternal and ephemeral intersect.” It’s fitting that the title of the show is a reference to the second part of Dante’s Divine Comedy, Purgatorio, which falls between the Inferno and Paradiso installments. Come Inauguration Day, will we experience the paradise that is promised at the end of our long waiting journey?

Only time will tell; in the meantime, there will be dancing in Purgatorio. With a curated soundtrack for the gallery featuring hit songs by artists from Vivaldi to Natalie Imbruglia, John Williams to Sia,the unexpectedly universal nature of what we groove to is both apparent and undeniably catchy.

In a recent conversation with the artist’s dealer, Eli Bronner, Gittes grants deeper insight into his art practice, what Purgatorio means as commentary on our collective cultural experience, and what he wants you to walk away with after your experience with Purgatorio.

Eli Bronner: Where are you from?

EB: What is your first memory?

MG: Magritte. My father had a lithograph hanging in our house on a beam four feet off the ground, where a little kid could see it.  I actually have a tattoo of the piece. I remember looking at it, and the crescent was shining through the tree very clearly in a surreal way.  And for whatever reason, I remember seeing that and thinking, “that’s not correct.  The tree should be blocking it.”

That was the first time I was introduced to the concepts of surrealism in art…  That led me to Magritte and then I started looking at his stuff besides the apples.

EB: Who is Jacuzzi?

EB: What is the essence of your practice?

MG: A close examination of the relationship between human beings and time.

EB: Why go with Purgatorio as the title of the exhibition?

MG: It was one of the first titles that just spoke for itself, I don’t remember thinking of it. Because of Covid and the post election period it fit perfectly to me. The idea that we’re on this journey, that we will end up in paradise, that again heavily emphasizes time. At the root of purgatory is the concept of waiting, that’s your slap on the wrist.

EB: You work in a variety of different materials from canvas and videos to glass, wood and paper, tell us about your choice around using such a diverse set of mediums and materials?

MG: When I’ve had a year or two or three or four to forget about my work, and go back and see it again, I realize that the works I thought were the most authentic, or the best works, were those in which I truly didn’t know what was happening. There’s no way I could let my ego get in the way. I want it to be about how I feel not why. If possible, I want to relieve something for the viewer in the same way that it relieves something for me.

EB: How do you feel this exhibition relates to your work in a larger context?

MG: I think that it relates to my work in a larger context because a lot of what’s at the heart of my work is moments — moments where the eternal and the ephemeral intersect. For example, celebrating a moment where a flag is raised like the exhibition I did at the DMZ in Korea, yet that flag stands for something eternal, but it’s just a moment.

Purgatorio, the show that’s up at the gallery, is a series of moments that show people moving in a certain pattern together and that to me is what’s in all of us when we hear percussive sounds, or make a drum beat, or pat our feet or thighs. They’re doing something fundamentally human at the highest level.

MG: I’d want them all to take away something different and they would because of their ages, the content of my show spans those decades. I want them to walk out of there with knowledge of new artists.

I really do like the idea that all of the content you’re seeing on the screens is free, ripped from YouTube… you could have done what I did for free for yourself. This is so utterly readymade that it’s almost already in everyone’s collection, which is why it resonates.

EB: Now that you’ve had some time to process the work, what do you think it means for you moving forward, did you learn anything from this show about your work or yourself?

MG: I learned with this show that a lot of the art that I do really is similar to photography in the sense that you have to see something and then try and figure out a way to capture it, as opposed to seeing something and creating it. It felt a lot more like I was a photographer.

I really like the idea of using expressions of art as materials. TLC was performing Creep, and that song is about cheating on your man, but I changed it. I really enjoyed the privilege of being able to see all these geniuses collaborate in some capacity.

EB: If you could see any of the icons you included, BTS, Cyd Charisse, Jackson 5, Nicholas Brothers, etc. from Purgatorio, who would you see?

EB: What is your message to the art world?

MG: I come in peace?

Are These Corcoran Students the NEXT Big Artists?