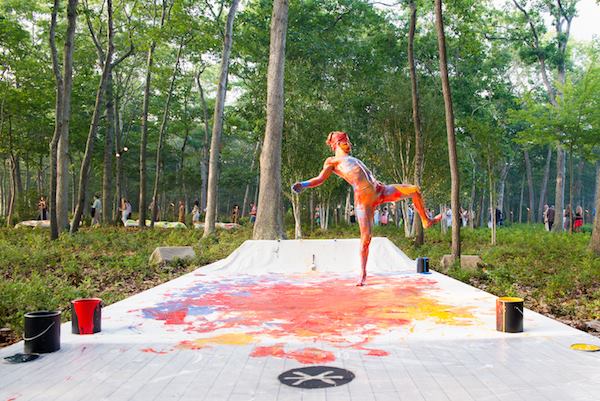 A Trump bus, Kanye West and propaganda buttons are all the rage this week in the art world. Our picks for events this week below!

Chashama will be hosting an event at Anita’s Way this week which will bring together the two worlds of dance and video. The show is intended to explore the dichotomy of one’s visual identity compared to ones personal identity. The show is, as per usual free to the public and will be comprised of four live performances on the 26th and the 27th of July.

It will be your last chance to see the work of noted multi-media artist Sadie Benning, which has been on view at Mary Boone Gallery for the past three months. Beninng’s work is noted not just for its thoughtful use of color but the way she negotiates the relationship between form and content in her pieces.

The 23rd Annual Watermill Center Summer Benefit and Auction is upon us once again and this year’s theme “House of Madness” is sure to bring in some fascinating spectacles. While the artistic line up is just as exciting, Robert Wilson and Kanye West will be debuting a collaborative art installation piece for the event; that is sure to turn heads and bring the crowd to the benefit which helps fund the center’s Artist Residency program.

If you are inclined to the more political events, t.Rutt has got you covered. After purchasing Donald Trump’s actual campaign bus on Craigslist last year, the dynamic duo of Mary Mihelic and David Gleeson have turned it into the political protest piece of this century. The bus has been making its away across America and will shortly be making a stop in New York, serving as a protest against the GOP initiative.

Amplifier Foundation and Interference Archive host the first of what hopefully will become many propaganda parties. Dozens of organizations, activists, designers, and artists producing materials around a political issue will get together to hang out, meet each other, and distribute their flyers, stickers, posters, buttons, and more. All propaganda is free, so load up on as many posters and stickers you can carry!

Ask the Collector With Holly Hager Collecting 101—Know your Artists