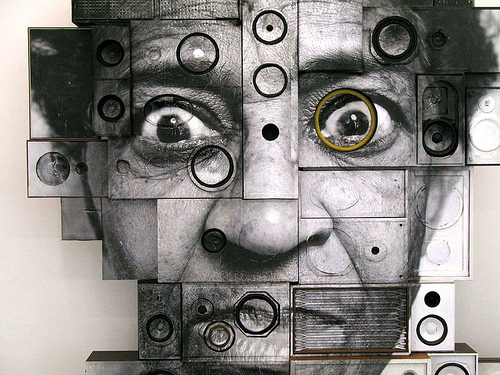 Today, anyone can make any opinion or statement, and it can be read by the masses. You’re probably tweeting on your phones right now! But guess what? You don’t have to be Beyoncé for the world to hear what you have to say. So, rather than making this about Beyoncé, it’s time for you to check and see what your local artists and creators are speaking up about. What issues make you want to aggressively tweet your opinions and how do they make you feel? Better yet, what artists are on the same boat with you and how are they getting the word out.

Artists are using their craft to make a statement on today’s current events. Don’t forget to look around you; there may be a life changing message waiting for you around the corner. Meet five artists from around the world who have been getting their message to the masses through their art.

We all know JR started out tagging the streets and buildings of Paris, and now he is responsible for a global participatory art project, INSIDEOUT: The People’s Art Project. The project is based on identity and their most important causes. Rather than asking “can art change the world?” JR asks, “Can art change people’s lives?”. Through the portraits that have been plastered on many walls around the world, JR offers the people all the control to say what matters to them as individuals. Top photo courtesy of artist.

Samuel Rodriguez is a self-taught graffiti artist based in San Jose that has gone beyond his canvas, with his work being exhibited in public spaces, museums, companies, galleries, and publications from the around the world. Through this style, he’s made pieces concerning mixed identity and world languages that would blow your mind. For example, his series Freedom to Think & Speak asks us to question the idea of who we believe we are and all the factors that come into play when we picture that image.

Jefferson Pinder is a force of nature. If you’re up for a challenge, check out his work that reclaims and redefines our perceptions of our own multifaceted society.  He spares no expense on material, working with video and anything he can get his hands on to captivate and inspire you. Many of his works especially his video piece, Dark Matter discusses the social constructs that have impacted the African-American experience. He changes the conversation and shines a light on history and its emotional effects on people over time.

Trash bags or homeless people? Maxwell Rushton moves his trash bag sculptures to the streets of London to see how people in the area react to seeing hunched over silhouettes covered in trash bags on the sidewalks. He wanted viewers to question whether we view homeless people as garbage. Some passerby looked in awe while others tried to comfort the sculptures.

You don’t have to be an artist to change the world. Antanas Mockus who served two terms as mayor of Bogotá, Colombia, hired mime artists to replace the corrupt traffic police officers to cut down the traffic fatalities. Within a couple of months, people began respecting traffic signals and crosswalks. A regular non-artist dove into art as a method of action to change the ways of a city. Respect!