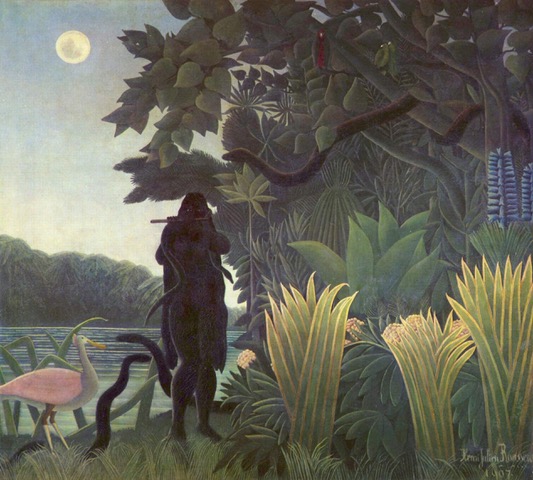 He lived a life that was markedly different from other artists of his time—for most of his life he had a casual art practice, the practice of an untrained “Sunday painter,” and carried out a seemingly normal existence in all other respects until his 40s.

As a young man he worked at a law firm, and joined the army at the age of 19 to avoid punishment for petty larceny. In 1869 he took a job as a toll collector in Paris, a position he held through his adult life. The role earned him the nickname “Le Douanier” amongst younger artists, a title that seems by equal turns gently mocking, and affectionate.

THE PIONEER OF FANTASY

If Rousseau’s day job was a portrait of Parisian normalcy, his inner world was anything but, and he is now known to us as the painter of lush and wild jungle scenes like The Dream, and The Snake Charmer, as well as the gently surreal Sleeping Gypsy.

Rousseau’s art is recognized for its two-dimensional compression and innocent, naive style, a style which was mocked by critics but revered by his painterly contemporaries. Picasso found Rousseau’s work deeply inspiring, and the elder artist’s paintings, both in terms of subject matter and execution, laid the groundwork for the later visual art of the European surrealists.

Exotic flowers bloom in many of his compositions, and this botanical imagery was inspired by visits to the Parisian Jardin des Plantes. Rousseau once told art critic Arsène Alexandre, “When I go into the glass houses and I see the strange plants of exotic lands, it seems to me that I enter into a dream.” Indeed, that ineffable feeling of being in a dream permeates his works, and, I believe, is legible in his astrological portrait.

Rousseau is a solar Gemini with his Moon in Cancer, and Aquarius on the ascendant. His Aquarius rising may have given him his eccentric sense of self-expression, as those with Aquarius rising see the world through the Aquarian lens, which is to say, the lens of unconventionality, even bizarreness. Aquarius is co-ruled by Saturn, planet of tradition, and Uranus, planet of progressive futurity, thus Aquarius is able to take materials of the past and use them as tools on their path to utopia.

Rousseau’s obsession with nature untouched by man, with jungle scenes and wild beasts, speaks to an affection for nature that stands the test of time—nature as Saturn lets it grow—for Saturn is said to have presided over the mythical Golden Age when humankind had no need to labor, the entire world being a veritable Eden.

What is Uranian, however, is Rousseau’s painting style, which broke conventions in terms of composition, line-work, and perspective, as he flattened his scenes into two dimensional realms, piled high with wild fauna, flora, and human forms. This had not yet been achieved in art. The Aquarian perspective is also utopian, and there is something undeniably edenic, although wild, about his jungle scenes.

His chart ruler is Saturn, the aforementioned planet of tradition but also paradise, which sits heavily in his First House. Saturn in House 1 gives the disposition of one who is apt to take on responsibility rather than pleasure-seek, with the stern and sober influence of Saturn in the house of identity. With Saturn trine his Sun in the 5th house, Rousseau possessed a diligence and depth of focus that likely bolstered his unconventional artistic eye.

We also see that Neptune is conjunct his ascendant, and we can infer that this was a source of imaginative inspiration for the painter. Neptune is the modern ruler of Pisces; it is the sign of dreams and fantasy. Those with Neptune on the ascendant are apt to view life through a romantic, otherworldly lens, as the planet of shimmering imagination shrouds reality in a cloak of fog. Thus the blending of Saturn and Neptune imbues Rousseau with a combination of responsibility and flamboyance, qualities important to any artist who wishes to sustain their practice.

ROUSSEAU AND THE MOON

With his Sun in Gemini, Rousseau was undoubtedly intelligent, playful, and deeply curious. His Sun sits in the 5th House of creativity and self-expression, and his solar identity derived pleasure from the act of creating art; House 5, after all, is associated with creative fertility. Conjunct Mercury, the planet of communication, language, ideas, and inspiration, we see signs of a sparkling imagination, as well as an idiosyncratic wit. Gemini is the sign of duality, ruled by trickster planet Mercury. A quick mind, and an eccentric intellectual sense likely emanated from these placements in the playful 5th House.

Rousseau’s natal Moon is in the sign Cancer, in the 6th House of routine and labor. The Moon is the ruler of Cancer, and very much loves to be in this astrological position. Here her energy flows freely as she desires, for she is “at home.” Lunar Cancerians are deeply emotional, intuitive, and thrive in the realm of imaginative creativity. Fantasy, fairy-tale, myth—all of this is of interest to a lunar Cancer, for Cancer is the sign that tells us about the past, ancestry, and origins.

The Moon is the indicator of our emotional disposition, as well as our emotional needs. I would say that Rousseau’s Moon in Cancer represents a deep connection to his inner child, for we know that his style was in part was inspired by illustrations from children’s books. One of the things which sets Rousseau’s works apart from those of other painters depicting foreign locales, for example Gauguin, is the sense of total innocence which emanates from his work, an effect of the illustrative quality of his shapes. I believe he was able to achieve it through the influence of his Cancer Moon. Notice, too, that the Moon appears in many of his works.

Cancer is the sign of one’s homeland and national identity, and we know that Rousseau was strongly attached to his Parisian identity. His Self Portrait (1890) shows him posed cartoonishly in front of the Seine, with other portraits depicting locations around Paris that he was fond of as well. In the vein of painting themes of national pride, we can look to his almost hilarious work Liberty Inviting the Artists To Take Part in the 22nd Exhibition of the Societe des Artistes Independants (1905-06) where he found subject matter in the French national motto (“Liberté, égalité, fraternité!”). His Moon-Venus conjunction in Cancer shows that there is an artistic pleasure derived from exploring Cancerian themes, whether this is a pleasure of engaging one’s own nationality, or one’s own childlike disposition.

We must remember that until age 42 Rousseau was virtually invisible as an artist, which changed after 1885 when he submitted work to the Salon des Indépendants leading to his first salon showing in 1886. Astrology provides a compelling framework whereby to make sense of Rousseau’s sudden burst of artistic output, or crystallization of vision. Zodiacal releasing is a timing technique from the Hellenistic period, used by traditional astrologers, that tracks the movement of the lots of Spirit and Fortune.

In 1886, Rousseau’s Lot of Spirit activated his natal 6th House in Cancer, which lit up his Moon. What’s more, is that in 1900 Rousseau’s lot of Fortune activated his natal Jupiter in Pisces, which is the planetary ruler of his North Node, as well as ruler of his midheaven, the angle of public image. I propose that this releasing triggered an era of artistic productivity for the artist, one which spurred him to express his creative genius until the end of his life.

What is most interesting about Rousseau’s zodiacal releasing is that it correlates to a period of time in his life that was exalted, even if at first glance it is not clear why the Lot of Spirit activating one’s 6th House would lead to such a burst of creativity.

Yes, the activation of the Moon and Venus in Cancer denotes an artistic, or creative period in the life, but House 6 is typically associated with labor and hard work. However, if we were to read the chart through the lens of Rousseau’s North Node ruler Jupiter, we would see that the Moon and Venus occupy the 5th place from the North Node ruler, indicating that there is something of the 5th principle, the principle of creative fertility, that was awakened at this time.

MORE THAN JUST A CUSTOMS CLERK

After four years of having that 6th/5th House activation from the Lot of Spirit, Rousseau’s Lot of Fortune activated his natal 2nd House in Pisces. The 2nd House does talk to us about artistic themes like the use of the senses, and the establishment of one’s values, but it is not overtly creative, and certainly does not explicitly say that someone will become a serious artist through a House 2 activation.

The nodal axis gives indications of one’s mission in this lifetime, and when the ruler of the North Node, our karmic path forward, is activated through releasing, we’re pushed by the cosmos onto the path we’re meant to walk. Rousseau’s North Node ruler, Jupiter in Pisces, was activated in 1900 by the lot of Fortune, engaging that nodal mission once and for all.

In addition to this, Jupiter is also the ruler of Rousseau’s midheaven—point of public image and “career”—hence his destiny was arguably activated at this time. Rousseau stayed in this releasing period until 1910 when he passed away from complications after a surgery.

The work that Rousseau left behind is now revered for its depth of imagination, its sense of play, its poetic drama, and its reverence for the realm of dream. We know now, as Picasso did, that le Douanier was more than just a customs clerk.

Cristina Farella is a consulting astrologer and writer located in Eugene, OR. She is the astrologer for the upcoming Celestial Bodies Oracle, which is currently available for pre-order.

Learn more about Cristina and book a session to dive into your own natal chart with her on her website.

5 Reasons Why Fergus McCaffrey’s “Gutai” is Worth the Visit

What to Wear to this Year’s Armory Party at MoMA