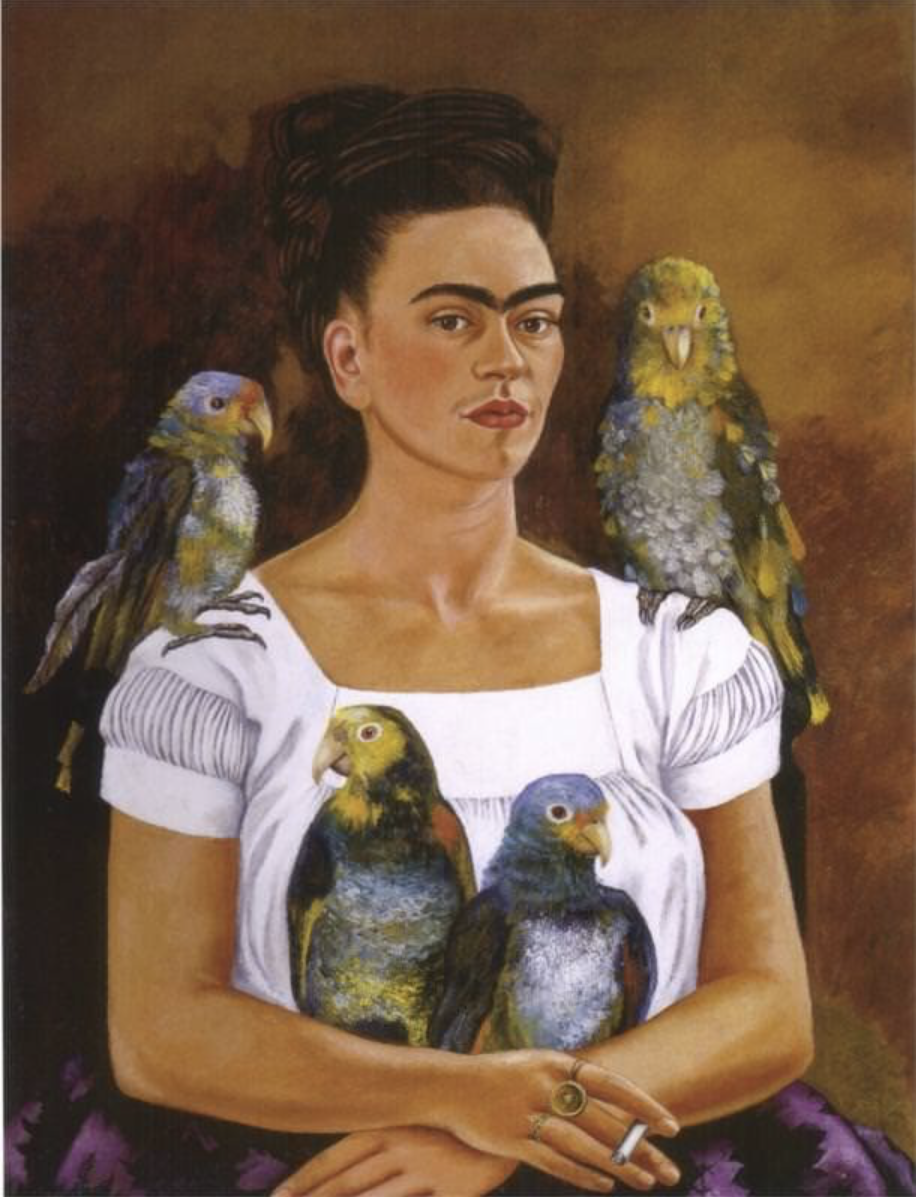 Magdalena Carmen Frida Kahlo y Calderón was born on July 6, 1907 at 8:30am in Coyoacán, Mexico.* Known to us now as the patron saint of pain and passion, Kahlo lived a life steeped in tragedy, and from the recesses of her soul created a body of work that stands as a testament to her immense power to transfigure raw feeling into paintings that merge dream and reality, human and animal, flesh and underworld.

Finding her body fragmented by illness and accident, she used painting as a means of formal exploration, both aesthetic and physical. Extreme events of her life cultivated extreme modes of self-expression. She is our radical, our communist, our surrealist, our icon of Mexicanidad, lamentress with spider-monkey familiar. Let’s take a look at her stars.

Astrologically, Frida is a solar Cancer with her Moon in Taurus and Leo on the ascendant. The ascendant is the angle of beginning, and indicates to us that the Sun is the ruler of her chart, as Leo is ruled by the Sun. In her chart, the Sun in Cancer sits in House 11, conjunct Neptune, and alongside Jupiter and her North Node, which rest conjunct one another as well. And so in House 11 we see the ego (Sun) blend with the planet of illusion, fantasy, and madness (Neptune), and the planet of fertility, optimism, and excess merges with the node of fate. There is deep karmic purpose here.

Each house of the chart talks to us about a unique set of themes, divisions or phases of the lives we lead. House 11 in general terms talks to us about the will-to-individuation of the many, meaning politics, one’s chosen circle of equals, friendship, communal energy. House 11 is the house of the individual free from familial bond as well as free from the rigid constraints of dogma, or hierarchy. The ideal collective rather than the ideal self; utopia.

For The Good of The People

Kahlo vehemently opposed any and all capitalist ideology, and devoted much of her life to her political efforts which sought to spread her and her contemporaries dream of communism as an antidote to colonialism which had injured her native Mexico. With her Sun in House 11, we see that her ego sense is wedded to social questions of her time. Jupiter’s presence her shows that she finds expansion in the public, communal arenas of life.

Working with those who were her ideological equal was paramount to her. It makes me think of her dismissal of the European surrealists whom she met in Paris, saying, “They make me vomit. They are so damn ‘intellectual’ and rotten that I can’t stand them anymore… I’d rather sit on the floor in the market of Toluca and sell tortillas, than to have anything to do with those ‘artistic’ bitches of Paris.”**

French surrealist Andre Breton famously described Frida as “A ribbon around a bomb” and tried his best to claim her for his movement. In characteristic fashion, she vehemently resisted. While the European surrealists explored themes of dream and psychology, Frida and her contemporaries were invested in projects both artistic and communal, which sought to provide social critique, and to empower the downtrodden. This is absolutely something we can trace back to her 11th House stellium.

As an artist, Kahlo’s Sun conjunct Neptune shows that for her, reality and dream were virtually indistinguishable. Neptune is the planet of fantasy, madness, intuition, and inspiration, among many other archetypal influences. Neptune rules the realm of dreaming, of healing, illness, illusion. Planets that make contact with Neptune are enveloped by its energy, and from this merge comes a highly spiritual way of being in the world.

One of the hallmarks of Kahlo’s work is her fierce and imaginative engagement with trauma. Her Cancer Sun’s conjunction to Neptune imbues it with energy of the 8th principle, as Neptune is the ruler of her 8th House. We associate 8th principle energy with underworld, cycles of karma, trauma, and the subsequent rebirth that comes from engaging the shadow. It is a fertile space, but a dark one, no doubt. Kahlo’s continual ability to rebirth herself through magnificent pain is depicted in works like The Broken Column (1944) and The Wounded Deer (1946).

In paintings like these, the body is subjected to extreme conditions of pain, penetration, disruption. The Broken Column is famously concerned with the intense spinal pain Kahlo experienced after a bus accident in 1925 in which a trolley car crashed into a bus she was riding. Kahlo was pierced by a steel beam through her pelvis, shattering her spinal column and pelvis, as well as her collarbone and two ribs. Her right leg, already a source of discomfort due to childhood polio, was fractured in 11 places, and her right foot crushed. In her months-long recovery period, Frida began to paint. This serious trauma set her on a course of a lifetime of physical pain, but was also one of the catalysts for her artistic path.

Kahlo’s House 11 stellium is pierced by an electric opposition from Uranus and Mars, which sit conjunct in House 5, the house of art, creation, and self-expression. The opposition is impossible to ignore as it cuts across the body of the chart, inspiring this imaginative astrologer to see this as a cosmic manifestation of that famous steel pole. From the house of art emanates a red ray of opposition. Discomfort, pain, and tumult come from Uranus’s opposition to the Sun, as well as great gifts of inspiration and a sense of invention.

Uranus is the planet of innovation, futurity, and shocking change. Conjunct Mars in Capricorn, the visionary energy of Uranus blends with the warring impulse of Mars. The two planets graft together bravery and innovation, forceful action, and inventiveness rooted in the material (Capricorn). We should also see that her 5th House is ruled by Jupiter, one of the planets in her 11th House stellium. A link, an arrow, from art to community. Self-expression, futurity, instability, and genius emerge here.

The Moon is of vital importance in the chart of an artist. Kahlo’s Moon in Taurus sits conjunct her midheaven, showing us that her path of destiny was completely wedded to the luminary of art, intuition, and emotion. Taurus is the sign of sensory experience, material being. With the Moon in sensual Taurus, Kahlo leads with the body. The Moon also carries with it 12th House energy, that is, the energy of divinity, madness, and the sublime, as Kahlo’s 12th House cusp is in Cancer, thus the Moon on the midheaven is imbued with the strange and vast power of House 12. This enriches her path as an artist, as the Moon on midheaven carries traces of earth (Taurus) and soul (House 12).

Alongside the Moon in House 10 we find Pluto conjunct Venus in Gemini, imbuing her 10th House, the house of public persona with Gemini energy—traces of the 3rd principle circulate here. This is crucial for the expression of her Venus, the planet of aesthetics and passion. Venus conjunct Pluto in Gemini says to us that her sense of art as well as romantic love is fed or inspired by Plutonian energy. Cycles of birth, destruction and rebirth. An engagement with the richness of the unconscious, the soul. With these planets in Gemini, they take on an intellectual bent, a quality that surely permeates Kahlo’s work.

We cannot ignore Saturn in this chart, which sits in the 8th House, that aforementioned house of underworld. Saturn is the planet of self-mastery, responsibility, and diligence, and Kahlo’s sits in Pisces, imbuing this practical planet with Neptunian energy. Even in her most diligent efforts, Kahlo was sensitive, intuitive, and embroiled in cycles of illness and healing. Saturn aspects almost all other critical points of the chart—trining her Mercury in House 12, which shows that her intellect was rooted in a stream of consciousness approach. Saturn also trines her Jupiter, giving her great strength of purpose, a stubborn nature, an unchangeable bravery, as the planet of responsibility supports and harmonizes with the planet of expansion and optimism.

Squaring Venus and Pluto, her Saturn again imbues her with a tenacity, a stubbornness. This is one of those larger than life aspects that when found in the natal chart is sure to indicate a life of great intensity, struggle, cyclic strife, but one that is also supported by an indelible force of will. Squaring her Venus, her Saturn shows that she may be attracted to partners who are older than her, almost fatherly, even, and that that dynamic will be difficult for her, tumultuous and cyclic as well. With Saturn trine her Moon, we see that Frida is a woman who had the ability to transform her vision into reality, lending practical power to her sense of art.

The last note we can make about this chart and this life (which as you can surely tell is rich, deep, and infinitely complex), is the presence of Uranus and Mars in House 5, the house, among many things, of creation, self-expression, sexual affairs. With Uranus conjunct Mars in the 5th House, we see here indications of someone who is inventive and unrestrained in love and sex, as Uranus, outsider genius of the solar system, is empowered by fiery, active Mars. Frida’s long list of lovers is famous at this point, as is her fluid sexuality. To me, the presence of Uranus in House 5 is indicative of this expansive, progressive, passionate bent. Uranus in House 5 is also highly significant as House 5 (along with 3 and 12) is one of the three main houses of art.

The presence of this planet thus situated had helped to urge and empower Kahlo to create a body of work that was as yet unseen by the public of her time. Uranus dives headlong toward the future. Kahlo’s work, wedded to dream, perfumed with bougainvillea, does the same.

*AstroDatabank gives Kahlo’s chart a AA rating, making it trustworthy for our purposes

Cristina Farella is a consulting astrologer and writer located in Eugene, OR. She is the astrologer for the upcoming  Celestial Bodies Oracle, which is currently available for pre-order.

Learn more about Cristina and book a session to dive into your own natal chart with her on her website.