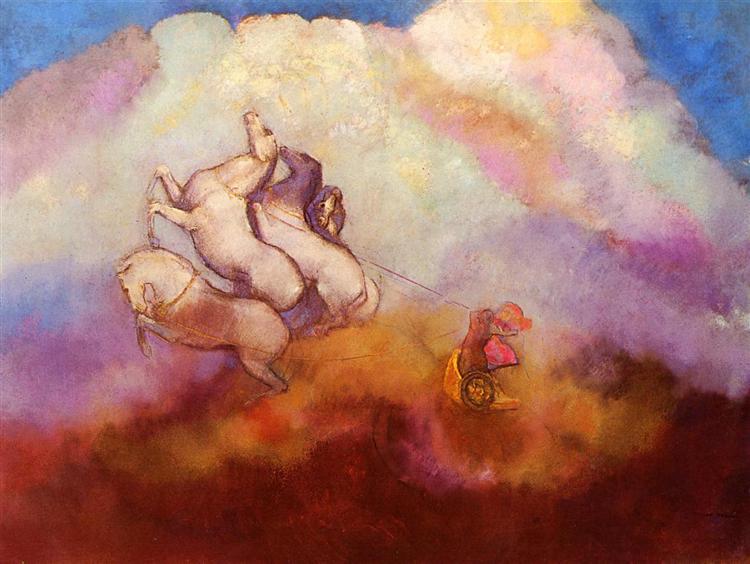 Odilon Redon was a luminously imaginative visual artist of the French Symbolist set. His oeuvre consists of dark, gothic, charcoal works, as well as vividly lush pastel and oil compositions, all of which depict figures and scenes plucked from dream, or from the mythical collective unconscious. In his journals, A soi-même (To Myself), he writes, “I have made an art according to myself. I have done it with eyes open to the marvels of the visible world… art is the supreme range, high, salutary, and sacred; it blossoms…” (Redon, 7).

Born on April 20th, 1840, in Bordeaux, France, Redon was a solar Taurus, lunar Sagittarius, with the sign Cancer on the ascendant angle of his chart. In honor of his solar return, let’s take a look at his natal astrology, and see if we can draw some imaginative connections between the artist’s works and his astrological portrait.

Redon’s chart begins at 20° Cancer; at the time of his birth, the constellation of Cancer was rising over the eastern horizon. The rising sign can describe the “first impression” that we make on others, as the sign on the cusp of House 1 bears influence on our comportment. The ascendant sign can describe the way in which we see the world.

Though many of the celestial bodies can be attributed to creative intelligence, we can safely say that the Moon, the planetary ruler of Cancer, and Redon’s chart ruler, carries an essential interest in artistic matters. As an astrological entity, the Moon is known to us for her cycles of waning and waxing, her bursts of fullness and her monthly disappearing act on the New Moon. The Moon moves tides, and connected to the ocean, she is linked with the intuitive sense, the mythic, the protean. Life emanates from the ocean, as does creative artistic power.

As the Moon is Redon’s chart ruler, she bears special importance here, and we know that she is emphasized in his natal. From a young age, Redon was given artistic instruction, drawing lessons with a special tutor, and displayed an innate creativity.

We can connect the Moon with stories of ancient myth, and Redon was certainly fascinated with all things mythical, which we can easily see from his later paintings and pastels, many of which are named after characters of myth or mythic situations: “The Birth of Venus,” “Apollo’s Chariot,” “The Three Fates,” “Centaur with Cello,” “Head of Orpheus on the Waters,” “Oedipus in the Garden of Illusions” — truly, myth provided a deep well of inspiration for Redon.

Redon’s Moon sits in House 6, the house of mundane ritual, and is placed in the sign Sagittarius. Our Moons describe what we crave, emotionally, or what defines safety and security for us. Sagittarius, centaur-archer, represents the pull of spirit toward cultural aims, as this sign is ruled by the planet Jupiter. Redon would be naturally curious about the world around him, drawn to the arts, literature, and philosophical questions—all of this is indicated by his intelligent and voracious Sagittarius Moon.

Sitting in the 6th House, we see that Redon would be both intensely hard-working, as well as supremely sensitive to his environments, as the 6th House describes health and work ethic. As a side-note, I just love that Redon’s Moon is in Sagittarius, which is symbolized by the centaur, and centaurs and horses feature frequently in his compositions.

Redon was born when the Sun was in the first moments of the sign Taurus (just as it is today, at the time of this article’s publication), as his Sun is noted at 0° in the sign of the bull. Ruled by Venus, and fixed in nature, Taurus is the sign that explores resources and values through sensory experience. Taurus is deeply curious, methodical, and rigorous in her endeavors.

We can delight in the fact that Redon seemed fascinated by Venus, his solar ruler, painting Venus scenes six times between 1910 and 1912. The most striking composition is an oblong portrait of Venus.

The goddess is featureless, but balanced as if on tip-toe, stepping out of a nacreous oyster shell. Triumphant clouds burst behind the shell, and the foreground of sea and sand is a jubilant smattering of pink and blue. Each “Venus” painting Redon made was inspired by the mythical story of her ocean birth, an event only made possible by the castrated and discarded genitalia of Ouranos thrown into the sea by Zeus.

The purity of Redon’s 0° Taurus Sun no doubt infused him with the sensitivity of an artist, as Taureans are supremely attuned to color, texture, and all things sensory, and I’d like to think that his focus on Venus as an entity was a kind of unconscious, magical veneration of his patron planet.

Venus in his chart sits in House 10, the house of legacy and public image, close to his midheaven, which we can take as an indicator that art was a powerful and unavoidable part of his destiny.

The quality of effervescent beauty that emanates from his pastel and oil works is striking, one would definitely need to be aided by Venus to accomplish such works! In his journals, Redon notes, “I am quite willing to admit that modeling is essential in our art, but on condition that its only aim be beauty” (Redon, 85).

Redon’s Sun is placed in House 11, the house of social clubs and groups, a house that ancient astrologers considered a house of “good fortune.” His Sun’s closest conjunction is to Mars, at 3° Taurus, which shows an impressive force of energy and drive wedded closely to his Taurus Sun.

Shadow and Dream, Neptune in the 8th House

Though we’ve been spending time with his more vibrant pastel and oil works, Redon was also, and foremost, a prolific creator of many charcoal works, which he called his noirs, created as they were in shades of black.

The content of these works verges somewhere between dream and nightmare, absurdist schtick and naiveté. In his noirs, Redon depicts disembodied eyeballs floating away like hot air balloons (“The Eye Like a Strange Balloon Goes to Infinity”), a human face transposed onto a spider’s body (“The Crying Spider”), and small human figures encountering, again, a giant eye, floating in a temple (“Vision”). One is unsure whether these images are supposed to evoke laughter or a shiver or revulsion, and oftentimes we experience both, responding to something strange and uncanny in the works.

In Redon’s chart, the planet Neptune sits in Aquarius in House 8, the house we can associate with the personal underworld, the realm of dream and nightmare image, of memory, and sensations that emanate from the unconscious.

Neptune is the mystical planet of fog, delusion, and intuitive force, and so this placement seems to suggest an affinity for the strange and occult in Redon’s psyche. The “fogginess” of Neptune actually seems to permeate so many of Redon’s works, especially his oils and pastels, as so many compositions seem draped in mist, subjects prismatic but out of focus. This is simply Neptunian.

Neptune is almost unaspected but for a single square to Jupiter, another planet that represents spiritual force, which sits in Scorpio in House 5, the house of creative expression.

That these two planets, focused as they are on spirituality, magic, and surreality, are in close conversation with one another, is striking, and shows that for all of Redon’s Venusian power, there was also something crucial about the exploration of underworld in his life and in his art. His cohort, the French Symbolists, were engaged in this exploration. Jean Moreas wrote in the Symbolist Manifesto:

“Thus, in this art movement, representations of nature, human activities and all real life events don’t stand on their own; they are rather veiled reflections of the senses pointing to archetypal meanings through their esoteric connections.”

House 8 is a place of esoteric content—the content of the unconscious, and because of this, we have to consider Redon’s Neptune a crucial component of his artistic vision, and his natal chart.

We must also see that Redon’s North Node, that point of “destiny” in the natal chart, is in Pisces, conjunct his Part of Fortune, an ancient indicator of luck and success. Pisces is ruled by both Neptune, in modern astrology, and Jupiter, traditionally. Neptune and Jupiter in Houses 8 and 5 thus add detail to the overall unfolding of Redon’s fated path in this lifetime.

Fated Transits of the Nodes

Though Redon was tutored in art as a child, he did not formally “start” his art career until 1879, at the age of 39, when he self-published a book of lithographs titled Dans le Rêve. Interestingly, at this time Redon was beginning his Uranus opposition, an astrological rite of passage that we all pass through around ages 39-40, known to us as a “mid-life crisis” transit!


This is a moment where we are suddenly driven to accomplish what we have not yet achieved in our lifetimes. In the year 1879, Redon also had Jupiter, the planet of expansion, conjunct his natal North Node, his point of “destiny,” and Uranus, planet of shock and change, conjunct his South Node, the point of “past-life energy.” This was no doubt an unsettled, but likely inspired, moment for the artist.

Redon’s true renown didn’t come until a few years later when, in 1884, Joris-Karl Huysmans wrote his novel À rebors. This novel told a dreamlike story of a protagonist, a depraved aesthete, whose house is decorated with works by Gustave Moreau and Redon. It was wildly influential on the symbolist artists, even being said to have inspired Oscar Wilde in writing The Portrait of Dorian Gray.

À rebors brought acclaim to Redon’s work. From an astrological vantage point, we can see that in 1884, Redon’s Sun was being transited by the South Node, indicating a new “story” unfolding around his fame and visibility, and the North Node was transiting his natal Jupiter, emphasizing his creative luck.

Parting Thoughts on art, by Odilon

There is always so much more than can be said about an artist’s life, their work, and their natal astrology, but for the sake of time we must stop here. I will leave you with some of Redon’s own words on the topic of his art:

What have I put in my works to suggest to them so many subtleties? I have put in them a little door opening onto a mystery. I have made fictions. It is up to them to go further.

The natural blossoming and growth of a work cannot come from dilettantism. It would serve perfection marvelously if this were possible. It can only happen in small pieces and the author who could achieve the perfect work, would only produce one; he would have touched the absolute and would stop painting.

It is precisely from the regret left by the imperfect work that the next one can be born.

You cannot analyze yourself except after emotion, starting point of all genesis. At the instant one masters one’s passion, it is no more. It has served the embryo. All the organs will appear and this requires obedient care, attentive to the germ: the most lucid understanding of his work, at that moment, embryonic but alive: reason, analysis: the intellectual agent will serve the passionate agent and is also brought to life by the latter.

In a word, the nerves of the artist, his sensitivity, his very nature undertake the important business of creation. (Redon, 77)