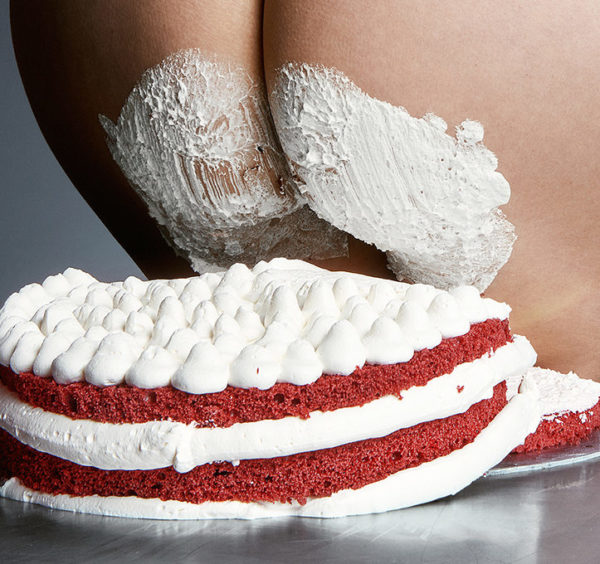 Here comes an article you won’t want to read on an empty stomach… or a full one either. Forget Warhol’s soup, we’re serving political food, mystical food and sexy food straight to your door. From art you can gorge on, to art that looks so good you could sit on it, we bring you five artists who had our taste buds tingling.

Stefanie Herr has a thing about her meat – she likes it dry. These incredible works are made from layers of cardboard, all stacked one on top of the other. The sculptures are photographic reliefs where an image is printed and then sliced, each made the same size as a tray found in a supermarket.

“As always with art, some people are deeply impressed, while others just shake their heads in bewilderment.” – Stefanie Herr.

After choosing their favorite desert for a photograph, volunteers proceeded to get their kit off and squash cakes, butt first. Bon ass-ppetit!

In May 1982, Denes took it upon herself to plant a 2-acre wheat field on landfill in lower Manhattan. After 200 truckloads of soil, 285 hand-dug furrows and 4 four months of hard work, 1000 pounds of wheat was harvested from a plot of land worth well over $4 million dollars. The harvested grain traveled to 28 cities around the world in an exhibition called “The International Art Show for the End of World Hunger,” organized by the Minnesota Museum of Art.

The work calls into question a powerful paradox: wheat represents economics, world trade and most importantly a source of food. But it also called to mind mismanagement, waste and world hunger. Food for thought in the current climate.

4. Maciek Jasik: The Secret Lives of Fruit and Vegetables

Ever wondered what a horned melon secreting a strange, but aesthetically pleasing mint green cloud of smoke would make you feel like? Feast your eyes on this. Jasik’s deliciously sensual series of fruit and vegetables emitting all sorts of alluring colors tell the stories of generations of folklore, magical properties and secret lives of even the most humble vegetation from around the world. Fancy stepping into the garden of mystique? Come aboard…

This artist’s name is Prudence Staite and she is literally obsessed with sculptures made out of food. Anything you want, she makes it. A life size Dita von Cheese? Easy. However, Dita pales in comparison to her other works like the world’s first chocolate room and a collage of Ron Weasley’s face made from ‘Christmas food’. Staite explains better in her own words: “Eating Obama’s face made out of cheese is just so much more interesting than having a normal block of cheddar.”

Ask the Collector with Holly Hager Collecting 101: The Beauty of Prints