Like most Americans this week, soft-sculpture artist Natalie Baxter is unable to escape the most tumultuous presidential elections in our lifetimes between Democratic presidential candidate Hillary Clinton and Republican candidate Donald Trump. Her particular American identity is a layered and movable form. She weaves her experience into her ever growing collection of quilted handguns. Floppy and colorful, they will be hung on walls, flaccidly in upcoming exhibits in Accessory (A Gun Fad) at Redline in Denver, Co (Nov. 4-Dec. 4) and Alison Milne Gallery in Toronto, Ca (Nov. 17-Jan. 1).

Her soft sculpture bloomed out of walking into a living room decked with handguns, familial tradition and a growing feeling of the U.S. violently clawing at its embedded ideas of gender and race. These have violently been brought to the fore with our recent history of racially-charged shootings and in Republican rallies across the country. Read on to hear about her melding of gold lamé, Beatles lyrics, and experiences leading up to Nov. 8, 2016: 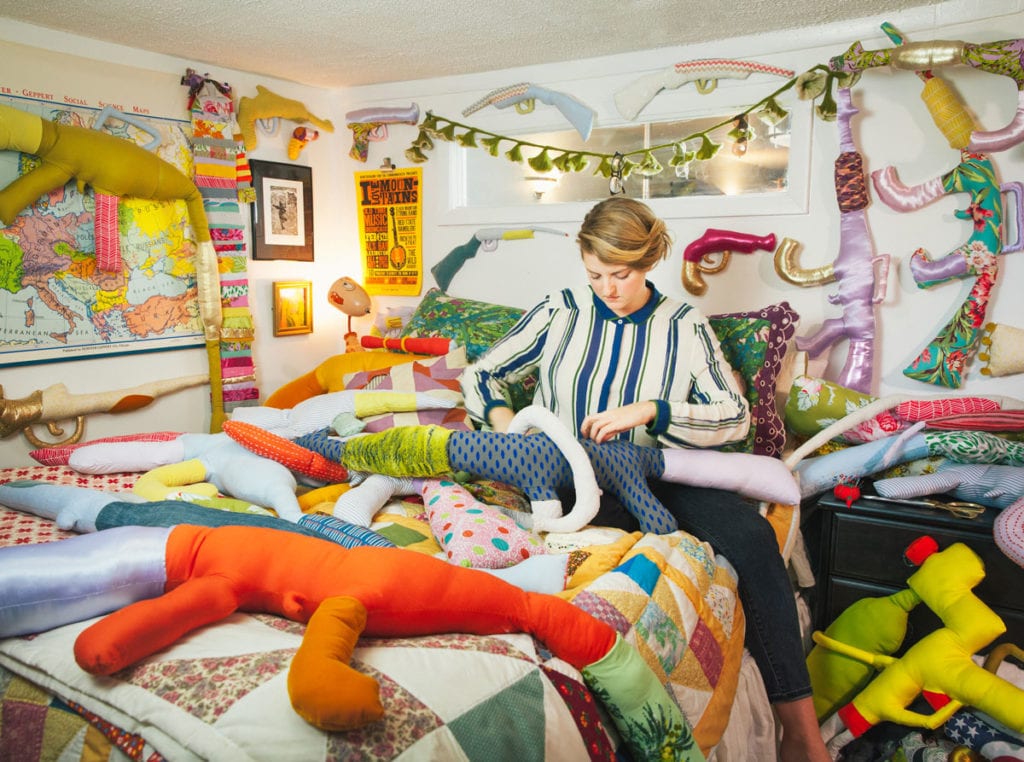 Art Zealous: Could you talk about your art practice?

AZ: Warm Guns and Bloated Flags. Your names are very simple but loaded. What goes into them?

NB: It’s like the Beatles song “Happiness is a Warm Gun.” A pillow is warm, cuddly, and soft. My guns have a pillow quality. Also, a warm gun is one that has just been shot.

To talk in more general terms, our country has a very complicated with guns. I’m from Kentucky, which is a very gun-loving state. I was home for Christmas a few years ago. My friend had a wall of little handguns (real ones). I was doing a lot of sewing at the time and my grandmother had taught me how to quilt. I had just finished a quilt that she and I started and I had never really brought sewing into my art practice. I saw these guns and I wondered what it would look like to have a wall of stuffed, quilted guns. I started making some and that was around the time of Trayvon Martin and Tamir Rice. Black Lives Matter was really heating up and guns were very much in the media. At that time police in New York had been murdered.

AZ: How would describe your experience of people’s feelings on gun control in New York versus Kentucky?

NB: I had been living in New York for a couple years by that time. So that really made me pay attention to it. I was like “wow, you would never see a wall of handguns in an apartment in New York.”

Parts of the state where my grandmother and mom are from, where I learned to quilt is more gun-loving. It’s rural. People’s relationships on what should be done are varying, more so than in New York. Just like what’s happening in this political election: you don’t find a lot of Trump supporters in New York; You do in Kentucky. You don’t find a lot of people in New York toting guns, you do when you live on a farm and your neighbors live far away, so you might think it would be a good idea to have a shotgun. The relationship people have with guns is emotional, it’s very complicated.

Another thing in this project is masculinity and gun ownership. The gun itself is this masculine symbol in Hollywood. Looking at gender and how it’s morphed in the last few years and how it related to gun ownership, there’s this Quartz article about gender roles morphing—women are taking higher roles in the workplace in more traditionally masculine roles—and men [using] gun ownership as a way to regain masculinity.

AZ: Was your choice of soft sculpture also a conscious follow-up to second-wave feminism and the work of post-minimalists like Eva Hesse?

NB: Craft is a feminine [form]. Sewing was passed down in the female lineage of my family. I like the idea of using feminine [work] to emasculate these weapons of power. But also, soft sculpture is funny, and it’s a recognizable object—this gun. Whether you love guns or hate guns, your initial thought is “these are goofy.” It’s a way for people to approach the work.

AZ: When did you start the flags? Was it in direct reaction to the election and the political climate in the US?

NB: I started making the flags right after the [South Carolina] Confederate flag debates and the Charleston shooting. While I was working on the guns, I was obsessively listening to the news about the flag. Some people felt strongly about what it originally stood for. I started the flags when I was at an artist residency at the Wassaic Artist Residency. It was right in the middle of the Democratic and Republican National Conventions. During the Republican one, they were like “there needs to be more flag waving. There are not enough flags.” I think we’re in a polarizing point in our government and what it means to be an American. I was interested in those views and using the symbol of the flag.

AZ: What went into the name Bloated Flag?

NB: I like the idea that they look sluggish. When you’re sitting around and feel bloated, not moving and or making things happen.

AZ: There’s this obsessive quality to your work. How many have you made?

NB: I have around 200 guns—I started counting around 150. It is obsessive. Another part of it—I was doing work in video and film. It is very much a computer world. I was craving something to do. The way I was obsessed with listening to what was happening with those mass shootings… I don’t know how to explain the obsessiveness. My grandmother is the same way. It was like keeping herself busy, making sewing things.

Can’t make it out to Baxter’s upcoming shows in Denver and Colorado? Check out more of her work at online gallery Uprise Art (read about it here).

The Intersection of Fashion and Art: Exhibits to See in 2017