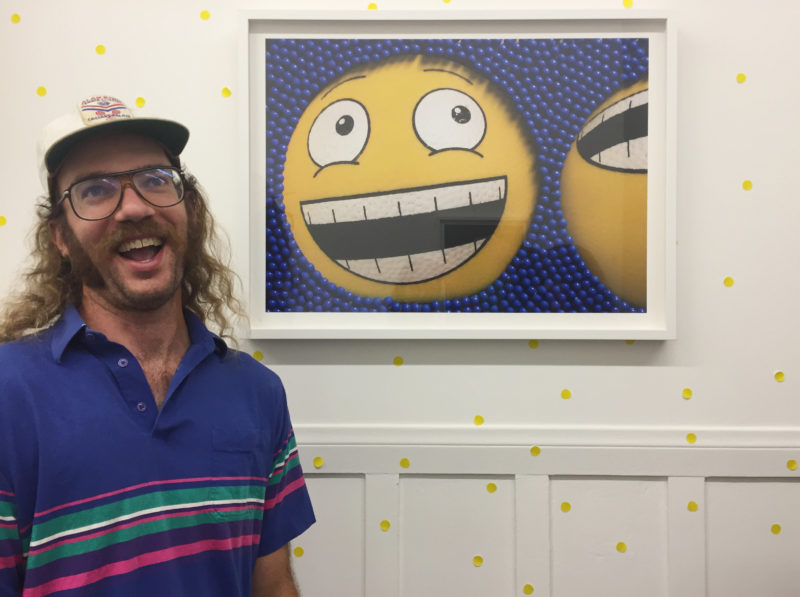 Do you remember Fantasia? Chances are if you were born in… oh, the last half–century you have at least a vague recollection of Disney’s animated film-sical. Or perhaps you can recall that childhood sense of delight as the magician pulled a bunny out of his hat, chose the right card, or made his assistant disappear?

In a way, humanity’s greatest fears and desires have been rooted in the notion of ‘magic.’ We want the ability to perform things that would make our lives easier and more fantastic, whether it’s teleportation or simply for that pizza to come over to us. And though many of us never received our Hogwarts acceptance letters, you must admit that our lives must seem fairly magical to anybody living before the Industrial Revolution. Because magic isn’t just about defying the current laws of time or physics – ultimately, it’s about the mystery and excitement of something you can’t quite put a finger on, and don’t necessarily want to put into words or proofs. In many ways, there’s only a thin line between technology (or conceivable technology) and magic, or even showmanship and magic. That difference lies in a certain kind of aura and reception as sustained by performer and audience – a mutual agreement that here, something surprising happens.

In the following two art shows, Art Zealous explores that mix of fascination and mystery reminiscent of a traditional magic show – underlined by an unsettling aimlessness and violence very much not in the magician’s oeuvre. Both in Los Angeles, A Season in He’ll and CRUSHES are full-blown, multimedia installations by artists Alex Da Corte and Paul Pescador exploring the strangeness of the ultra-familiar. Their cast of quotidian objects evoke narratives of consumption and disruption, of love and tragedy.

In order to immerse their audiences, both Da Corte and Pescador take full control of the space. Da Corte’s casts hyper-contrasting neon lights of green, red, and purple, while Pescador turns to a more carefree application of yellow sticker-dots.

These markers of space are then reiterated in the video works so that viewers feel as if the taped acts have been put on especially for them, live in front of their eyes. It cleverly upsets our sense of time and space, donning the space itself a sense of ceremonial importance.

It’s no coincidence that both the work of Alex da Corte and Paul Pescador has been described as “heartbreaking.” Whether playing or performing, the objects in their works are imbued with an off-kilter sanctity as they interact with human hands or with each other.

In Da Corte’s installation, the items around the room act like relics of the performance. From a giant black hat to hamburger chairs, to miscellaneous items arranged in a puzzling yet deliberate tableau, Da Corte’s objects all seem to originate from a previous act. Though commanding, they seem a part of something larger, more majestic, more frightening.

On the other hand, Paul Pescador’s prints and tiny sculpture (also plastered in little yellow dots) seem to be actively involved in their own story. They are performative, yes, but also feel slightly less targeted as a coherent show than as awkward moments accidentally frozen and displayed. They evoke more direct imagination and emotion, especially because one is not sure whether they are speaking to each other or the audience. 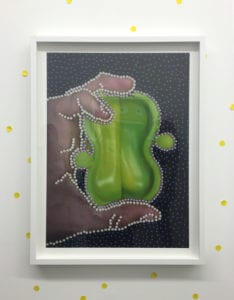 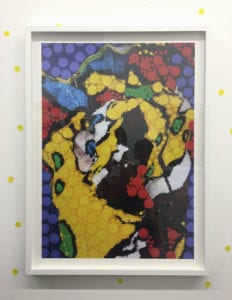 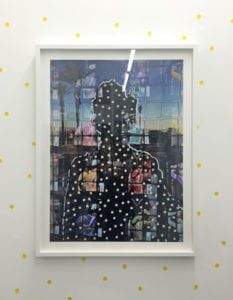 These differences are even more pronounced in the two artists’ video works, where the threads of each series are further established.

In Alex Da Corte’s videos, the role of magician is fully embraced – the actor looks directly towards us, taunting us to follow his act. A sense of coherence is maintained, with each video featuring mostly continuous shots.

Paul Pescador, on the other hand, toys with the audience in a manner reminiscent of Da Corte’s earlier video piece, Chelsea Hotel No. 2. Pescador’s 20-minute video is composed of spliced-up mini-narratives featuring recurring objects, textures, and actions. It is both easier and harder to look away, and the objects take dominance. Occasionally one catches a glimpse of the artist’s full body, but only in a removed manner.

Though the two artists both seem enchanted with and in enchantment of pop consumerism, the ‘magic’ which Alex Da Corte and Paul Pescador put on are of two distinct varieties and intents. Alex Da Corte is concerned with the consumptive psychology and absorption of contemporary products – an archaeological practice half-crying, half-laughing at the absurdity and pleasure of mass consumerism today.

Paul Pescador, on the other hand, is interested in “the boundaries between his inner life and his physical apprehension of the world” (Ivan Ramos, Everything Becomes Form). His objects seem even more capable of expressing emotions than human subjects can; their very lack of inner life allows them to strike deep and resonant chords as the separation between our technology and ourselves become blurrier.