Timothy Hull is one cultivated artist. He was born in NYC but grew up on his family’s apple farm and winery in a culturally active small town a few hills away from the city. Hull studied at New York University with a studio arts focus and received his Masters at Parsons School of Design, but as an undergrad, he was obsessed with Italy and spent most of his college experience at the NYU Florence campus and even stayed in Florence post-graduation.

Now, this Brooklyn-based artist has some seriously cool artwork with an ancient Mediterranean chic look and feel. Hull draws inspiration from Constantine P. Cavafy, a Greek poet whose consciously individual style earned him a place among the most important figures not only in Greek poetry, but in Western poetry as well. Hull references him a lot when speaking about his work and musings.

AZ: How do you use shapes to communicate different themes in your work?

TH: I don’t think I’m a “shape” artist, more so I use color in the way you mean – color pulls the narrative if there is one. Color hints at the light reflecting off the water that reflects the column at the ruins of Delos, for instance. There’s an off-white, a lush pink, a pale blue, a cool gray, it’s all there in “CP Cavafy.” I like to think my work is in parallel play with CP Cavafy’s poems.

AZ: It appears as though there are Greek influences in your work. Please elaborate on that.

TH: Well, there you go… like I said with Cavafy, it’s Classical Greek influence but seen through a contemporary lens. There’s a real compression and transparent overlap in Cavafy’s poems that fold antiquity into his own lived experience in Alexandria. He captures the homosexual experience in ancient Greece and makes it contemporary, and that’s inspiring to me. I try to elaborate on his accomplishments.

AZ: Tell us about your exhibition in Los Angeles this summer.

TH: This was a show that spoke directly from a particular Cavafy poem, “For Ammonis, Who Died at 29 in 610.” That work I showed in LA further articulated the complex territory of language, memory, history, and sexuality at play within my painting. With richly steeped allusions to the ancient world and the Greek language, Cavafy’s poetry merged classical and homoerotic themes, often referencing his home city of Alexandria and its confluence of Latin, Greek, Coptic and Arabic languages and culture.

His 1917 poem “For Ammonis, Who Died at 29, in 610” is composed as an epitaph mourning not only the death of a beloved young poet but also Alexandria’s broader shift away from Greek language and culture in the 7th century. I found this a very rich and intoxicating point to jump off and create from. 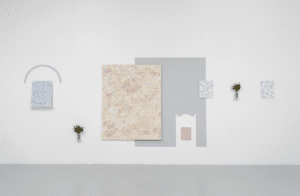 TH: I just came off a big showing of new work at EXPO Chicago with ASHES/ASHES, which was great fun and a good experience. I’ve got a few projects on the build-up right now, but I’m also very focused on my teaching painting and drawing at various colleges in the area.

Ask the Collector with Holly Hager: Collecting 101—Your Eye and Your Gut