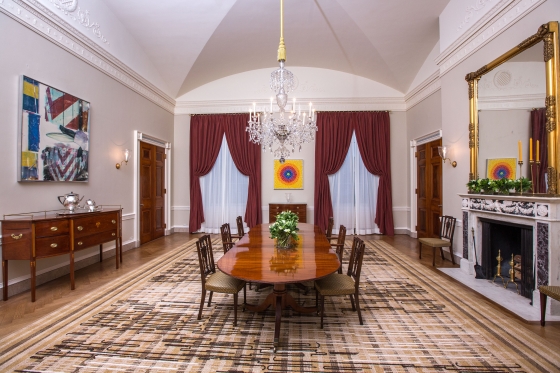 Happy Birthday Mr. President! Upon his solemn departure from the Whitehouse and in honor of his birthday, we wanted to toast to probably one of the world’s favorite Presidents. Obama waltzed into the Oval and gave the Whitehouse the greatest modern art makeover we’ve ever seen.

So let’s#TBT it, let’s take a look back on President Obama’s best artistic moment in the Whitehouse. From Ed Ruscha, Josef Albers, Glenn Ligon, George Catlin, Mark Rothko and Alma Thomas, he brought our favorites into his new home. Here are 6 contemporary artworks chosen by your very own president.

We’re all indecisive sometimes, Ed Ruscha gets it and apparently so does Obama. Being President, there have been times when he was indecisive or caught in a tough position and Ed Ruscha captures moments like that perfectly. Paintings like this are reminders that we’re all people and sometimes not knowing is okay.

Obama grew up in Hawaii, his father was from Kenya, and his middle name is Hussein. Probably one of the most cultured Presidents we have ever had in history, this painting by the conceptual artist, Glenn Lignon embodies that.

This is the centerpiece in the dining room at the Whitehouse. A colorful mosaic-looking painting brings life to the once archaic interiors at the Whitehouse. It’s called “resurrection” for a reason. Obama and Michelle brought the contemporary vibe into this historical building.

Josef Albers is one of the most well-known graphic designers and artists from Germany. The author of Interaction of Color, his work is abstract and never goes unnoticed. Homage to the Square: Midday is sitting somewhere in the Whitehouse, soaking up the glory.

Obama and Michelle weren’t kidding when they decided to give their new a home a modern makeover. They filled it with a bunch of wildly known contemporary pieces that they borrowed from the Smithsonian. One of which is Early Bloomer by the great Robert Rauschenberg that is also sitting in the dining room of the Whitehouse.

Of course the Obama family chose a Rothko! It’s all about the abstract in the Whitehouse. From 18th century artwork to the greatest contemporary artists we still love today, major changes were made in the Whitehouse in terms of art. There’s no telling what the future holds for the Whitehouse and the new artworks that will call it home in November, but we have a feeling Hillary will make us proud.

The Top 10 Google Doodles of the Past Year

Young New Yorkers for the Philharmonic Party for Winter Benefit