Situated on the upper floors of the old Moynihan post office, the curator-driven fair is as unique and immersive as ever. The fair, which was originally located in a Nolita school house, has maintained its creative vibe in the former post office building. With each hallway of the four-story show decked with art and filled with excited visitors, it is easy to get some elementary school flashbacks. While that may not sound appealing to many who have no desire to return to school, it is that youthful, creative, and carefree feeling that makes SPRING/BREAK stand out amongst its competitors. By allowing the Moynihan station to remain unaltered in its decrepit state, the co-directors Ambre Kelly and Andrew Gori have allowed the visitor to feel the sensation, not of a sleek and separated art world, but one that is evolving, changing, and most of all approachable. 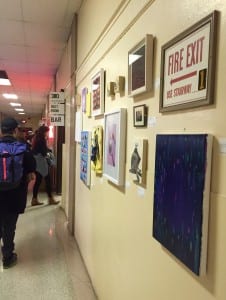 This year’s theme is ⌘COPY⌘PASTE which is meant to address the ever-growing issue of “new appropriation, copyright pilfer, whistleblower mélange, and the art historical miss-match.” The theme did not seem like a stretch for artists whose passion for the issue is not lost in their pieces. The issue was addressed directly by many of the curators, like A. More who opened up “The Pineapple Shop” which featured hundreds of pieces of merchandise, all with the same image of Sara Clarken’s The Pineapple, which apparently has been reproduced thousands of times without Clarken receiving a dime. “She just wanted to take her art back, and also stick it to them!” says one of the workers in the shop.

The theme reached people in many different ways, not just from the pure copy and paste perspective but also addressing the value of imagery itself of which consumer culture came into play for many artists. It is perhaps Alfred Steiner’s LV DIY curated by 101/Exhibit, that will stand out for most when it comes to the issue of consumer culture, and not just because Steiner happens to be situated in one of the first rooms you will encounter, but because it addresses so directly the place that fashion holds within our consumer world. Steiner’s show consists mainly of clothing items, which have been drawn on by insulation foam to look as if they have the LV symbols on them.

SPRING/BREAK has become a staple in the world of emerging multimedia art over the years and this year with its ⌘COPY⌘PASTE, it has maintained its reputation as a leader. The fair will run from Tuesday, March 2nd to Monday, March 7th at the Skylight Moynahan Station, and is worth braving Midtown for.

Whimsical Escapes in the Form of an Adult Coloring Book