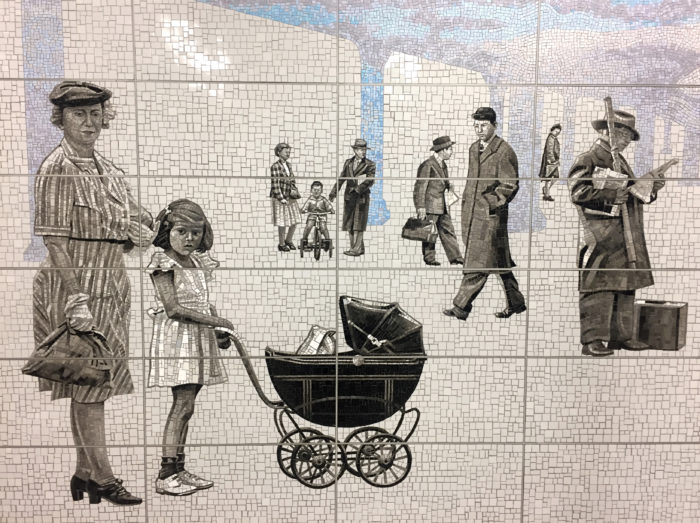 88 years after the initial proposal of the 2nd Avenue subway line, Q trains are finally running between 63rd and 96th Streets. MTA used $4.5 million to adorn the new stations with art and they certainly spent that money wisely. Join us on a journey underground as we check out the phenomenal tile-work installations in each of the four stations, which make up the largest commitment New York City has made to public art in 50 years.

The new line has been decades in the making, and the artists have been working on their projects for nearly a decade as well. We were lucky enough to chat with Jean Shin about how she came up with her idea for the 63rd Street station, MTA’s selection process, and the challenges she faced in bringing her vision to life.

“I began working on this project in 2010 when MTA Arts and Design selected me as a finalist for the 63rd Street Station, the first of the 2nd Ave Subway art commissions,” Shin told us. “MTA has a rigorous selection process and I was competing against many art world celebrities. I was thrilled and honored that the panel selected me.” It’s true that out of the group of selected artists, which also includes Sarah Sze, Chuck Close and Vik Muniz, Jean Shin is certainly the outlier in terms of art world notoriety. However, that’s not to downplay her accomplishments. Her work has been exhibited at renowned museums across the country including MoMA, the Smithsonian American Art Museum and the Museum of Fine Arts in Boston.

It’s interesting to note that most of the artists who worked on the 2nd Avenue subway project aren’t known for working with mosaic tiles. Vik Muniz’s work might be the most similar since he uses bits of unexpected, everyday materials to compose images from art history and pop culture, but Chuck Close is, of course, known for his painted portraits, while Sarah Sze and Jean Shin work mainly in sculpture and installation.

Shin’s installations give abandoned objects new life as monumental reflections of individuals’ personal lives as well as expressions of greater community issues. When asked about the relationship between her regular work and her work in the 63rd St station, she told us, “Like many of my installations that transform discarded materials and consumer cast-offs, in the 2nd Ave Subway commission I’m exploring this at a civil scale by featuring the loss of the historic elevated tracks during the rebuilding of New York City.”

During her research, Shin found old photographs in the Transit Museum and the New York Historical Society Archives that documented the dismantling of the El trains on 2nd Ave in the 1940s and of the 3rd Ave El in the 1950s, which became the primary sources of inspiration for the work. The artist decided to transform the 63rd Street Station into a time machine of sorts, surrounding today’s commuters with images of New Yorkers who once commuted on the El that stood in the same spot nearly 7 decades ago. “I wanted the new permanent work to connect to this landmark moment in New York City’s history and bring this story to public life, what was lost and gained in the making of the 2nd Ave Subway,” she said.

It is fascinating just how differently each artist chose to approach this project and utilize the medium of tile-work. In Sarah Sze’s “Blueprint for a Landscape” at the 96th Street station, the artist created an immersive experience that unfolds like a set of architectural plans, incorporating familiar objects into the details. She chose the color blue because it’s the color used in traditional ceramic making and had her imagery applied directly to large porcelain wall tiles. (Photo caption: Over 4,300 unique porcelain wall tiles were fabricated by Spanish tiling companies Alcalagres and Estudio Cerámico.)

Chuck Close, on the other hand, used several different styles of incredibly detailed tile work for 12 hyper-realistic portraits of cultural figures from Lou Reed to Kara Walker at 86th Street.

For “Perfect Strangers,” Vik Muniz filled the 72nd Street station with over three dozen off-beat mosaic characters who appear to be waiting for the train. Muniz had friends and family model for him and German fabricator Franz Mayer of Munich helped translate the resulting photographs into mosaics.

Shin, too, used several different fabricators to bring her designs to life: Stephen Miotto for mosaics, Frank Giorgini for ceramics and Tom Patti for glass. She told us of the experience, “The fabricators did a fantastic job and it was great to engage each of them at this level of their craftsmanship. However, one of the more challenging parts was that I essentially had three major project deadlines happening at the same time.”

When asked about other difficulties she faced while working on “Elevated,” Shin said, “The other challenge was working with old archive photographs. Even if you scan them at high resolution, there’s not enough resolution to get the intricate effect I wanted. Reconstructing and redrawing these images to ready them for my fabricators took almost an entire year.  It took nearly 7 years in total from the idea, to design and fabrication and then waiting for the 2nd Ave Subway’s opening in 2017. At the end, it was well worth the wait!” We couldn’t agree more.