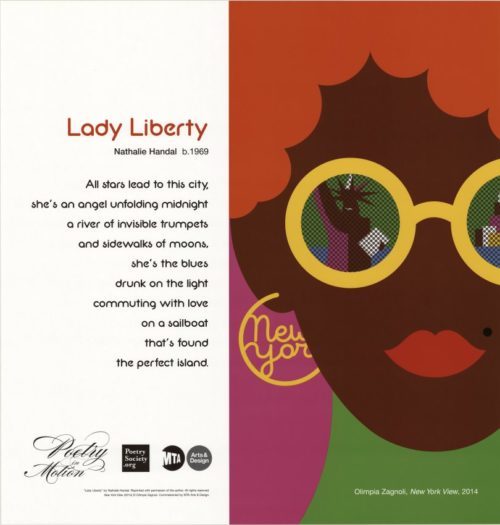 On your way to work, home from school or out to meet friends, look away from your screen and you may just take in some artwork and a poem. Thanks to MTA New York City Transit, you don’t need to go out of your way to get your daily dose of culture. If you’re in New York City, culture comes to you.

It all began with Walt Whitman. In 1992, New York subway cars displayed a verse from Whitman’s poem “Crossing Brooklyn Ferry.” This began a collaborative program between Poetry Society of America and MTA New York City Transit called Poetry in Motion, which has since become a staple to subway and bus riders in New York.

On its 25th anniversary, the program is being celebrated with an exhibition at the New York Transit Museum’s Grand Central Gallery Annex through October 28. Poetry in Motion at 25 features a selection of the original subway and bus cards that have appeared in the New York City Transit system during the history of Poetry in Motion.

During these 25 years, Poetry in Motion has shared a selection of short verses from a variety of published poets, providing accessibility to the arts for millions of riders. After a hiatus between 2008 and 2011, it returned with new life – administered by MTA Arts & Design, the program began to incorporate artworks onto the posters, creating a dialogue between poetry and art. The collection of poems and artworks speaks to the diversity of New York City and the people who live, work and visit it. Poetry in Motion has presented more than 200 poems, adding value to the daily routine of millions of subway and bus riders.  Featured poets, from Sappho and Sylvia Plath to Rita Dove and Nikki Giovanni, have been joined by artists such as Mickalene Thomas, Olimpia Zagnoli, Holly Sears and Raúl Colón.

On Tuesday, September 25, a gallery talk will take place at the Transit Museum’s Annex, when Amy Hausmann, Senior Curator and Deputy Director of Collections & Exhibitions, hosts a tour of the exhibition.

In addition, a book titled The Best Of Poetry In Motion: Celebrating Twenty-Five Years On Subways And Buses, which was edited by Alice Quinn and features a forward by New York poet Billy Collins, showcases 100 Poetry in Motion poems, as well as 22 that reflect a collaboration with artists.

The New York Transit Museum Annex is located in the shuttle passage on 42nd Street and Park Avenue in Grand Central Terminal. Gallery Hours: Monday through Friday, 8am to 8pm; Saturday and Sunday, 10am to 6pm. More info: nytransitmuseum.org.