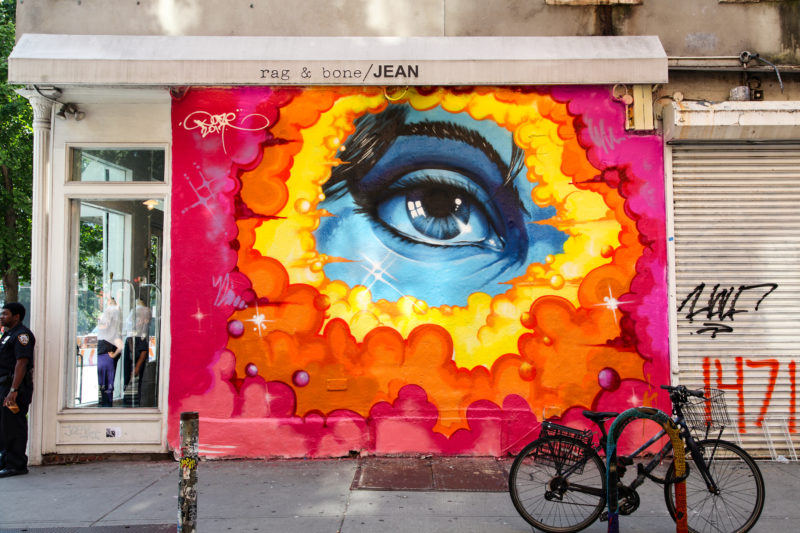 From its origins in New York in 2002, rag & bone became cool quickly by combining British heritage with sleek modern design. Today, the brand has become synonymous with classic easy to wear clothing while incorporating edgy understated New York aesthetic. Inspired by an aspiration to create beautifully constructed clothes, rag & bone honors the importance of quality, expert craftsmanship and attention to detail in its stylish and sharp clothing.

rag & bone operates 26 stores worldwide, ten of which are in New York City. In July 2010, the brand opened a store on 73 E. Houston Street in trendy Nolita. Marcus Wainwright, CEO, Founder and Creative Director is a big supporter of the arts, so when the store opened near a large blank wall adjacent to the entrance, he knew it would be a perfect mural haven. And just like that, “The Houston Project” commenced.

The current masterpiece on Houston Street is by Chris “Daze” Ellis, who began his career painting New York City subways in the mid 70s.  The first piece of work Daze sold was an impromptu collaboration with Michel Basquiat and his paintings have been purchased by Madonna, Eric Clapton and many other art aficionados – so as you can imagine, the mural is exquisite.

The art doesn’t stop on the street, recently rag & bone collaborated on a sweatshirt with Houston Project artist, Typoe, and the brand hopes to do more of those collaborations moving forward.

New Yorkers: be sure to pop by Houston Street to check out Daze and the many other artists that will participate – who knows, perhaps you’ll wind up with a swanky leather jacket.

Eating Dumplings for a Cause with @Curatorial at Chinatown Get Down