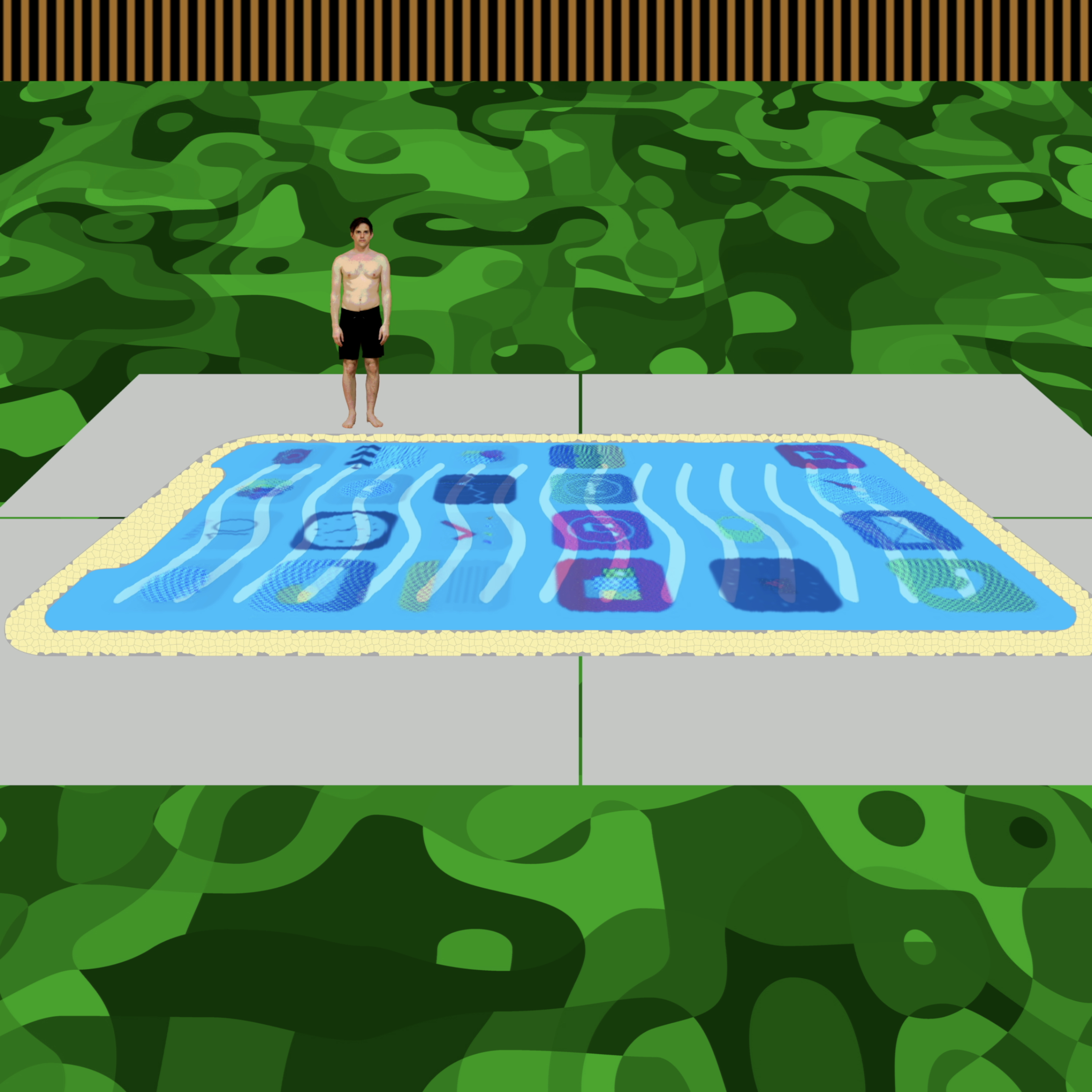 On October 9, 2020 performance art duo Princess launched an experimental video cycle ​@1minworld​ on Instagram. ​Comprised of Alexis Gideon​ and Michael O’Neill, Princess draws on Gideon and O’Neill’s background in the Chicago queer DIY art scene to create video and performance art that self-reflexively critiques the media platforms it lives on.

@1minworld’​ s Instagram account functions simultaneously as an online art gallery and video music album. The project includes a series of 15 distinct one-minute videos that take the platform’s constraints as a challenge to be reckoned with.

The video cycle’s primary-colored bubblegum visuals are deployed as a calculated offering to the Instagram algorithm, while the songs’ content highlights the discontents of our social media age: filter bubbles, surveillance capitalism, and shortened attention spans, to name a few. This combination of accessible aesthetics and critical, self-aware messaging has long been a feature of Princess’ practice.

We caught up with Gideon and O’Neill to discuss the creation of @1minworld, the role of music in digital media and their project, and more. Read on for the full interview!

Art Zealous: What challenges were you anticipating regarding the distinction between live performance and pre-recorded video during the creation of @1minworld?

Alexis Gideon: It was really important for us to create an experience that didn’t feel like another Zoom meeting, or live stream from a studio. People are experiencing such a fatigue with those formats. And so many streamed events right now feel like a pale shadow of what live experiences used to be. We wanted to make the performance feel as immersive and as compelling as a live event, by doing something different and using the fact that it was pre-recorded in order to do so.

Michael O’Neill: Ben Harrison (Curator of Performing Arts at the Andy Warhol Museum), invited us to collaborate with him on a version of the Warhol: SoundSeries that was built specifically for this moment. We all agreed that we could leverage the fact that it would be pre-recorded and therefore gain a more cinematic production value, rather than just adapt a live performance to a quarantined world.

AG: During our creative process, we thought (spoiler alert) what if our “live” selves, on the stage of the Warhol Theater, become animated and walk into the @1minworld video — the digital world of the phone. It plays on the meta nature of the piece itself, which is all about being trapped in this digital universe, in our phones and in social media. It also disrupts the audience’s expectation of a quarantine performance.

AZ: Other than your own personal experience on the platform, what resources, readings, philosophies did you turn to when formulating this project?

AG: Michael and I were in constant discussion, looking inward to see how we were falling into the traps of social media ourselves — closing our eyes at night and seeing the scrolling light and the constant buzz of social media. How it was making us feel, and how we were being constantly advertised to, and how our information is being constantly bought and sold. How we as a society have decided to allow ourselves to be commodified.

Michael and I also discussed the polarizing effects of social media. The line in the song “TROUBLING:” “We’re in trouble/Communities all in bubbles/Gotten so bad can’t speak to my own dad” came out of a conversation Michael and I had about his relationship with his father. Social media and internet news are creating feedback loops that persistently reinforce your own viewpoint. We are losing the ability to see any other point-of-view than our own.

In addition to the conversations we were having, it seemed like all the things we were coming in contact with related in one way or another to the piece. I was reading the Javier Marías trilogy Your Face Tomorrow, which talks about the idea of narrative fear. In a world that is not obviously structured around “God” anymore, people still have a need to feel like their lives should be recorded and accounted for to prove they exist. I felt like that related to the compulsive need for validation within social media and the cataloging of every mundane thing a person does.

MO: I remember reading articles about how the effects of social media are leading to increased anxiety and depression – feelings that would later be enhanced by the pandemic. And I remember reading multiple stories about people falling off cliffs to their death while trying to get the best selfie, which directly informed the video for “LIKING.”

It’s interesting that The Social Dilemma film was released almost at the same time as the premiere of @1minworld. Although it wasn’t something we used as a resource while in the creation phase, hearing from original programmers of social media platforms and getting their views on the inherent dangers in the platforms validated our work and has informed the conversations we’re having now.

AZ: I’m curious about your use of music/soundtrack for this project, especially considering that statistically most Instagram users do not listen to videos with the music on. If people were to unmute their Instagram feeds for a minute, what would they expect to encounter from your content?

MO:@1minworld exists on Instagram to be visited as if you’re visiting a gallery. Instagram is the host gallery, if you will, and it’s intended to be sought out by the viewer. There was only one moment, when we initially posted the videos and made them live, that the video content would have appeared in people’s feeds. But it’s not an active profile that is intended to be a personality, it’s intended to be an exhibit. In that sense, the piece in and of itself is challenging what the platform could be used for. It ignores the reward mechanism of the algorithm, which is also part of the piece.

AG: As for what someone would hear, they could expect to encounter a one minute song (Instagram’s video time limit) that utilizes the classic “verse – chorus – verse” pop structure. We really wanted each video to have a clear beginning, middle and end and to be accessible in that way. There’s a lot of hip hop, electronic production and beats that are the foundation underneath a diverse musicality that remains cohesive. The use of music as a soundtrack also enhances the Lichtenstein-esque pop art references, pushing the content further into parody and satire.

AZ: I love that “HACKING” seems to provide commentary on how Instagram is largely composed of simple, bite-sized information that is almost embarrassingly obvious, all while narrating that these simple behaviors are “life hacks.” Do you find yourself thinking about small, insignificant actions throughout the day as “life hacks”? Where did the inspiration for this come from if there are specific videos or posts in mind?

AG: I remember waking up one morning and the song “HACKING” just kind of came out: “Wake up in the morning, that’s a life hack…” The whole thing was written pretty quickly after that.

MO: I would add that what’s implied in “HACKING”, is the hashtag — #lifehack. If somebody figured out a simple act to make life easier, that’s great. There’s nothing wrong with sharing that type of information. It’s the packaging of it into a hashtag that becomes a weird popularity seeking performative act. That’s kind of the thing that we’re making fun of.

AZ: How would you say your work together has evolved over the 20-year span you have been collaborating? How has the changing digital landscape altered your approach?

MO: We have always been interested in the queerness of the music, not fitting into one category and not molding into a specific genre, trying to be many things at once. But in the early days, that could have meant a very frenetic piece of music with some banjo and recorder over noise rock with a hip hop beat. That made a lot of sense to us at the time, but it was also alienating to our audience. So we’ve definitely matured over the years and we’ve honed in on the challenging aspects of our work and developed more sophisticated content that is more inviting.

AG: Another thing I think that has matured is our personal and working relationships. We’ve always loved each other very much, but we’ve learned how to be better communicators in time. In our working relationship, we have found a way to give each other a lot of space and support each other’s contributions in a way that feels really healthy.

The physical landscape has also changed since Michael and I don’t live in the same city anymore. Now, we send things back and forth to each other through the internet all the time, but that was not really possible when we started working together. There were a couple of times in the past when we sent CDs to each other in the mail, which is kind of hilarious to think of now. But these days that is much easier, so.. that’s a life hack.

AZ: What is your hope or goal for viewers of @1minworld? What do you want them to take away from the project?

AG: We’re living through an incredibly isolating time right now due to politics as well as Covid-19. And although social media and our phones are helping keep us connected to our communities and to other people, they’re also making us feel much more alone. One of our big goals for people viewing this is for them to feel seen and understood and to feel a little less isolated in knowing that these feelings are shared by other people as well. We’re in this isolated fragmented time together.

MO: I hope it makes them want to throw their phone off a bridge.