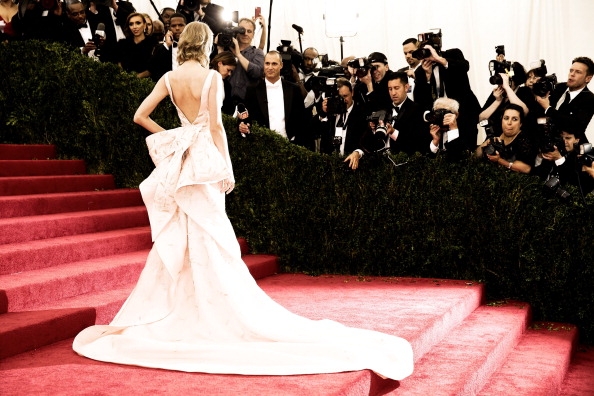 It’s that time of year again! The biggest night in art and fashion is right around the corner and in anticipation of this year’s Met Gala we decided to take a trip through the Gala’s of the past and pick some of our all time fashion moments. Also, don’t forget to check back in with us after this year’s Gala to see who we picked as the best dressed!

All of Blake Lively’s Met Gala dresses have been amazing, but this Gucci dress paired with the best accessory of all, Ryan Reynolds, puts Blake’s 2014 look at the top of the list.

The barely-there nude bedazzled dress has been done many times over but no one quite pulls it off like Cher and the OG sparkle king Bob Mackie.

Grace Kelly, um we mean Doutzen Kroes, was the epitome of classic Hollywood glamour in this 2010 Zac Posen dress. And let’s be honest the Cinderella-esque blue paired with a full-on tulle skirt fulfills all of our childhood fantasies of what a ball gown should look like.

While the slinky Versace silk dress may seem a little bit outdated at this point, you have got to give it to Gisele for pulling off this impeccably tailored,  jaw-dropping number.

A Met Gala regular is there ever was one, SJP has never been one to disappoint, but there was just something about this 2014 Oscar de la Renta dress both classical in form and unique in style, that we could simply not ignore.

Kurkova gets double the points for this ensemble, first because I mean just look at that dress, the structure is simply fantastic, and secondly because she was one of a small handful of attendees last year whose attire was related to the theme, China Through the looking glass.

This one may be a bit controversial, as Kim K got a LOT of slack for this Givenchy number, but frankly we figure if you are that pregnant and willing to squeeze yourself into to a skin-tight head-to-toe floral number, and present yourself to the entire fashion and art world, you deserve to be recognized for your bravery.

Kate Moss looked like a golden goddess in this 2009 Marc Jacobs number, and that’s an impressive feat because lets be honest it’s pretty hard to pull off a head turban.

This 2004 Maggie Norria John Galliano combo simply could not be ignored. While it was definitely one of the more controversial outfits of the year, one simply cannot deny the sheer artistry and exuberance that went into this piece.

Texas Treasures: Your Guide to the Dallas Art Fair

10 Art-Mystery Books to Snuggle Up to This Winter