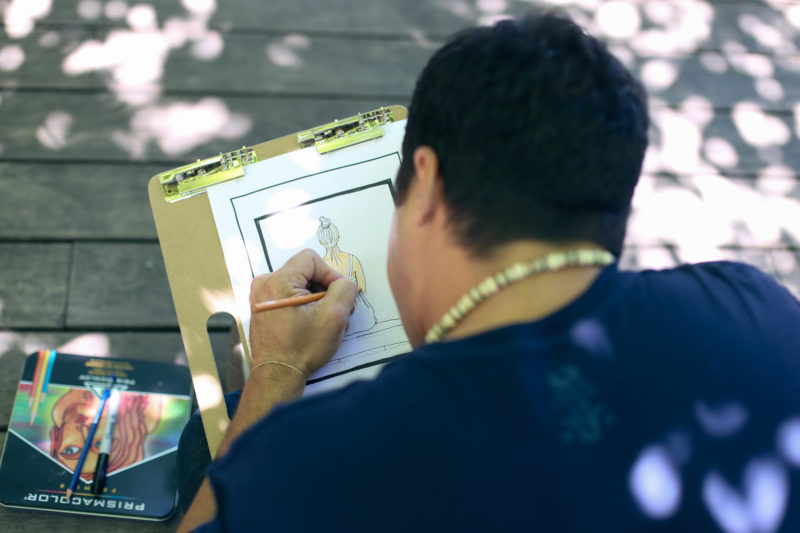 For three days in July, Puerto Rican artist Jesús “Bubu” Negrón sat cross-legged on the wooden floor of the High Line, drawing portraits of passersby’s backs as part of an ongoing project that he started in 2002. He hands his participants the original drawing and keeps a photocopy for himself, eventually creating a whole new artwork with the collected drawings. His Back Portraits first saw the light of day at an art fair, and since then, he’s exhibited his work at places like MECA Art Fair (2017), Henrique Faria (2016), and the Whitney Biennial (2006).

Another of his projects from 2002 is Primeros Auxilios, or “First Aid,” in which he created a plaster cast to repair the broken leg of a public sculpture that had long since been deteriorating. His actions led to city officials restoring the sculpture within six months of his intervention, and this isn’t the only time this artist has had a run-in with the government.

Bubu had more to say about his more controversial artworks when we caught up with him (and his translator) before one of his five-hours sessions at the High Line. Keep reading to find out what he had to say!

Art Zealous: Did you always want to be an artist?

Jesús “Bubu” Negrón: Bueno, of course. Throughout my life, I’ve always been drawing. I started out helping out projects in Puerto Rico. First, I was a volunteer helping all the other artists, but in the process I came to understand contemporary art. So I started to make some art, people liked it, and now I’m here.

I try to do many, many styles of art because for me, I think the idea is the most important part of a project. The materials and media are secondary, so I don’t pick one to use specifically. If the idea needs drawing, or if the idea needs video, I will use it. It’s conceptual.

AZ: Where did the nickname Bubu come from?

JN: (laughs) My family gave me this nickname; it doesn’t really mean anything. Everybody knows me by Bubu, so I use Bubu because Jesus is more common.

AZ: Do you have a morning routine?

JN: I try. I like to meditate in the mornings, for about 40 minutes, in the Buddhist way before I start to make art.

AZ: What is the art scene like in Puerto Rico?

JN: It’s super different from here in New York. The Puerto Rican art scene is a little art scene, since we are a little island, but it’s very strong and very, very juntos, very together. (Here, he brought his two fists together.) Due to different circumstances, we make art different than here. We live in the tropic, we’re a territory of the United States, we have our own style that we’re proud of.

AZ: You’ve been doing Back Portraits since 2002. That’s 15 years! Why did you begin doing them and has it changed over the years?

JN: Yes, it’s a very old project. This is a project that is very simple. This is one of those projects you just enjoy and don’t think too much about super big questions. Mostly, it’s just for contact with the people and having fun. So maybe the style has changed some, but the concept is still the same.

AZ: But some of your other work sometimes has led the government or police to take action, like with Primeros Auxilios. So how has your relationship with authorities evolved, and how has that affected your work?

JN: It’s what I told you before: Puerto Rico has a different situation. My work comes out of living in this environment and just observing the things that are going on in my neighborhood. My actions and art are not hidden. These are parts of the neighborhood and things that people see every day. For example, with the statue, people just noticed: “Oh, this thing is broken! The government isn’t doing anything.” So it’s more like a vigilante effort to fix the surroundings and take ownership in doing things that the government hasn’t done or doesn’t notice or doesn’t deem important. With these actions, they’re done in a way that people take notice so that things do happen and changes are made.

AZ: Some people might interpret your actions as those of a community organizer or an activist than of a traditional artist. How do you see yourself?

JN: I still live in Puerto Rico, so even as I show my work and do things in other places of the world, I don’t forget where I’m from and who my neighbors are. I realize that I have an opportunity to express myself within the art world by doing these kinds of actions by using art as a tool to do good, so I’m trying to combine the two parallel worlds of activism and artistry. Just because I’m an artist, it doesn’t mean I can’t use my position to give back to people. Say, for example, doctors who use medicine to help their community. They’re using what they know to reach other people. I’m an artist, so I use art, it’s my toolset. But this is also just one aspect of my projects. A lot of my work involves the elevation of different art forms, like craft and folk lore and things that aren’t necessarily considered “high art,” to a higher level.

AZ: What are you currently working on?

JN: I just returned from a two-month residency in China, so now that I’m back, I’m going to go back to doing more community-based projects. I’m part of a community organization called La Brigada PDT, or the Puerta de Tierra Brigade. Puerta de Tierra is the neighborhood I live in, and I’d like to do more community engaging projects and also some art classes.

AZ: Is there an idea that you’ve been wanting to do for a while but perhaps haven’t had the time/resources to complete?

JN: I’d love to be able to do more with the Brigade, but it’s a more specific example of what’s going on in Puerto Rico right now. There’s really a need for resources and funds, but there’s just a kind of paralysis going on in the government right now. I’d love to eventually build a community center, or structures like that, in the neighborhood.

AZ: Do you have any hidden talents?

JN: Hidden? I don’t know if this is hidden, but I’m a musician. I play guitar on bass, and I’m part of a group of artists who all get together and play music together called La Exitosa. It translates to “The Successful,” which is a pun since we only cover music.

JN: I love salsa music! My favorite is Chamaco Ramirez.

Learn more about art at the High Line here, and find more photos of The Back Portrait here.

High-lights from Four Creative Ladies Who Use Cannabis

Tasting the Future at the Lofoten International Art Festival