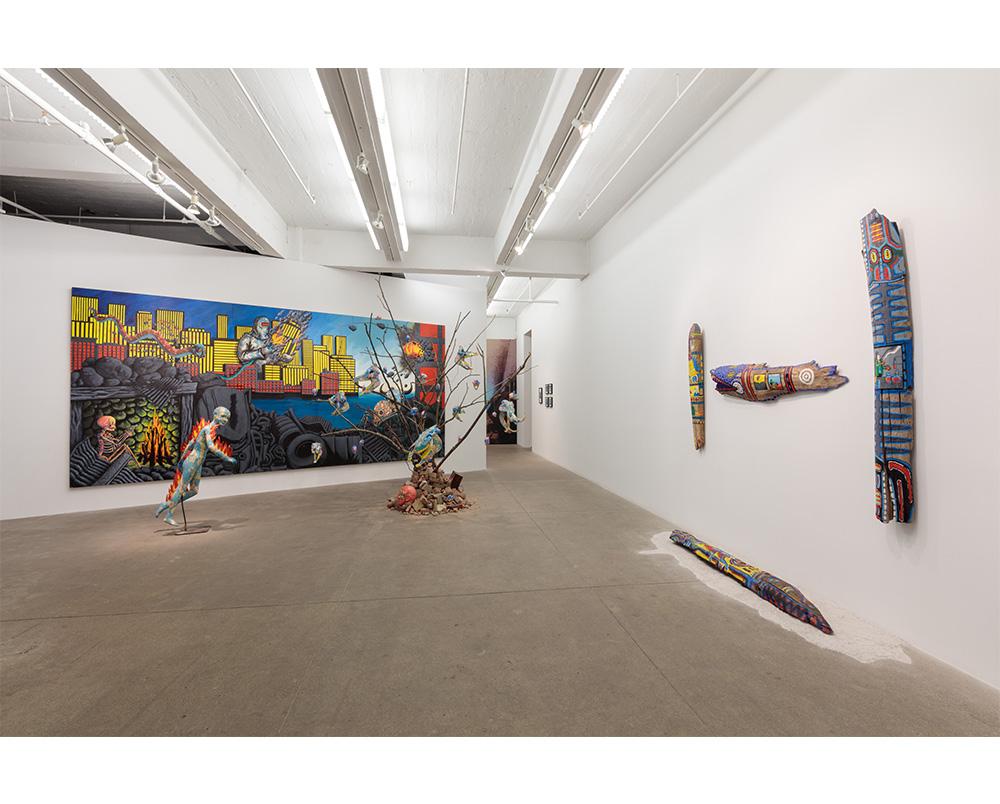 If you want to kill two birds with one stone and escape the heat while seeing one of our favorite exhibitions this summer, look no further. P.P.O.W. Gallery in Chelsea are exhibiting some of the works of an extremely important and wonderfully talented artist, David Wojnarowicz, from now until August 24th. We should also note that the Whitney Museum of American Art is concurrently David Wojnarowicz: History Keeps Me Awake at Night now through September 30, 2018.

Here are four seasons you should check out David Wojnarowicz Soon All This Will Be Picturesque Ruins at P.P.O.W. Gallery.

1. The variety of the artwork displayed gives something for everyone. Whether you’re a stickler for a finely crafted, technically masterful painting, or sculptor who favors the strange, P.P.O.W.’s exhibit has something for all fans of art. There are two video installations, large and small scale photography, paintings, a triptych, a few pieces of what appear to be carved driftwood that were painting in a pseudo-tribal style, a room dedicated to an installation that takes more than a few words to sum up, and even a tree adorned with a plethora of animal skulls and string lights. Each piece entirely unique and invigorating, without overshadowing the one next to it.

The confrontation with the AIDS crisis

2. In the 1980’s, when the AIDS epidemic was running rampant and people who contracted HIV and AIDS were seen as sodomites, scum, worthless, and sinners, David Wojnarowicz chose to be a voice for those who the American healthcare system had turned a blind eye to. Minority families were being told by religious leaders that using condoms and sexual protection was sinful, and that God would lead them away from temptation and contracting HIV. Wojnarowicz worked to spread the correct information and awareness about AIDS. He didn’t want it to be a dirty word, rather a known disease that should be treated with respect and dignity.

3. The technical aspects of the artwork were, and still are, phenomenal. Wojnarowicz combined several forms, styles and mediums to create his works. His “Queer” head installation, which utilizes television screens with looped videos, an audio recording, tree branches and other things like leaves and sticks, newspaper print, cinder blocks, action figures, and other elements are simply innovative and enthralling. The exhibit also features a large painting depicting a city in the midst of turmoil, and while the subject of the painting is chocked full of important meaning and symbolism, the style and technique with which it was painted is of a superior level. Strong, confident brushstrokes, with clean organized lines, meticulously laid out on a massive canvas. His use of maps with his work displays a tremendous amount of creativity. All of the animal skulls on his tree of skulls are plastered with parts of maps of the world, as well as his figure of a child on fire, which appears to be entirely made of the surface of a globe.

4. Along with the AIDS politics, Wojnarowicz takes on the juggernaut of the American government. At a time when Ronald Reagan might as well have flat out refused to even say the word AIDS, David Wojnarowicz was shouting it out to the world. He saw the hypocrisy and the destructive nature of the government, so he chose to fight it and make people aware of the crisis through his art. Republicans at the time were much more religiously affiliated, and they used the power they had in the government to push their Christian right agendas. If the government mandates how our healthcare system should be regulated, but then makes it damn near impossible for anyone afflicted with HIV to get access to that system, then isn’t it about time to demand a change from said government? Well that’s exactly what Wojnarowicz was trying to accomplish. This is such an important aspect of the exhibit, and it is a true highlight of the courage that it takes for an artist to stand up to the powers-that-be.

The David Wojnarowicz exhibit Soon This Will All Be Picturesque Ruins is up until August 24th, over at P.P.O.W. Gallery in Chelsea.  535 W 22nd St, New York, NY.

5 Art Events to Check Out in the Hamptons This Weekend

Ask the Collector with Holly Hager Collecting 101—Art and Value