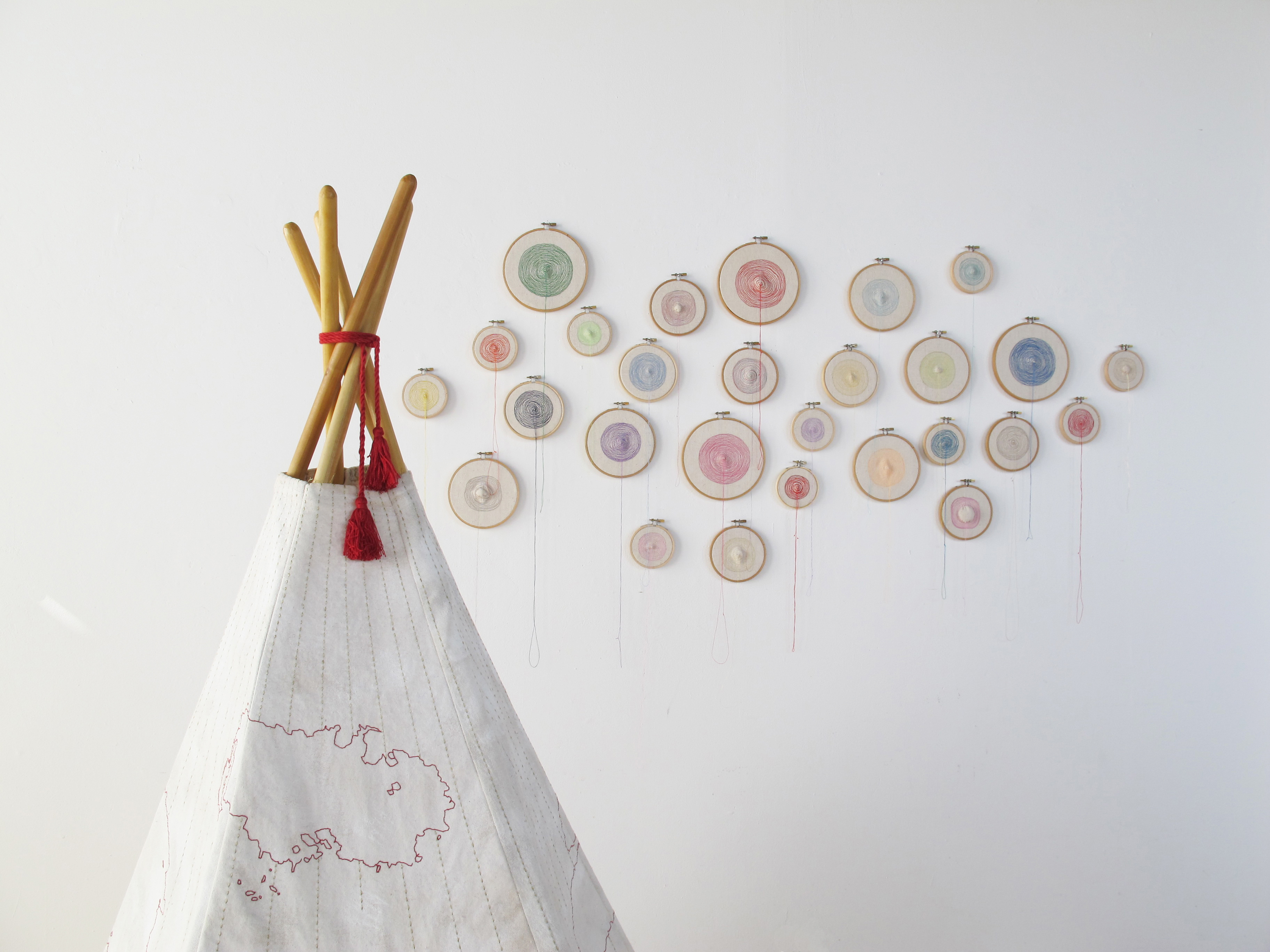 How do generations of Japanese artists respond to rapid changes brought on by nuclear forces? This weekend through Sept. 11, Japanese expatriate artist Tomoko Sugimoto showcases work, expanding on her use of Western craft and Japanese painting tradition. In a  serene room of embroidery, Sugimoto transforms the bodily aspect of postwar Japanese Fluxus group, into an energizing experience you’re invited to step into.

The end of imperial Japan was brought by the dropping of two nuclear bombs on Hiroshima and Nagasaki on Aug. 6 and 9, 1945, respectively. At the end of the second World War, the two Japanese cities of Hiroshima and Nagasaki experienced the devastation of two nuclear weapons. Within the body of art that emerged out of the ashes of the war, artists with a knowledge of European modernism (Japan opened up to the West in the 1870s) grappled with a fractured national identity. Chief Curator at M+ Hong Kong, Doruyn Chong (former Associate Curator of Painting and Sculpture at MoMA) told ARTnews, “The emperor himself was stripped of his status as a deity… Tokyo and much of the rest of Japan were going through a rapid reconstruction as the country was on its way to becoming an economic world leader.” Many artists, in groups such as Gutai and Fluxus, sought experimentation in performance and spiritualism to come to terms with a newly enforced democracy.

Japan’s earthquake, tsunami, and nuclear meltdown took place just one day before Sugimoto’s first solo show in the US “Whirl and Swallow” on March 12, 2011. In The New Yorker two years after that show, the artist recalled “At first, I was so depressed. We already knew what was happening and could see these crazy scenes, and the numbers of dead kept rising… But so many people came.” In the wake of the Fukushima Daiichi Nuclear Disaster, people embraced the serene, joyous quality in her embroidered works.

This weekend and in past shows, the artist utilizes the European and American craft tradition of embroidery, but in a wholly Japanese way through the use of rough industrial canvas, referencing organic textiles, and flattened figures. Until now, Sugimoto’s practice has predominantly been on the increasing experience of hybrid cultural identity. She grew up in Tokyo but came to New York in 1996 to attend the School of Visual Arts, before becoming the creative director of Takashi Murakami’s New York studio.

On the wall of the Lower East Side space, 108 round canvas are embroidered with jewel tones and an inviting six-foot-tall tent stands next to them. On a larger circle, cartoon-ish blonde children in Superflat style (Murakami coined this) are shown crawling up reeds.

A departure in mood lies in the clouds embroidered on the central tent, titled “The Unseen World.” In the show’s press release, Sugimoto clarifies these are nuclear clouds. Neutralizing the threatening quality of the clouds alludes to the reductionist quality of the westernized news cycle—an event can be deemed un-newsworthy within a week—or feeling abruptly separated from the Japan she knew as a child.

Crawl inside the tent and the consequence of the sewing machine becomes apparent. Red thread dangles down, brushing your shoulders and legs when you sit in the ‘mindset’ of internalizing the after effects of multiple catastrophic nuclear events of the last century. Inviting the viewer to sit and wear her experience chimes with Fluxus artist Tanaka Atsuko sculpture “Electric Dress” (1956). Atsuko is being buried inside electric painted bulbs, signifying the modern and industrialized Tokyo.

Stepping outside the tent the 108 embroidered frames of color placed at different heights create a stabilizing, humming energy. The sewing of cloth across the show stitches together Japanese cultural identities cleaved by nuclear disasters. The Unseen World’s curator Zahra Sherzad adds, “The unbroken fluidity in Sugimoto’s stitching envelops one in a serene experience.”

On Sugimoto’s work as his longtime studio director, Murakami said “when she was younger, she seemed even to be working with an air of desperation, like a monk in training. And then one day, that training seemed to reach its fruition… She has reached nirvana.” In her own work Sugimoto is weaving together cultural and tactile threads, pointing to not only a reinvigoration of craft but also a fuller arena of contemporary Japanese art.