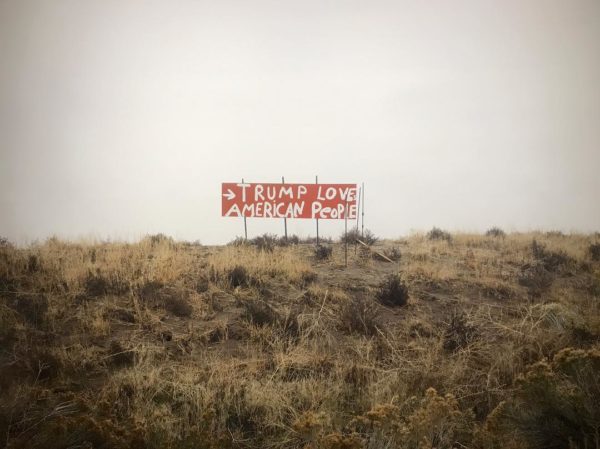 All of this goes to show that how you use social media matters. With this weekly installment of #InstagramThis, use your social media powers for good by celebrating the works of these artists and sharing their messages with your friends, family, and followers! After all, with great power comes great responsibility.

This monumental exhibition features a total of 99 American artists, all of whom use items from 99 cent stores to create art that sheds light on the 2013 bankruptcy of Detroit, once a thriving and diverse city, and critiques the current economic state.

During a time when the media is doubted and called “fake,” this exhibition explores the way we interact with The New York Times, one of the most widely read papers in the world. Each of the 80+ artworks involves the paper in some form or another, resulting in interesting interpretations.

3. Richard Misrach: Writing on the Wall

For decades, LA-born photographer Richard Misrach has been working on a massive, multifaceted project called Desert Cantos. Writing on the Wall is a new chapter of this project, in which he directly responds to the hostility felt across the country after the 2016 US presidential election. Half of all proceeds from this exhibition will go towards Human Rights Watch.

4. Beyond the Ban: Contemporary Iranian Art

In response to President Trump’s travel ban, Susan Eley Fine Art is celebrating the contributions of immigrants by presenting a group exhibition featuring Iranian artists who are based in the U.S. Proceeds will go towards the Center for Human Rights in Iran!

In this group exhibition, female artists shed light on the issues that women face in today’s political environment, from the protests at Standing Rock to healthcare. Some artists are even donating their profits to charities, like Kathrine Lamke Waste, who will give all proceeds to Planned Parenthood.

This exhibition includes two participatory works, Fake ID, in which the artist deconstructs participants’ identification cards to create a new one, and Alternative Facts, in which he notarizes false documents containing lies and wild stories into “truthful” public documents. Catch him at the New Museum on Thursdays from 7 to 9 pm!

13 Latino artists created site-specific works of art that address themes of borders, migration, and the relationship between identity and geographic location. Gabriel Dawe’s rainbow installation uses 65 miles of thread, while Justin Favela’s “Fridalandia” emerges you in a world where everything is a piñata. Collectively, these artworks form an exhibition that feels especially relevant and poignant considering the current political climate.

Ai Weiwei is famous in the art world, and infamous in other circles. After being detained by the Chinese government for 81 days, he used more than 1.2 million LEGO blocks to create portraits of 176 other human rights activists who have faced trouble with their governments and have been detained, exiled, or have sought political asylum. The wallpaper installation that spans 700 feet also depicts symbols of surveillance and control upon close inspection.

Public Art Fund is bringing Ai Weiwei to New York City for an exhibition addressing immigration, migration, and boundaries. He will install fences around the city in ways that serve as welcoming gateways rather than as divisive barriers.