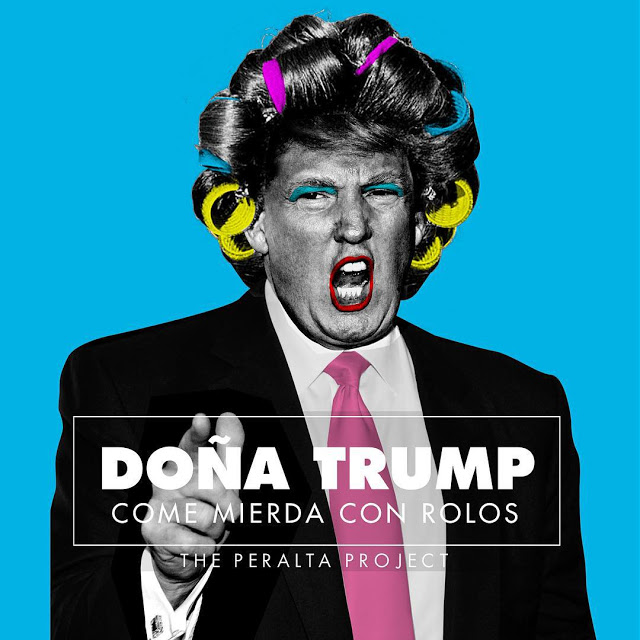 During this cut-throat election, our political rivals have taken their artistry to new heights. Anti-Trump and anti-Hilary zealots have placed their opinions and political statements on the canvas.  Anti-Trump fans have rallied their troops to deface Trump any chance they get; on Twitter, Facebook, Instagram and even on the streets, you can catch anti-Trump art. From Trump trolls to Doña Trump, to baby Trump that made a mess in his diaper, anti-Trump supporters have defaced Donald Trump in some of the most creative ways. This will go down in the history books folks, so brace yourself and your bladders for our 7 favorite anti-Trump artworks.

Trump has referred to women he doesn’t like as ‘fat pigs’, ‘dogs’, ‘slobs’ and don’t forget ‘disgusting animals.’ He’s just the sweetest guy, isn’t he? He publicly hates Rosie O’Donnell, but word to the wise: sometimes what you hate defines you. Maybe it’s time to give in to Rosie because by the looks of this piece, their lost in the flames of love.

He’s the doll every toddler wants to stick in the toilet, poor Cabbage Patch Kid. In this picture, this stumpy looking Donald wipes his little bum with the Declaration of Independence. Not far from the truth, Trump wants to “make America great again”, but that must be difficult to do that with your pants around your ankles. Oh, the struggle of a billionaire business man running for president, it must be a rough life.

Illma Gore, we congratulate you for your masterpiece and we apologize for the backlash you got in return. This artist drew a photo of an exposed Trump posing like a model and featured the ‘tiny Trump’ as well. “Paint me like one of your French girls” he said, and Gore gladly accepted his request. Only kidding, but this artist went viral in February for this picture and thankfully Gore is making some cash money. This piece of art is now worth over $1.4 million.

Trolls are known for being hideous little creatures with violent tendencies so it’s no surprise that street artists have taken the liberty of creating Trump Trolls. But be careful not to feed them because like ducks they come back, and they bring friends. Street artists are warning you so don’t avoid the signs… or the trolls.

Now, we all know Trump doesn’t have that much hair but come to think to it, he would probably make a better hairdresser than a President. Tony Peralta, New York native, created Doña Trump, and we have to say this is his best alter-ego yet. Maybe when his curlers are done, Doña will be ready to go out there and run a country, hopefully not.

When Trump delivers a speech, its hard to tell whether you’re listening to an adult or a 5th grader practicing their fluency. He yells, and whines like a baby so why not see him for what he is, a whiney baby that made quite a big mess. Lord knows who’s going to clean that up.

Love is love. We know it when we see it and this ladies and gentlemen is the couple of the year. With a love so strong, no wall could come between them. They have gone through public slander, plagiarized speeches, and toupées, but they’ve managed to outlast us all. Trump believes in love, can’t you tell?

Getting Bedazzled & Glossy with Ashley Longshore