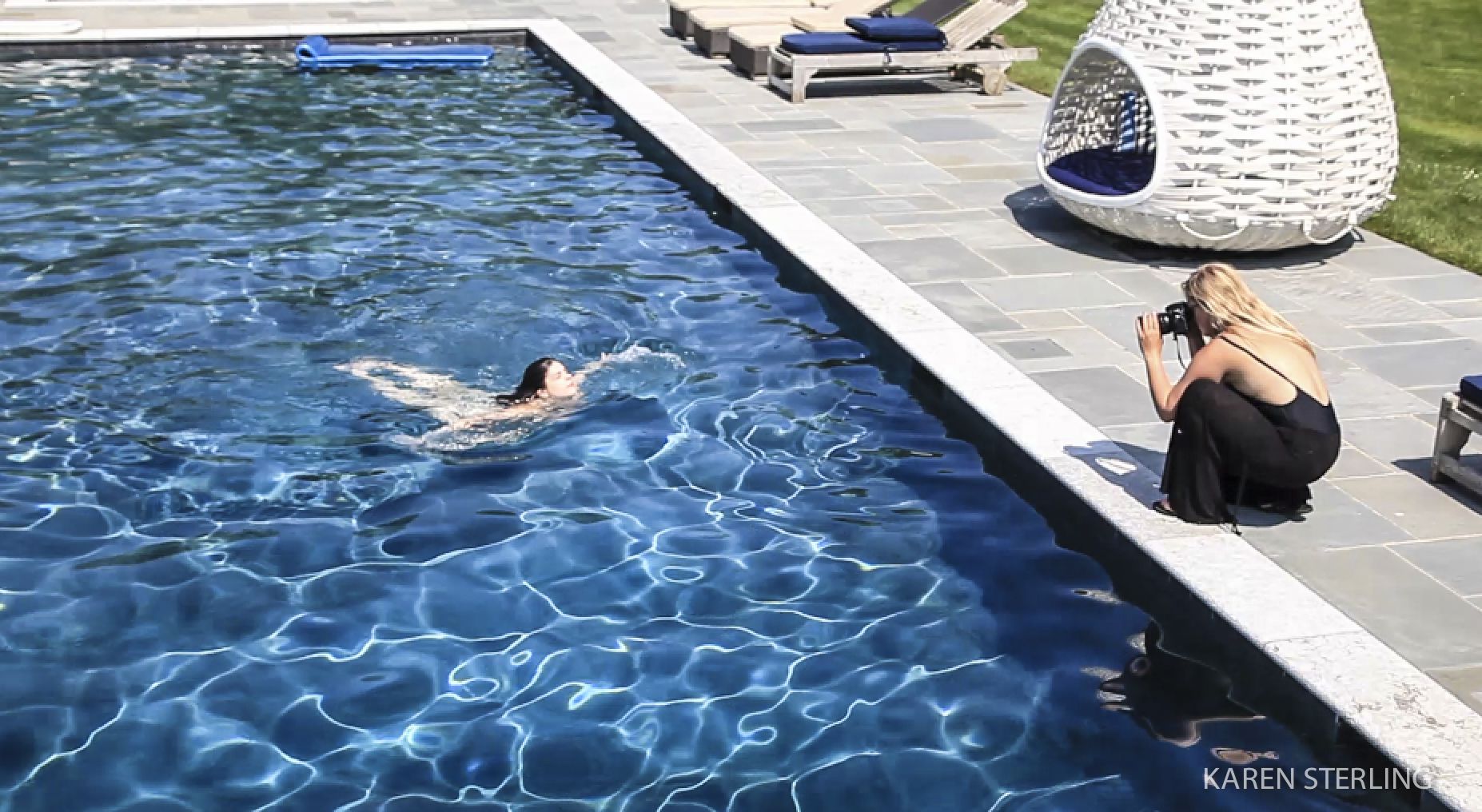 On a sunny and temperate day, I joined artist Reisha Perlmutter and the team from Roman Fine Art at an estate in the Hamptons. Posted up near the expansive and crystalline swimming pool, the artist and behind-the-scenes photographer situated themselves, setting up ladders, checking depth and light, watching and mapping sunbeams dance across the bottom of the blue basin. Fresh off the Jitney from New York City, the serenity and personal space available in the Hamptons was invigorating. Sweetly overwhelmed with clarity and the crisp blues and greens of the surrounding landscape, the group was preparing for the task at hand: producing photo studies for Perlmutter’s latest series.

Perlmutter has made a name for herself internationally as a young, talented artist with an affinity for painting women, unclothed and uninhibited, submerged in opalescent water. With an Instagram following of 156K and growing, it’s easy to see why her work has garnered such intensely popular acclaim. Perlmutter, a figurative artist with roots in abstraction and an eye for provocative magnification, has been painting women in water for just over two years. While she doesn’t consider herself a photographer, by keeping her process open from start to finish and allowing for abstraction and deviation in her methods from photographing to painting. Her photographs are as critical to her process as painting, relying on the nature of the moment and capturing what she captures to create honest, sincere depictions of women.

Invited to both observe and participate in a photo shoot to produce studies for Perlmutter’s upcoming series, Immerse, I was deeply curious to observe her process. Already familiar with her paintings, I only knew a couple of things about our agenda for the day: one – that I would be naked; two – that I would be photographed. Perlmutter’s work is concerned with the human body and its biological connection to water. Self-referential and exploratory at its core, Perlmutter’s work investigates women’s relationships with their bodies. Water, a soothing, blanketing element, plays a crucial role in her works not only as a staple of her life growing up in Florida, but also as a level playing field of weightlessness.

No men are permitted to directly observe her shoots – an effort to eliminate awkwardness, sexual undertones and other compromising factors from the experience. Removing clothing and stigma (and the male gaze) also reduces shame and fear, allowing the models to be free and unconcerned with their surroundings. Perlmutter tends to stray away from using professional models in favor of diverse women representing a broad spectrum of body types, from tattooed, pierced, scarred, large, small, hairy and smooth. The women she paints are real, beautified by the buoyancy and joy experienced in nakedness and freedom, but it takes a while for some of her models to come around. “I hear from so many of the women that I photograph ‘I’m really uncomfortable and I’m not sure I want to do this…’ The second we’re engaging and moving and being in the water it breaks down all these inhibitions that we have as women, which is really powerful. It becomes experiential more than it just being about me photographing.”

The photo shoot began as I plunged into the water, removing my swimsuit. As I floated in the pool under the impossibly blue sky while Perlmutter worked, I first fought the itching notion to pose, find my most photographable angles – how do I make myself look skinny? But when a body is suspended in space, 360 degrees of movement accessible without gravity pulling it down, no thigh jiggle from feet connecting with the earth, finding a “best angle” falls very, very low on one’s priority list.

Caressed in the water like a calm, cool womb I floated, dove, practiced the breaststroke and tried to touch the bottom. I was carefree, swimming, acting silly, breaching through the water like when I was a child and pretended to be a dolphin. I stayed underwater as long as I could and held my breath until forced to think again, my body engulfed in a pulsating, makeshift embryonic sac. This is what it must have felt like to exist without consciousness.

As one in a roster of several women of different age groups, it was enlightening to listen in on the other model’s experiences, the transformation of their initial fear and hesitancy to comfortability and liberation. At several moments over the course of the day, we found ourselves waxing lyrical over bodies, aging, emotions, and the female experience in general. One of Perlmutter’s most passionate subjects is aging and culture, stating “It’s this thing where we just need to sort of embrace this idea of our bodies changing and morphing and evolving with age; we’re biological beings that change. I think it’s fair to say that American culture just doesn’t embrace that.” Which is true – part of the reason why Perlmutter strives to depict all different types of women. The difficulty lies in finding women willing and trusting enough to bare themselves in such an intimate environment.

Despite my personal lack of fear disrobing, I still struggle with my own fair share of body image issues and self-inflicted fat shaming, poisonous thoughts that I kill and resurrect nonsensically over and over again, burying under learned confidence and ambition. All of those thoughts and feelings washed away, from me and the other models, from anyone who’s experienced doubt in their bodies. That’s the beauty in the work, according to Perlmutter – “Your body changes no matter what and it’s an amazing thing that we have cells that change and develop… it’s part of this beautiful life cycle and what a beautiful thing that you get to go through that life cycle.”

Perlmutter is as non-invasive as it gets when it comes to photographing her subjects. She observes and captures movements, angles, light on bodies and dark hair wrapping around faces and necks; waiting and watching and snapping away on her life-proofed lens. She swims with her models, letting them guide her and encouraging them to let go. A meditational practice for all parties involved, Perlmutter communicates her role as observer clearly through her paintings. She creates a one-way mirror – a window for the viewer, reflective for the swimmer.

For viewers, Perlmutter’s paintings make it easy to imagine water lapping against the face of the model as she surfaces for air, squints and squeezes water from her eyelashes while suspended in aqua ether. As visceral as they are impressionistic, the works present an accurate depiction of the sensations Perlmutter’s swimmers experience. Her final paintings are as participatory as her studies, innocently voyeuristic and immersive depictions of what it means to just be.

Roman Fine Art is hosting Perlmutter’s first solo exhibition, titled Immerse. The show will include over 15 new paintings from her water series, exploring the body, its relationship to water and the science of color.