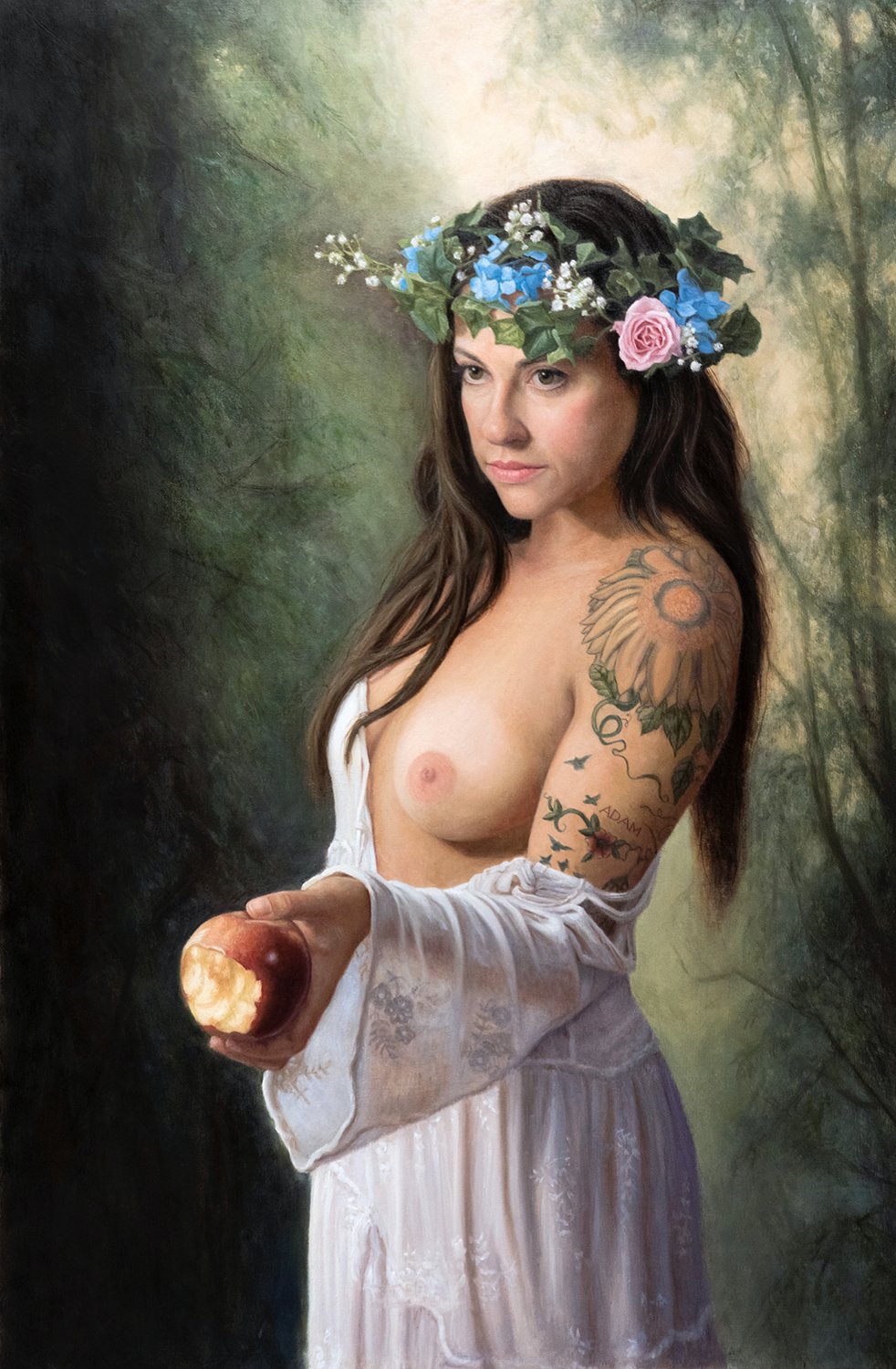 Nanci France-Vaz is an Allegorical Realist and uses symbolism to create visual stories on canvas. France-Vaz draws inspiration from the Pre-Raphaelite and Naturalist periods of art, poetry, and classic literature. She combines her strong foundation in life painting with imaginative backgrounds fusing classical with contemporary realism.

Since my youth, I have had a fascination and passion for the Greek and Roman mythological tales, the Arthurian legends, poetry, and the visual storytelling of past masters. In elementary and junior high school, I wrote short stories for my English class that were created from 20 spelling words on our tests. They always had a magical and mythological outcome.  When I was in School of Visual Arts to earn my BFA, I took many literature and drama classes. I was amazed and angered by the way these stories, written primarily by men centuries ago, perceived women in their society.

The History and Pre-Raphaelite paintings depicted women as being overcome by the male figures of lust, portrayed prostitutes or as the “other” woman that lusted after another’s husband or love, and the model displayed for the male gaze of the young female goddess and Arthurian heroines. The role of women in art has changed over the centuries from visual stories of goddess, lover, prostitute, sorceress, wife, mother, and heroine.

The feminist theories of the female figure had often a redemptive perspective. How should women look, behave, and what lesson is to be learned as a result of their wrong decisions? Many women were and still are expected to “keep her story” from being heard or there is a judgment from society. In ethical feminism beliefs today, it is the intelligibility and coherence of ”her story”. The idea is not based on what women “are,” but on the remembrance of the “not yet” which is recollected in both allegory and myth.

The myths and legends often used allegory and symbolism to send a word of caution to those that are making wrong decisions by using the fate of the mythological characters as examples. With their help, lessons could be learned and we could avoid a similar fate ourselves. The experience from the goddess or heroine’s left us with emotion and compassion, but sometimes anger with the way past societies portrayed these female figures as they were taught a lesson because of improper behavior.

My love for literature, poetry, and film has brought me to a fascinating time in the 21st century. Why can’t we tell those stories that have been around for centuries and put a new twist on the outcome of the female figure as goddess, lover, or Arthurian heroine?

In my new series, Femme Fatale, my desire is to portray the contemporary goddess image as iconographic of the self-empowerment of modern women. The goddess recognizes the need to find the divine within and to celebrate the magic and power of women. There is a spiritual connection to everyday life and a celebration of the life cycle of the female. The Pre-Raphaelite heroines are portrayed as strong woman that do not apologize for passion, lust, appearances, or any life decision they have made. My intention is to empower women via the allegorical and mythological by a message of hope not error. My femme fatales make no excuse for their emotions, passion, lust, and appearance! They are strong but soft, and still maintain their “being” a woman.

Out of Eden, in this visual story, my femme fatale figure is Eve. She has survived for centuries and now resurfaces in the 21st century holding bitten apple, offering to the male viewer. In one of the tales from Genesis, God punishes Adam and Eve for eating the forbidden fruit from the Garden of Eden. He casts them out of Eden to be shamed. He also avenges that Eve with very painful child bearing and as well as all women because of her sin. In my concept of Eve, she never should have been cast from Eden, as she was innocent. The background is done softly and with colors and lighting indicating a possible 19th century painting to convey the past. She is very much in the foreground and the apple jumps out at you. Her dress is dropped as she has no shame, and is tattooed with Adams name and the sunflower. The symbolism of the sunflower is an integral part of the painting as it represents enlighten, fertility, faithfulness, and warmth. Adam is stamped on her arm as to show her eternal love for him. Her headdress has a pink rose that represents female in a sensual position for the viewer, blue, (male) and hydrangea petals surrounding it with white baby breath, which stands for purity. The apple is bitten not once but several times and in line with her womb. It symbolizes her aged womb from childbearing.

The Offering, is about juxtapositions. There is the light against dark, the soft against the hard, the spiritual against the mystical. The model has purple hair with a full sleeve tattoo. Society has an opinion about what women “should” look like. I have heard people around me state that women with tattoos are wild and tramps. It doesn’t look ladylike and especially if she is a mother. My model is a single mom, but she is the most spiritual lady I have ever met. Her face is angelic and she is wearing white to symbolize softness, which contrasts the hardness of the hair and arm. The fireflies keep her in their circle of light protecting her and the fairy above gives her light energy against the left dark side. The model was going through a divorce and is raising two children, but she chooses the light. Her hands can be in prayer, or is it Namaste?

The tales in figurative paintings do not belong to the past, but have survived because their narratives. They are still valid in contemporary contexts and relate to situations and experiences in our times. The stories of myth and legend empower the female figure today because of the symbolism, which shapes origins of contemporary visual storytelling. It sets a tone for new meanings and representation of the female figure in an abstract modern popular culture worldwide.

Love’s Kaleidoscope deals with the aftermath of a lost love that comes back from the past into the future. Many of us have experienced this emotion of being trapped in a circle or triangle when it comes to love. I thought of Guinevere that fell in love with Lancelot, while she was married to King Arthur. Arthur finds them embracing and throws her in prison and banishes Lancelot from Camelot. My contemporary version of Lady Guinevere puts her between the past of her love for Lancelot, and trapped in her present. The patterns of love and life infiltrate her skin as a symbol of someone getting under your skin and into your heart. She can’t escape Love’s kaleidoscope. The background is decorative as in the pre-Raphaelite paintings, but flat and contemporary. The colors blue and pink are representational of the male and female love.

Hope is symbolized in the painting Balancing between Two worlds. Since the fast turning pace of the world, I sometimes feel like I am on a hamster wheel. Life is a juggling act of multi tasking and prioritizing. We become overwhelmed and things aren’t what they appear or familiar. Its abstract and fragmented by colorful pieces of experiences, lessons, and tragedies. The mudra in this piece is balance. My choice of materials are oil, copper, gold, and colored leaf on panel. The background is decorative but expressionist abstraction. It is a wish and desire to stay positive and calm through all the colorful chaos around us.  The background patterns of life are weaved into her skin as she is part of her world. There is no separation. Who is she? Is she a pre-raphaelite sister or a goddess? I leave it for the viewer to decide. The concept is about hope and light.

For the past few years, my voice is starting to come about, taking new strides and chances with my inner emotions. I believe I have been on the side of feminism, and especially love the period after the Women’s suffrage movement coming out of the 19th century, into the turn of the 20th century. The women of the 20’s were rebels and dared to defy society with there short dresses, red lips, and cigarette smoking. Women’s right to vote came about. The changing of past myths and Arthurian legend has been a desire of mine for a few years. Hamilton, the play comes to mind in which the director changes the characters race and music while maintaining the classical story. Screenwriters of old classic films have done the same. Great Expectations is one example of a total rewrite of the original story. Queen Elizabeth is another that was re written,, but not too far off the story as the writers are dealing with history, but can make the story more modern to keep the attention of the viewers.

West Wind and the Wildflower is a work in progress that I started mid October. In the greek/roman mythological story of Khloris/Flora, the goddess of flowers/the flower nymph. She is raped by Zephyr, the god of the west wind. He marries her and she is quite happy with him. There were many paintings depicting Flora with Zephyr around the Renaissance period through the 16th century. In my contemporary version, she is not raped but waiting for the West Wind god of her own free will. The flower nymph’s expression is one of awaiting her lover and her body language tells us she is ready to be swept away by him. I thought it fitting to make Flora a woman that knows what she wants and the one she loves. There is nothing to hide. She is awaiting her lover with openness. The lesson or moral here is to be authentic and true to your desires. Be who you are, a woman without a redemptive moral.

Myth is timeless and can transform contemporary society by opening our lives to curiosity, the enigma of the unordinary, the chaos, and beautiful universe that belongs to all cultures. It can transform us into the creation, hearing, and passing on of the classical stories to modern days. We, as creative’s, have the power of the narrative, creating new ideas, understanding the human condition, and most of all…. the power of love.

To see more of Nanci France-Vaz’s work go to www.nancifrancevaz.com