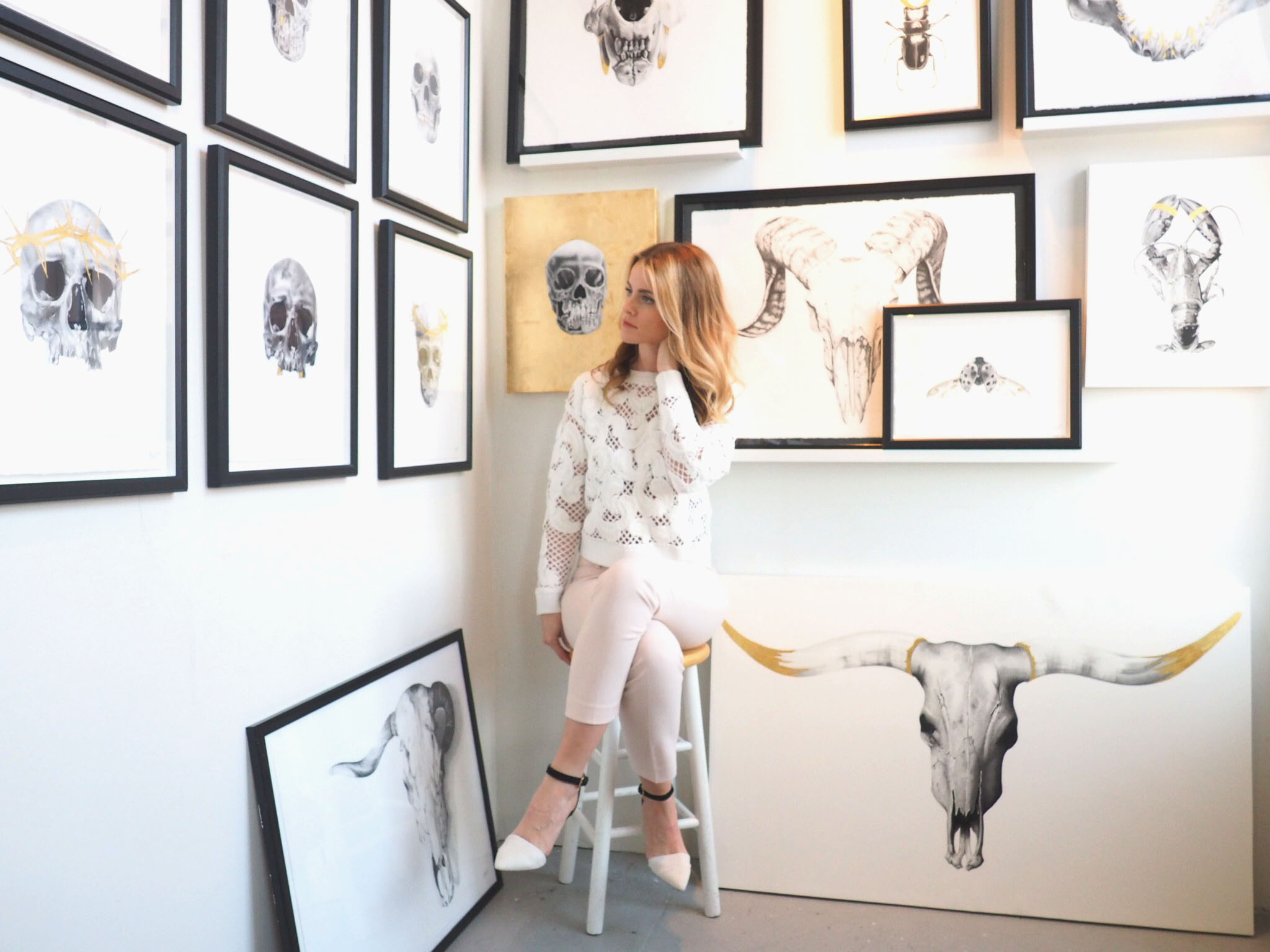 We have to admit, when we saw Elizabeth Waggett at an opening at Joseph Gross Gallery, we immediately had a major girl crush. She’s a stylish Brit who is not only very kind, but talented and her work immediately caught our eye. During our conversation she mentioned she had been asked to participate in the Prince’s Trust, is the United Kingdom-based charity ran by HRH Prince Charles, Harry and William. Now in its 40th year, the Trust will be holding the ‘Eaton Ball’ to mark the occasion and Elizabeth’s work will be auctioned off.  We had to get the scoop on that, along with her favorite cocktail and more.

AZ: Tell us about your first show in Abu Dhabi.
EW: At the time, I lived in Abu Dhabi, and this was a huge turning point for me creatively. Manchester itself is a very creative and unique city, but there is an abundance of different cultures, incredible wealth and driven people in Abu Dhabi. Being around all of this – and thriving in that environment — gave me the confidence to put my work in front of a new audience; and it was well received. Within a few weeks of that first group show, the gallery asked if I would do a solo show, and it all came from there.

AZ: What is your creative process?
EW: I spend ages visualizing. For me working from a group of photographs is the best way and selecting them is my starting point. If my photographs are right then, the piece will be. I would probably class composition as my greatest strength, so I just go straight in and don’t sketch things out or fill a sketchbook first.

Once I’m happy with the initial outlines, which I often redo numerous times (maybe I should use a sketch book) the building and layering begins. I have to have things fairly peaceful, and I must be alone. My work is too precise to lose focus, so I have to stay in the zone.

AZ: Favorite museum?
EW: The Museum of Natural History right now, I use my membership for inspiration often, and it was a huge influence in my most recent solo show and series of work.

AZ: Tell us about your upcoming inspiration trip.
EW: I’m heading south. I’ve never been, and I can’t wait to experience the rich cultures America has to offer. NYC is great, but it can be an insular little bubble at times. Also, I’m told that this it’s nothing like the rest of America, so I’m going to soak it all in, as well as hopefully capture some great photographs to bring back and work from. I love to let what’s around me, socially that is, be present in my work. I like observing points of view and cultural nuance, which play a huge role in my work. I’m also doing a little series while I’m on the road which I will document on my social media.

AZ: Your work has been selected for the Prince’s Trust, how did that happen?
EW: A collector of my work showed the ‘head’ of the trust my work, and they contacted me directly! I’m a huge fan of the socially responsible work they do and it’s a huge honour having the opportunity to contribute in my own way.

AZ: What was your reaction?
EW: I’ve had so many great things happen recently I didn’t quite believe it; like it might get taken away from me, and then I started to panic, the pressure of the piece being perfect with a tight deadline!

AZ: We love the way you use a lot of gold in your work, why gold?
EW: The gold visually represents the dichotomy of the piece, in that it’s contrasted totally with the monochromatic drawing. The gold serves to offer a commentary on the arbitrary value we place on those things that have true, intrinsic value. For instance, the claw of a lobster is his most valuable asset but also the most expensive item at a restaurant. The stark contrast between the gold and the monochromatic drawing really draws attention to that meaning.

AZ: Would you consider your work political in a way?
EW: For myself, no, but it depends on who’s looking at it. I don’t intentionally take a political stance with my pieces, but I have been told by some collectors that they do. My work offers more of a social commentary, what I see in humanities everyday struggle with itself. However, it’s up to the viewer to see this how they want to. And some see it as politically motivated.

AZ: Who has influenced the most?
EW: So many, however, who always comes to mind is Christopher Wool, the monochromatic pallet, contrast and the boldness of his work makes my heart beat faster. Also, a university professor who taught me to look at the world in a new way, with an inquiring mind rather than a programmed one.

AZ: What do you have coming up?
EW: I have a show and sponsorship with a new artisan, tech-brand called Oree. It’s not something I’ve ever done before but their products and ethos are truly aligned with my own, and I’m excited to be a part of the launch. From that, I’ll begin working on a set of smaller works, which will be exhibited globally. Some of my recent pieces from the ‘Face Value’ series are also set to tour this summer.

Photographing Protests Through a Prism