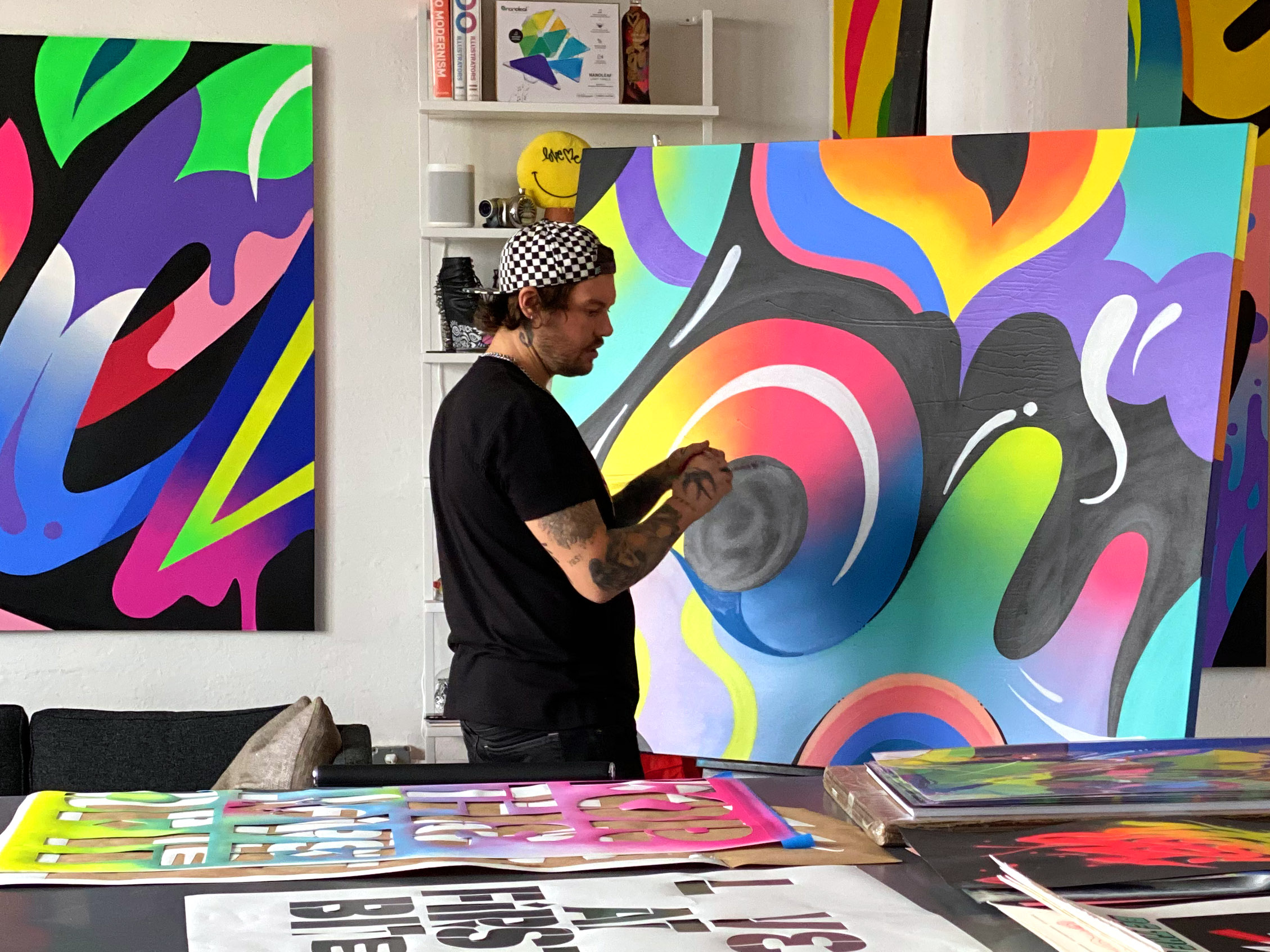 Jason Naylor at work in his studio.

Poetry was never a luxury—the creative impulse is more demand than request. Brooklyn-based artist, designer, and creative director Jason Naylor has constructed monuments most spend their careers chasing—murals at international festivals, brand partnerships that mass-produce his message, even a permanent billboard in Times Square. These achievements haven’t sprung from the ether by fate. They are the results of a painstaking, piecemeal creation on the artist’s part, an ongoing process which recently manifested Naylor’s first solo show, ‘Reading Between the Lines’ at a pop up space in Williamsburg, Brooklyn.

Cobbling together eclectic fragments proves a motif throughout Naylor’s narrative. The artist grew up in Salt Lake City, not a particularly creative place at the time, but one which still offered workable material. There, he excelled in his high school art classes and enjoyed encouragement from his mother, an artist herself. “All circumstances considered, I had a fairly supportive upbringing in terms of my creative path,” Naylor told me over FaceTime.

“I think it’s a matter of drawing inspiration from anything around you,” he continued. “As long as there’s stimulation, then you’re fine. If you have an imagination and you’re not staring at a white wall all day, then I think you’re fine.”

Naylor studied graphic design at Brigham Young University and moved to New York City soon after to begin his career at MAC Cosmetics. When the artist’s surroundings shifted, his sensibilities followed suit. “Even though I don’t do this deliberately, if you look at my work, it’s very bright colored and black, and that looks like a MAC color palette,” Naylor noted.

This starting point propelled a whirlwind career that truly kicked off when the artist quit drinking in 2015, trading his maladaptive coping mechanisms for a toolkit borne of self-care. Naylor’s style hit its stride shortly after with a high-energy jubilee of contrast and saturation—bright colors, happy symbols, and affirmations all aiming to share his buoyant revelations about the beauty in all things. The impeccable execution of these dynamic designs makes their message irresistible, even to the most stringent cynic.

‘Reading Between The Lines’ pushed Naylor’s mission to spread positivity to more experimental measures. The show began as a casual conversation between the artist and Beckie Warren of GirlSeesArt, who organized this exhibition. The two were out to dinner, discussing art, at the end of 2019. Naylor had tried to dip his toes into the gallery scene but couldn’t find his niche within the group show landscape which seemed his natural starting point. He told Warren how the pieces refused to fit.

The duo put their heads together in problem-solving, envisioning what Naylor’s then-hypothetical solo show might look like. Warren pointed out that there are avenues beyond traditional gallery representation available to artists, suggesting he strike out on his own. Just as their partnership brought Naylor’s work to a new environment, it also empowered his creative practice to evolve, even in the face of uncertainty. Having Warren as a sounding board helped bolster Naylor’s confidence and clarify the new work’s intentions.

Consequently, the canvases presented throughout ‘Reading Between The Lines’ during its week-long run in March broke free from the literal confines of the artist’s previous work. “If you look at each painting, there’s a coded message to it,” he explained. “To me, this body of work was not about reading the word—it was about having the experience.” His desire to explore this concept stemmed from his fascination with language, a penchant which drew him to graphic design in the first place.

‘Reading Between The Lines’ deconstructed Naylor’s established practice, delineating the pieces to craft a subconscious study in cognition. “The first painting was still pretty literal,” Naylor said. “I just turned it into a triptych where it’s cut into three pieces.” Continuing through the exhibition, however, led viewers to contemplate isolated and abstracted bits of letters, gestures popping against black backgrounds. A palpable awareness about the visceral process of perception rushed to fill the space between the viewers’ eyeballs and Naylor’s artwork, mounted on white warehouse walls of well-worn brick and industrial wiring.

Naylor told me that since the pandemic, “We’ve been craving this connection, but we just can’t quite have it.” As viewers encountered the sensation of just barely catching words and letters in Naylor’s paintings, the work shed light on the process of building more effectively than words might have managed.

Just like the viewer can’t completely wrangle Naylor’s canvases into submission, the creative drive and those circumstances always influencing it are beyond the scope of human reach. Instead, as Naylor has found at almost every stage in his development, an individual can only alter their relationship to these external forces.

While the past year has proven a challenge on the collective scale, opportunities continually abound. Naylor has channeled the strife into big projects that still fit a quarantine state of mind—large-scale murals in Massachusetts and Connecticut, a stenciled street art campaign reminding New Yorkers to wash their hands and keep their heads up, and the publication of his first book, ‘Live Life Colorfully,’ which offers concrete tips to find inspiration in the otherwise mundane.

By the time it closed, ‘Read Between the Lines’ sold all but few pieces of its inventory, donated its largest canvas to a mental health nonprofit in Bucks County, PA, and hosted a book signing for fans who acquired Naylor’s literary endeavor. By working with the pieces within his reach, the artist generated beauty and activity where there had only once been blank space.

Poetry was never a luxury, but a reality always within reach. This truth propels Jason Naylor in his evangelism of spellbinding shades and seasoned finesse. The message stays the same, but its shape vacillates at whim. From street corners to soda cans, luxury handbags, and now the white-walled gallery space, for Naylor it’s all part of the process of exposing the poetry innate to every moment. All it takes is the love, time, and space required to read between the lines.