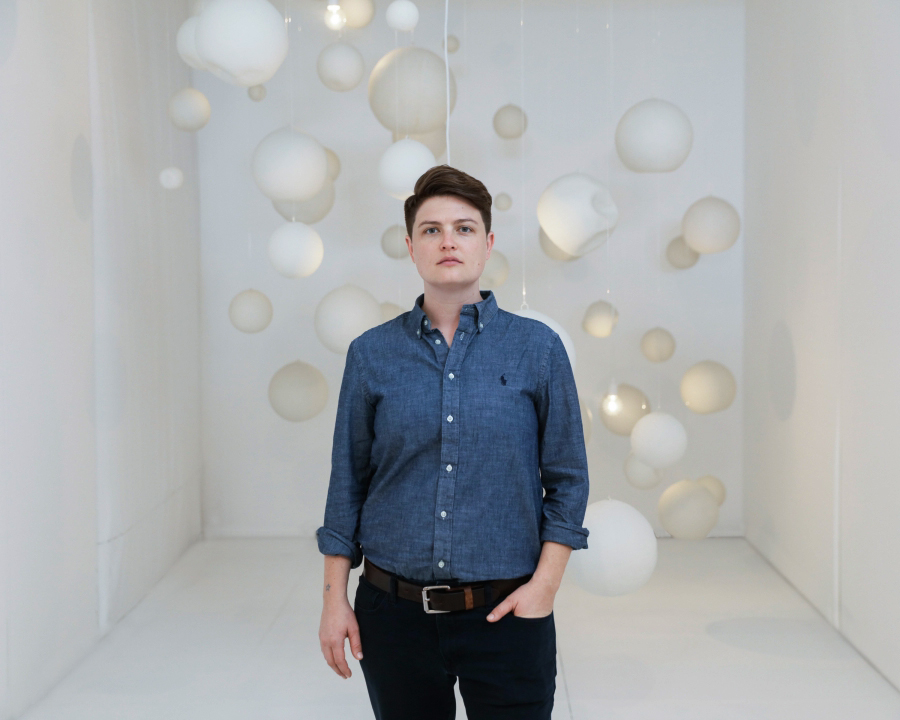 Last month, we introduced you to our monthly series, #ArtPowerWomen! As a recap, the goal of this series is to increase the visibility of important, unrepresented women artists. To do this, Art Zealous has teamed up in a pro bono collaboration with Curatious and GirlSeesArt.

For the month of March, we chose Brooklyn-based mixed media artist, Phoenix Lindsey-Hall . You might recognize her work from last year’s PULSE Miami Beach where she was exhibited Never Stop Dancing, which examined violence in queer communities through 49 porcelain disco balls, paying homage to the victims of the Pulse nightclub shooting that took place in Orlando in 2016.

We caught up with Lindsey-Hall to discuss her background, her days as an LGBTQ rights lobbyist, and what we can expect to see from her in the future.

To be considered for the series, post your work with #artpowerwomen.

PLH: This winter it has been my sofa. When it warms up in a few weeks, it will be the dog park.

PLH: Education is very important in my family. As an only child, I often did my elementary school homework alongside my parents who were working on their PhDs. They have been invaluable role models, showing me the of the importance of self-expression, critical thinking, and open inquiry.

Studying at Savannah College of Art and Design and Parsons New School for Design allowed me to take the time to develop my basis of theory, craft and dialog. I continue to be supported by the friends, colleagues and larger communities that I developed during those critical times in my artistic life.

AZ: Do you have a Professor or teacher who pushed you beyond your comfort zone?

PLH: I have had many Professors that have shaped my work and thinking, but the one that truly pushed me is a professor whose class I never even took.  During grad school, I was in a photography program, but I felt the work growing more sculptural. So I just hung around woodshop and metal shop, teaching myself and learning as I experimented with new techniques.

Don Porcaro, the BFA Director at the time and now Professor Emeritus, was so generous with his time, always stopping to give me a pointer or asking me why I was making the material choices I was. The way he seamlessly flowed between mediums, metal to wood to clay, continues to be an inspiration in the studio. He taught me to be guided by the process and to be generous with what I have learned along the way.

AZ: You lived in Kentucky before Grad school as an LGBTQ rights lobbyist, tell us about that experience. Has your experience seeped into any of your work?

PLH: After undergrad, I moved to Louisville, Kentucky where I was very involved with local and national queer rights organizing. It was the year that marriage equality was being voted on in several different states, and Kentucky was on the national stage as LBGTQ organizers and allies tried to galvanize local support. I cut my teeth going door-to-door, phone banking and lobbying elected officials.

Knocking on someone’s door on a Saturday morning and asking them what they think about queer rights in suburban Kentucky was a lesson in how to listen to different points of view, how to try to find common ground and how to stand up for what I believe. I know that those one-on-one conversations shifted people’s attitudes over time. Like the countless people that came before me, I am humbled that my work helped pave the way for the advances in equality we have seen in recent years. Those experiences helped build a strong foundation in my conviction to address difficult subjects in my artwork.

AZ: Your background is in photography, when did you first decide to try and different medium? Were you nervous?

PLH: I have a deep love for photography. It is a wonderful tool to explore, capture and analyze the human condition. However, when I started to explore the issue of queer hate crimes, I found that the specificity of photography was getting in the way. I wanted to have a dialog about the larger issue of hate crimes, but struggled with the tropes of the memorializing photograph of a victim versus the mug shot of a perpetrator. Those images were so loaded and distancing and moreover, didn’t speak to the interchangeability that I found in cases that I was studying. It just felt like a project that didn’t want to be photographic; it needed to be present, fragile and strong.

Clay has a quiet power. It is a material that is a part of our collective consciousness. It holds our coffee in the morning today just as it held food and water in ancient Mesopotamia. It holds up our roofs, decorates our homes and our bodies. There is a strength and fragility that are constantly pushing against each other. For these reasons, I fell in love with it as a medium that can express deeper contemporary themes. It has been wonderful to add this as a skill in my artist’s toolbox.

AZ: We were so moved by Never Stop Dancing, your body of work featuring 49 illuminated, porcelain disco balls—an homage to the victims of the Pulse nightclub shooting in Orlando in 2016. What has been the response to that piece?

PLH: My wife and I went straight to the Stonewall Inn when we heard news of the Pulse nightclub shooting. This is where queer New Yorkers go when they need community. By the front door, there was a growing pile of flowers on the sidewalk. Here, I found a small note accompanying a bouquet that simply said, “Never Stop Dancing.” Those words where the inspiration and ultimately the title to my work in memory of those who were lost. In this large-scale porcelain installation, I suspended 49 bone white disco balls, one for each of the victims. The individual disco balls were slip cast in several sizes, some taking up to ten gallons of porcelain slip to fill. Each piece was then suspended at various heights with monofilament in a swirling celestial cluster. This work directly relates to my research on the everyday objects that bear witness in scenes of violence. I was recently honored to show this work as a curated project at the PULSE Art Fair in Miami, FL. It was so meaningful to speak to people who had been so directly affected and for the work to give them a place of memorial.

AZ: We know you’re working on a new body of work involving screen printing on ceramics, sounds like an interesting process, can you share your secrets?

PLH: I am so excited by this new work because it is a way to marry photography and ceramics. I am exploring layering colored ceramic slips (liquid clay) using monoprinting techniques on clay slabs. After building a base of color, I am layering images and text by screen printing directly onto the clay with underglaze. This is a very open, and active material exploration process.

AZ: You mentioned that part of the new body of work, you are researching the Lesbian Herstory Archives which is home to the world’s largest collection of materials by and about lesbians and their communities. What are some of the most fascinating things you’ve found?

PLH: I am currently doing initial research for a new project focused on the Lesbian Herstory Archives. It is a Brooklyn-based archive, community center, and museum dedicated to preserving lesbian history. I have been inspired by combing the boxes upon boxes of personal effects, photographs, love letters and activist memorabilia housed within. Last time I was there, I found a black leather jacket with bedazzled studs on the back spelling out “DYKE TACTICS.” Simply amazing!

AZ: The best piece of advice you ever received?

AZ: How can we keep in touch? (social media, website, etc)

The 13 Best Museums To Get Married At