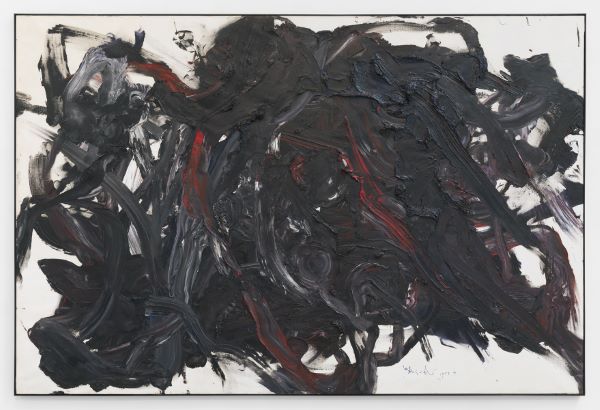 We’re going to be real honest, when we received the invite to the opening reception of Gutai: 1953 – 1959 at Fergus McCaffrey, we had to re-familiarize ourselves with Post-war Japanese art. But leave it to Fergus McCaffrey to reinvigorate our interest and school us a little bit on the revival of this era. For those unfamiliar with Gutai, it was founded by Yoshihara Jirō in 1954, and was the first radical, post-war artist collective in Japan. They were involved in large-scale multimedia environments, performances, and theatrical events. The gallery has been instrumental in introducing post-war Japanese art to the Western market and suffice it to say, they knocked this exhibition out of the park.

1. The works are incredibly profound and are museum quality in both scale and caliber

From Chiyu Uemae’s 120-lb, 27 years work of obsessively layering paint, nails and matchsticks (seen above) to Kazuo Shiraga’s foot paintings. In fact, art critic Michael Tapie had instructed the Gutai artists to make works on canvas so that he could sell them in hopes to monetize and sustain the group’s legacy.

2. The gallery’s intentional placement of works

Fergus’s intentional placement of both female artists, Fujiko Shiraga and Atsuko Tanaka, next to their husband’s work (Kazuo Shiraga and Akira Kanayama, respectively), reflects just how radical the Gutai group was to include women artists during a sexist time in their society. Be sure not to miss Tanaka’s Work (Bell), in which visitors are encouraged to press the button and hold it down to hear the sound of ringing make its way down the 12 bells and back –signifying the performative act of the viewer, while also forcing both the viewer and others around the work to hear it.

3. The entrance is a showstopper

During the opening reception, Senior Curator of Asian Art at the Guggenheim, Alexandra Monroe, recreated Saburo’s Murakami “Entrance,” when she burst through the gold sheets of paper. Now all visitors must walk through it to enter the exhibition. The work embodies the fundamental conceptual and performative ideas of Gutai.

A little background on Toshio Yoshida. Yoshida was one of the great original thinkers and innovators of Gutai. His Burn Paintings are seared and scarred plywood panels either with a soldering iron or red hot coals and according to Artnet, predate Yves Klein’s Fire paintings of 1960.

Sadamasa Motonaga was a Japanese abstract painter and a founding member of Gutai. As a part of the gallery’s exhibition, this Saturday (April 28th, 2018), they will host a special live performance of Smoke at 3PM. Smoke features fast-moving ethereal smoke rings, colored lights, and a musical score, and it was debuted by Motonaga in 1956 at Outdoor Gutai Art Exhibition. Recreated especially by the artist’s family, this is the first time that Smoke has been performed in the United States. So that basically means don’t miss it.