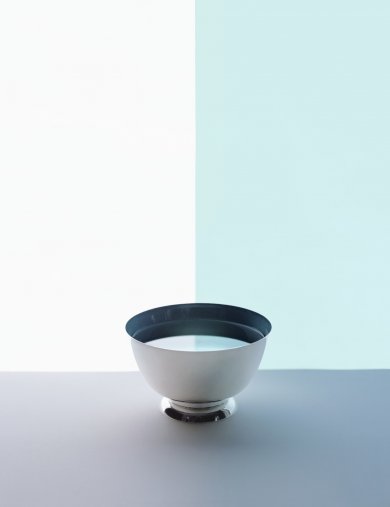 Stepping into Sarah Charlesworth’s exhibit at LACMA, there’s an overwhelming sense of tranquility. From the hues of green and red in her paintings to her striking, all-white photographs, Charlesworth does an outstanding job of telling a complex story through simplicity and omission. The photographs are characteristic of traditional still lifes, yet the color choice and arrangement of the subjects is unique. By twisting perception and omitting parts of photographs, at times leaving only text, Charlesworth invites the viewer to search for the story. Her paintings, which incorporate images as well, are of the same. By painting out parts in deep, emotional colors, Charlesworth creates, again, a longing for an answer.

Part of the “Pictures Generation” alongside Laurie Simmons and Richard Prince, Charlesworth became obsessed with how life is controlled by photographs and the ways in which we experience them via publications, film, and now social media. The exhibition, titled Doubleworld, is on view until February 4, 2018.

Not far from LACMA at Honor Fraser Gallery are large-scale paintings by feminist artist Miriam Schapiro. Seen for the first time on the west coast since their creation, these works represent the artist’s experimentation with technology between 1967 and 1971. Made with the aid of a computer, these works combine Schapiro’s new interest in digital imaging with her former collage works. The vibrant color choice and beautiful arrangement of geometry, makes these paintings an absolute must see. The exhibition is up until February 17, 2018.

Other women artist exhibitions in Los Angeles include:

On view until December 20

Marisa Takal: Beyond Oy Too Scared to Ha-Ha