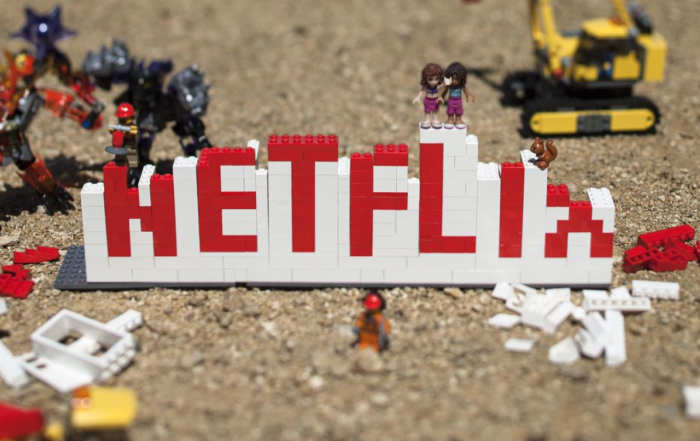 Have you ever been so deeply affected by an art exhibition that you wished there was a way to extend the experience? We’ve seen some pretty amazing shows this spring, both in New York galleries and museums and on Netflix. Read on to find out which movie or series you should watch next based on your favorite art shows this month.

You should watch: “The Jungle Book”

For one portion of his show “Good Weather” at Marlborough Contemporary, Julius von Bismarck uprooted plants of the jungle variety and suspended them in the sterile, white-walled gallery space. If seeing this eerie installation has you itching to see the plants put back where they belong, we suggest watching the 2016 live-action remake of the Jungle Book to put your mind at ease.

If you liked: Becky Suss’s “Homemaker” at Jack Shainman Gallery

You should watch: “Moonrise Kingdom”

Becky Suss’s quirky interiors remind us a lot of the interiors in Wes Anderson movies, just without the people. It’s not hard to imagine the rowdy bunch of kids from “Moonrise Kingdom” congregating in one of Suss’s living spaces.

If you liked: Martha Cooper at Steven Kasher Gallery

You should watch: “The Get Down”

Despite the grit and violence of the era, there’s something undeniably beautiful about the street art and music produced in the Bronx and Brooklyn during the late ’70s and early ’80s. Photographer Martha Cooper’s current show at Steven Kasher Gallery pairs perfectly with the Baz Luhrmann-directed series “The Get Down” about the emergence of hip hop in the Bronx—oh, and did we mention that Jaden Smith plays a graffiti artist named Dizzee?

If you liked: “Lygia Clark: Modulated Space” at Luhring Augustine

If you’re into minimalist geometric art, Lygia Clark’s show at Luhring Augustine is for you. The Brazilian artist’s work is fairly similar to that of Cuban-born Carmen Herrera, whose first museum show at the Whitney last year coincided with her 100th birthday and caused quite a stir—so much so that a documentary, “The 100 Years Show,” was made about it.

If you liked: Kehinde Wiley’s “Trickster” at Sean Kelly Gallery

You should watch: “What Happened, Miss Simone?”

For his latest show at Sean Kelly Gallery, superstar painter Kehinde Wiley made portraits in his typical style, but this time, instead of his usual anonymous subjects, he’s painted other well-known contemporary artists of color. If these paintings have you feeling inspired, check out “What Happened, Miss Simone?” to learn about the life of legendary musician and activist Nina Simone.

If you liked: Eric Fischl’s “Late America” at Skarstedt Gallery

You should watch: “Casting JonBenet”

Kids wearing American flags, a vaguely off-putting perception of American culture—both of these elements can be found in Eric Fischl’s show currently on view at Skarstedt Gallery and the Netflix documentary “Casting JonBenet.” Fischl’s show “Late America” features generic poolside scenes straight out of an American suburb with the figures engaged in strange interactions, while “Casting JonBenet” reminisces on the wildly sensationalized murder of 6-year-old beauty queen JonBenet Ramsey.

If you liked: “Diane Arbus: In the Park” at Lévy Gorvy

You should watch: “Finding Vivian Maier”

Diane Arbus has received ample recognition for her photographs, most of which are portraits that came from chance meetings of the photographer and her subjects throughout New York City. Several years ago, a man found boxes of negatives that turned out to be the work of a mysterious and extraordinarily talented street photographer named Vivian Maier, who, contrary to Arbus, received no recognition at all for her work when she was alive. The resulting documentary, “Finding Vivian Maier,” is fascinating—we highly recommend it.

If you liked: Anicka Yi’s “Life is Cheap” at the Guggenheim

You should watch: “Planet Earth”

If you can find beauty in bacteria and insects like Anicka Yi does in her show “Life is Cheap” at the Guggenheim, you’ll love the beautifully-shot series “Planet Earth” from BBC. For major Anicka Yi vibes, pay special attention to the “Jungles” episode in Season 1 which features impossibly close-up footage of ants and some stunning time-lapse sequences of fungi sprouting up from the jungle floor.

If you liked: “Florine Stettheimer: Painting Poetry” at the Jewish Museum

You should watch: “Midnight in Paris”

Ever wished you lived in the ’20s? We’ve got two options for you: go see the Florine Stettheimer show at the Jewish Museum, or watch Woody Allen’s “Midnight in Paris.” Both the paintings and the film will give you a new appreciation for this golden age of art.

7 iPhone Only Photographers You Should Be Following on Instagram