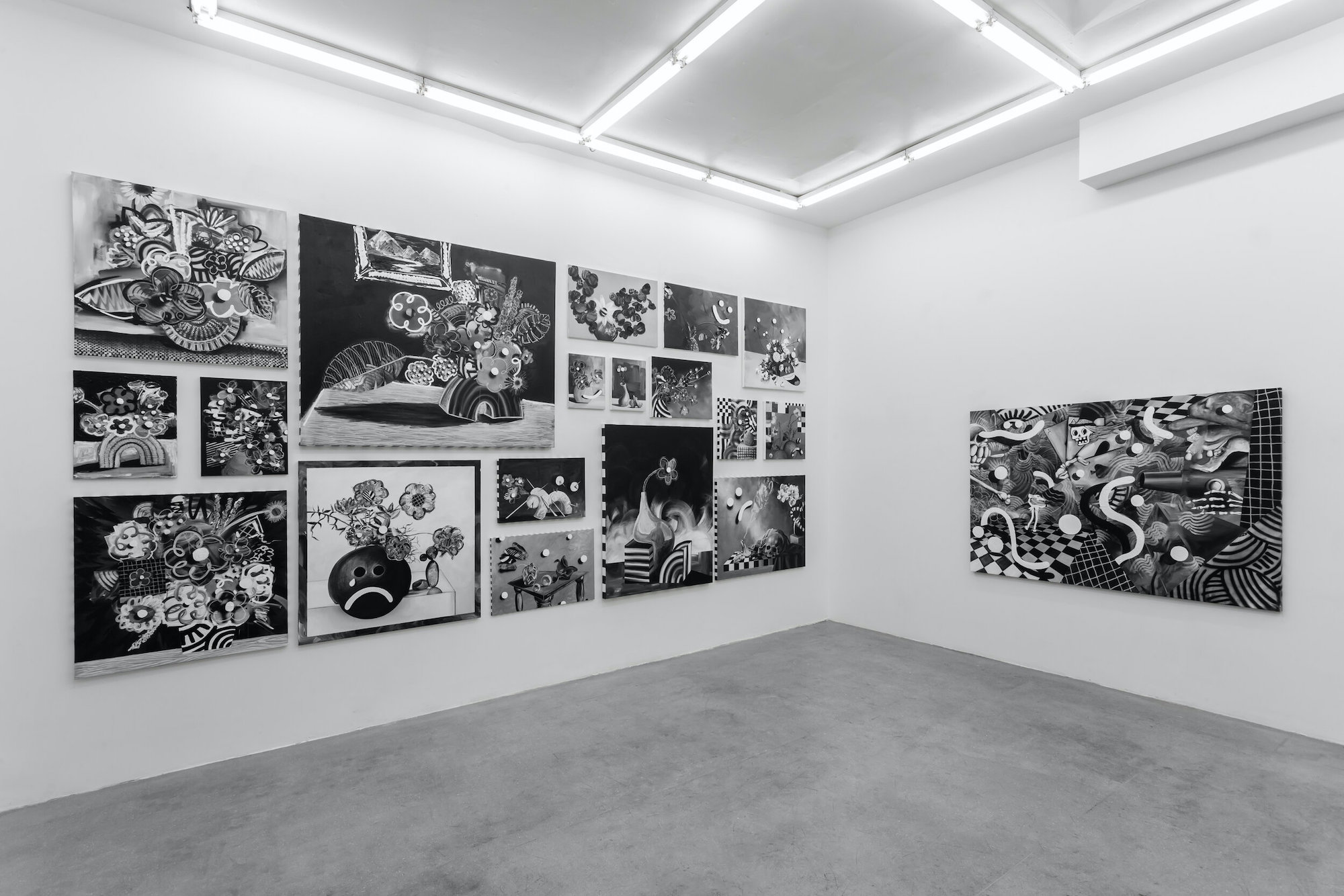 Earlier this month, Vernon O’Meally opened his latest solo exhibition “Flowers for Minnie” at ABXY. The show, which features O’Meally’s greyscale and black and white paintings of flowers and linear abstractions, invites viewers to allow emotions and sensations evoked by the works to emerge.

To dive into O’Meally’s work involves allowing sensations to overwhelm one’s experience: the musicality of his brush strokes, high contrast details serving beacons of hope and longing amidst darkness, and allowing the excruciating labor of joy to crack through the grout of depression.

O’Meally indulged us in some of our more nuanced questions about his work, process, and personal journey in a recent interview.

These paintings reflect a far somber tone than your previously psychedelic works, though formulated in advance of the pandemic and today’s intensified political climate. What happened earlier, when you were working on this particular series, to inspire the “minor key” color palette shift?

Vernon O’Meally: When I first arrived in Germany for an artist residency last summer I had planned to do a series inspired by the idea of a rainbow in the dark. I wanted to incorporate that colorful rainbow form in these grey linescapes I was making. In that process, I became less attached to the form of the rainbow and more determined to get everything I could from the greyscale.

At the same time, I started to fall into a dark place psychologically, so the greyscale naturally mirrored my state of mind.

Andre 3000 has a line in a song called Interlude on Tha Carter IV. In that song he says, “Today I feel electric grey, I hope tomorrow neon black.” Those words were something I considered a lot and I wanted to make that manifest with this somber palette.

I was seeing a lot of black and white tiled floors in churches and religious structures in Europe. In those contexts the colors are meant to symbolize good and evil so I was definitely interested in the question: why is white associated with “the positive” and black “the negative” in symbolic representations of good and evil? That’s of course a question I want the viewer to consider as well.

But I’m more interested in intangible forces than intangible questions. With this series I mostly intended to convey how I felt in the course of a depressive time for myself.

Nevertheless the floral works on back wall of the gallery represent a web of different moods. Flowers mark so many different occasions and moods in our lives. For example, the same flower used in a wedding can also be used in a funeral.  I’m hoping that when the viewer discovers these distinct bouquets, they can identify one or more that reflects their current mood(s).

Your use of material is rather varied, including acrylic paints, resin, sand, spray paint, neocolor, and collage. Is there a significance in your choice of materials – i.e., the quick-drying nature of acrylic and spray paint, the patchwork of collage, etc.?

I use a spread of materials frequently to get certain textures and dimensional results. When I was making this work in Europe I was in a position where I should have been having the time of my life, exploring the world, and focusing on the work – but sometimes I just couldn’t.

At night I would go to the studio and just start attacking the canvasses. I was doing these loopy scribbles with Neocolor and the flower motif started to develop and expand out of those chalky loops. When I wanted something to add a more 3D effect to those flowers, I used a combination of black spray paint and white acrylic to make it look like the pistils (centers) of the flowers were popping out from the canvas. The result is an optical illusion that disrupts the viewers perspective.

Most of the collage elements in this collection do the same thing. I like to play with combining materials and techniques in ways that change the viewer’s perspective, or at least make them question it.

Choice of music – what kind of music, instruments and sounds do you listen to when creating your art? Would you describe your listening experience as getting in a state of flow?

I listen to so many different types of music; it’s impossible to say one kind for sure. It always depends on the mood that day or what I need to get done. I love old school artists, like Aretha Franklin and Otis Redding. In terms of punk rock, my favorite band is definitely Bad Brains. I like heavy metal particularly towards the end of my day when I want to get crunk and work faster.

When I’m already in a groove and things are moving along, I like listening to more contemporary artists like Kendrick Lamar, but when I know I’m coming to the end of a work day, I tend to circle back to “Space Truckin” by Deep Purple or “The Look of Love,” by Isaac Hayes. Outkast, Kid Cudi, and jazz are always in the mix. I love guitar solos and long instrumentals especially when I’m doing my linescape work.

I follow the rhythm of whatever is playing so while these sounds are all so different, every one of them is really important to the process.

And lastly – who is Minnie?

Minnie is many. ‘Flowers for Minnie’ in a general sense translates to “flowers for the dead.”

In my case, that’s my grandmother who passed last summer. Her name was Minnie Lee Brinkley. She was a wonderful person and certainly my most favorite Minnie.

Flowers for Minnie will be on view (by appointment) from June 4 through September 4, 2020 and include exhibition essays by Jasmine Weber and David C. Hunt.