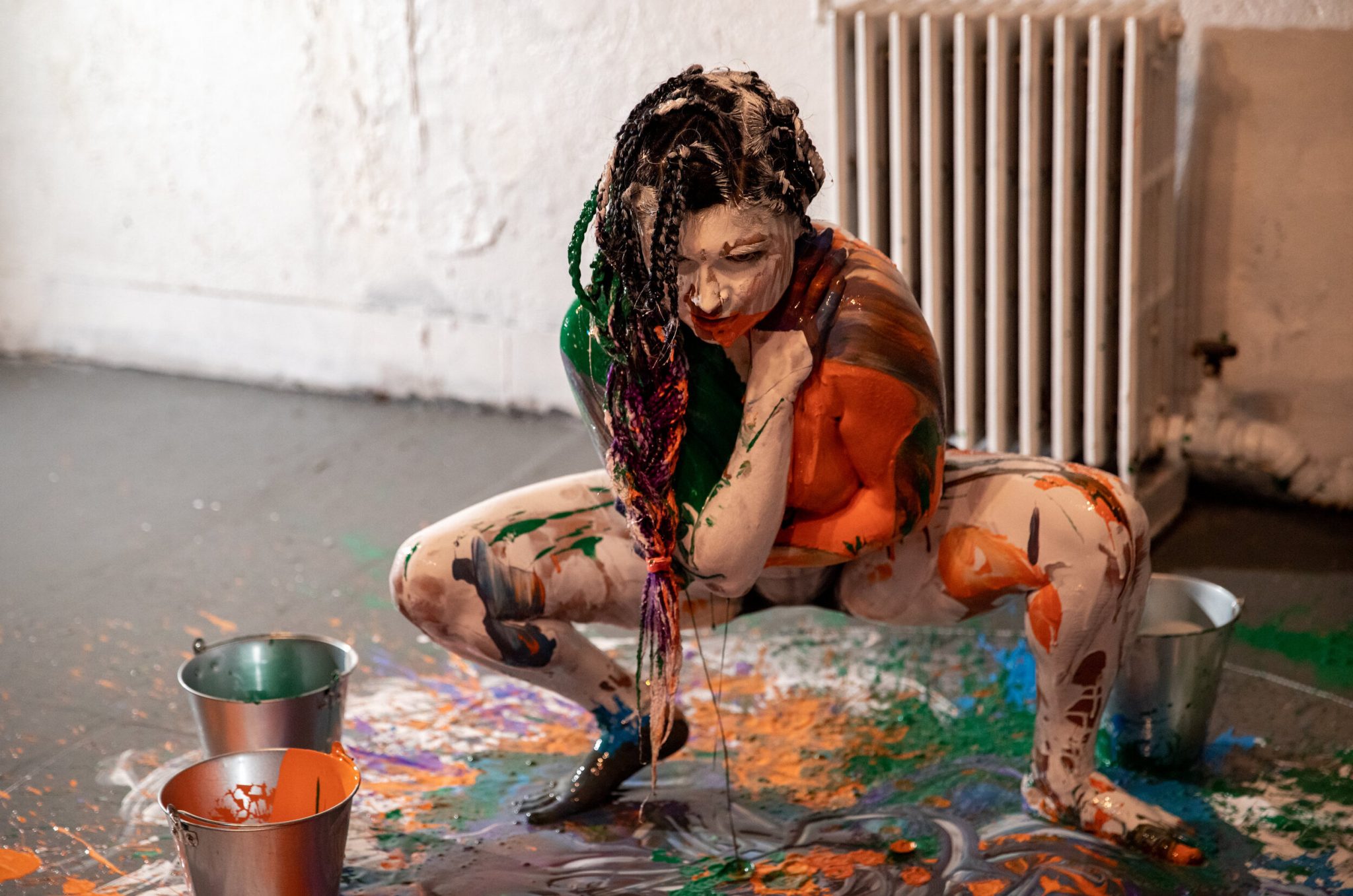 In March, back when crowding with strangers, sitting on floors, shaking hands and the occasional air-kiss was a thing, the inaugural “The Immigrant Artist Biennial” officially launched with a well-attended performance program at Brooklyn Museum.

Partnering with non-profit institutions, the biennial was scheduled to take place all summer across New York City’s five boroughs. When the city shut down, the organizers had to return to the drawing board; they shifted much of their programming into the digital sphere. Spearheaded by double immigrant and artist Katya Grokhovsky and supported by her all female curatorial and digital team, TIAB has presented some 60 artists all born outside of America but living in the country.

The biennial has taken place at Elizabeth Foundation for the Arts, at socially distanced performances at Green-Wood Cemetery, and the final phase of the biennial, four online exhibitions accompanied by a panel discussion and virtual performances. The remarkable women from The Immigrant Artist Biennial have navigated restrictions managing to showcase diverse artistries anchored around migration, assimilation, inclusion and exclusion, decolonialism, erasure, and empowerment, topics related to immigration during a pregnant moment where immigrants are under siege, impaired by both COVID-19 and our government. TIAB is an important platform to humanize and showcase the talent and importance of immigrants in America to virtual and IRL audiences alike.

Anna Mikaela to Allison: After we individually scored more than 200 Open Call applications and collectively reviewed and considered the top scoring artists, each curator was responsible for conducting studio visits. Due to the pandemic we did this on Zoom. Allison, what were some of the most rewarding moments from meeting with artists and your revelations during this process?

Allison: The virtual studio visits all took place during the early months of the pandemic when so many of us were hunkered down at home. Some artists spent the lockdown in or near their studios, such as Stefana McClure who gratefully welcomed the extra time she could spend in her beautiful upstate studio. Other artists had limited or no access to their workspaces because of quarantine restrictions. Johanna Strobel, for example, whose studio is located in Manhattan, was quarantining with her family in Germany, so she was not able to show me the components of her work “I See”which is featured in our “Mother Tongue” exhibition. As a result, our conversation was largely focused on how she had been adapting her practice outside of her studio and how her work had changed because of this. Holding these virtual visits during such a tender global moment gave our artists the chance to share not only their work with us but also their individual concerns and experiences related to Covid-19, immigration, and beyond, which I think strengthened the overall artist/curator relationship.

Anna Mikaela to Katya: It is becoming increasingly clear that collaborating is a means for freelancers to survive the economic system and lack of resources to foster intellectual exchange, access to an expanded network, and sharing of labor. Katya, what are your views on collaborative curating and why did you choose to co-curate TIAB’s open call with us, your curatorial advisors?

Katya: I think in regards to TIAB, collaborative curating should be one of the aspects of the biennial production, to foster not only opportunities for exposure of artists’ works but also for emerging curators to have opportunities to practice and gain experience and exchange ideas. In terms of the Open Call exhibition co-curating, our largest group exhibition of the first TIAB iteration, I was specifically interested in the possibilities of new discoveries and different opinions by the curatorial advisers, in order to expand our artist outreach and move beyond my own taste and predisposition, as the chief curator.

Katya to Mary: What is the role of debate within collaborative curating and is consensus important?

Mary: I believe mutually respectful debate plays a key role in collaborative curating. While it may be difficult to reach full consensus, in this co-curatorial process, for instance, we had many productive conversations to ultimately reach majority consensus about exhibition choices. These moments of debate provided vital opportunities for curators to lobby for the inclusion of works about which they felt particularly passionate about, or for curators to indicate or agree on problematic areas of concern as a collective.

Anna Mikaela to Mary: How did working on “Mother Tongue” expand your understanding of language, the concept of the mother tongue, and its transitional anxieties in relation to migration and immigration?

Mary: While curating this show, I learned that I have often been quick to romanticize the multilingual experience, without fully taking into account its pitfalls or anxieties. As you note, and as we point to in our curatorial statement, reading, writing, or speaking one’s mother tongue and secondary or tertiary languages can also provoke discomfort and disquiet, whether it’s from reconciling with the loss of a mother tongue across generations, or the awkwardness that arises from struggling to communicate in a new environment. In particular, Cecile Chong’s work, “FLUENCY,” is so compelling in evoking the chaos and humor inherent in her trilingual upbringing, and Marina Kassianidou ’s work, “A Partial History,” is a beautiful and elegiac translation of her ancestors’ Greek school books into a visual language of lines that record time and touch across centuries. Cecilia Kim’s “English Lessons on Hospitalization” is a piece that really stood out to all curators during the jury process for embodying many of the themes we were considering for this exhibition: the difficulty of being vulnerable and true to oneself in an adopted language, and the complexities of the translation process we all experience, even monolingually, as we process our thoughts into speech, and then into more refined or “proper” linguistic expressions depending on our environment.

Open question from Mary: The COVID crisis has forced artists and curators to quickly and creatively pivot their practices to encompass the virtual environment. There has been a sea change towards online studio visits, exhibitions, performances, panels, and other programming, with distinct advantages and disadvantages. What is one change you are particularly hopeful about for the future of our increasingly digitized artworld?

Anna Mikaela: The virtual exhibition is here to stay and it will cement itself somewhere in between a book and a physical exhibition. Walter Benjamin wrote that mechanical reproduction devalues the aura of an artwork. Today, however, employing a Marxist perspective, the number of times a work is reproduced in a book, online, and in the media is more likely to increase its value as it revitalizes and invigorates and highlights living labor – not synonymous with aura, but comparable. Artist books, catalog raisonées, and exhibition catalogs – populated with reproductions – are important validating milestones with the ability to shift artists’ trajectories. Digital exhibition-making can do the same.

Katya: I echo Anna Mikaela on the value of the virtual exhibitions and am hopeful that our increasingly digitized cultural future will bring forth more accessibility and national international exchange in the artworld and beyond. I think the virtual space is here to stay for the foreseeable future and I am actually excited about new and innovative ways we can extend our practices and increase visibility and dialogue, without space, time and travel constraints. I truly believe and hope that we can learn from this time to adapt and grow and change as the world changes, otherwise our culture faces extinction.

Anna Mikaela to Katya: You are the only one of us that has an artistic practice. Beyond TIAB, you have been creating new work for the digital sphere. How have you had to reimagine your art practice to adapt to the virtual space?

Katya: After losing access to studio space during lockdown, I felt I had to adapt quickly and pivot my creative output towards the digital. I focused on digital painting and collage and started a project called “Postcards from America,” producing a painting a day to timestamp and reflect upon my own time in the U.S. as an immigrant. Since March, I have had to adapt, like most artists, to virtual studio visits, teaching, performances and artist talks and even though I now have access to a studio space and I am back to working on sculpture and installation, I have now added a new digitized pathway in my work, which I would most likely would not have before the pandemic.

Allison to Anna Mikaela: What messages surrounding language and communication did you, a curator with a multicultural background, feel it was important to convey through the works in this exhibition? Which work particularly resonates with you, and why?

Anna Mikaela: ‘Language’ in “Mother Tongue” ranges from Katreen Sorokina’s humorous text-based works juxtaposing the Cyrilic, Russian, and Latin, English, alphabets and Dai Furen’s survey of U.S. census reports from 1790-2010, both which critically investigate semantics, to a broader interpretation of the word mother, using it as an entry point into heritage, lineage, and the dissemination of culture. Two performance works by Silk Worm Pupas and Salomé Egas, enliven myths. Silk Worm Pupas, consisting of two artist-poets, interweaves a folktale of silk worms with contemporary silk production in a VR setting, while Egas performs Latin American colonization through abstract reproductions of indigenous and christian rituals. I am interested in multiplicity and interdisciplinarity which lends itself well to being both multicultural and multilingual; it was important for me to centre “Mother Tongue” around hard-to-define and slippery themes that opens to questions rather than providing answers, which in a sense reflects immigrant experiences, including my own.

Open question from Katya: What inspired you to get involved in TIAB as a project?

Anna Mikaela: During a staff meeting that Mary had invited me to I quickly understood that TIAB was strongly anchored within its mission to show marginalized artists to present diversity of immigrant experiences and their contributions to society gearing up to the 2020 election, and, as my interests lie in decolonization, gender, and socially minded curating, I decided to join the (all-female!) team. I was also keen to work closely with Katya and Alex Sullivan, our head of digital, who is a practicing artist. I curated my first independent project with Ayana Evans, a performance artist, at MAW (co-founded by artists Liza Lacroix and Moch Hahn) and have since often seeked out artist-curators. I find that curators who are also artists bring a different (ranging from playful, pragmatic, and/or practical) perspectives to materiality, making, and technique offering additional layers to curatorial considerations.

Allison: I met Katya in 2019 at Assembly Room, an exhibition space empowering independent women-identifying curators. After hearing her talk about her plans for The Immigrant Artist Biennial with such passion and vision, I immediately knew that this was a project I wanted to be a part of. We all have a responsibility to make the artworld a more inclusive place for minorities and marginalized groups, and TIAB’s commitment to promoting representation for immigrant artists in the U.S. is as urgent now as ever. This was an ambitious undertaking, especially during an election year and a global pandemic, but our dedicated team and incredible list of artists made it all happen. However, the work does not stop here.

“The Immigrant Artist Biennial 2020 Virtual: Here, Together!” is on view online through December 18th, 2020. The four exhibitions are accompanied by a robust program of virtual events.