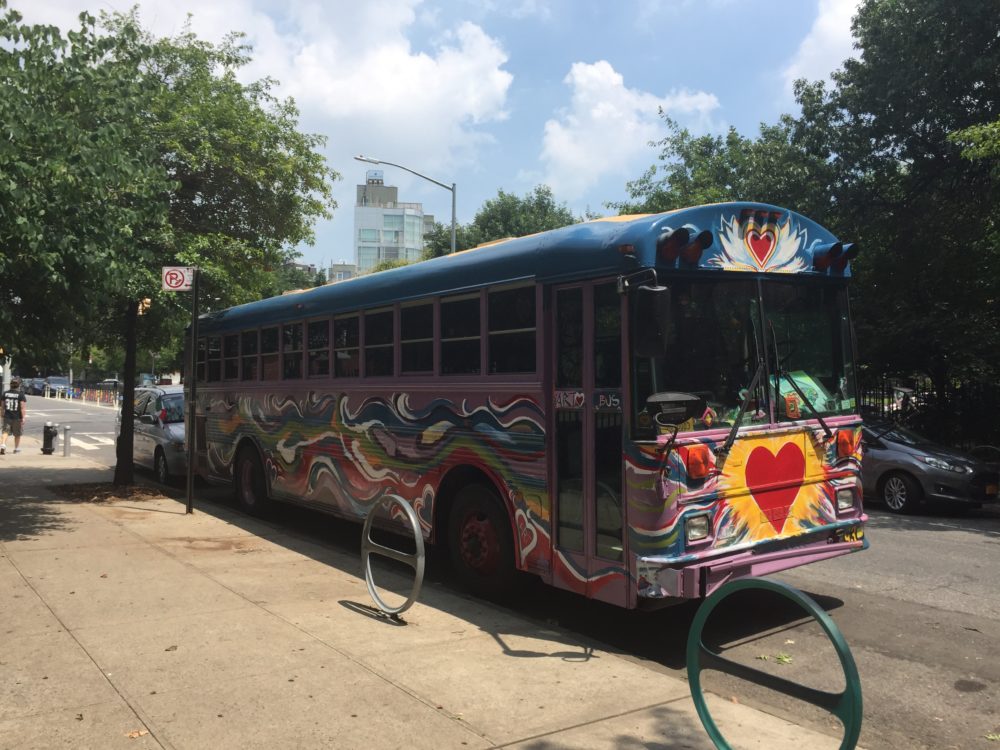 Beginning in the 1960’s and rising to full peak in the 1970’s, the art of van painting became an extremely popular trend. Most of what could be seen on the streets of any major city were revved-up muscle cars, motorcycles, and vans of all makes and models, sporting depictions of airbrushed loin-cloth clad barbarians battling evil wizards, tripped out tie-dye-like spirals, Grateful Dead tributes, Pegasuses, lone rider cowboys, Star Wars appreciation, even just some simple color patterns used to discern a van from all the other normal Ford E-Series’. It seems that now, in 2018, that trend has emerged again, only this time the focus has shifted from vans to buses.

It was probably Ken Kesey and the Merry Pranksters who first painted an old school bus and used it to travel the country back in the 60’s, setting up what were known as “acid tests” and getting into all sorts of mischief. Riding around in a bus they named Furthur, the Pranksters had an eye for artistic flair. They decorated Furthur with a mural of vibrant colors and patterns, like a rainbow put through a kaleidoscope, as well they painted a nameplate and mounted it to the front of the bus. Furthur was the first of its kind, and today that spirit lives on.

If you take a walk today through Greenpoint’s beloved McCarren Park, you’ll notice something rather out of the ordinary. Buses, usually two or three of them, adorned with decorations and paintings that the bus owners crafted themselves. They are reminiscent of this time in the 60’s and 70’s, they aren’t exact replicas, instead they keep to their own modern spirit. One of these buses, owned by @katmondieu, is painted black, purple, white and green, depicting a wooded scene with an aurora borealis style sky above it. The bus is an incredible sight, as it is a living work of art, for it is not just a painted bus, but also the home of Julie Snyder (@katmondieu,). A solar powered, cat-friendly, living art piece, sounds like something straight out of the love generation.

Another bus you’d see around McCarren Park is the “Muckrock NYC” bus though this might not be its official name. A blue and white school bus, that combines the idea of bus living, 70’s bus painting, and modern-day graffiti. This bus features a blue painted side, with puffy white clouds, and a great red heart, being tangled up by beautiful Monarch butterflies. Inside the heart are the words “Muckrock NYC.” On the opposite side of the bus is four pairs of white, humping rabbits, again with the word Muckrock emblazoned in large font. The whole bus feels like someone came by one night and sprayed graffiti all over some random bus, and that is exactly what the owners would have you believe. Owned by Nikki Gordon and Ryan Fazio, @Gypscity and @Elephantsinthimbles respectively, the Muckrock bus has become a staple of McCarren Park, and whenever it’s gone, you can be sure that the co-owners are out on some sort of adventure.

One of the other buses you’ll possibly see in rotation around the park is aptly named Art Bus. Painted in a style more like that of Kesey’s Furthur, this bus is nothing short of a must-see sight. Cruising around with two huge red hearts painted on the front of the bus, and spectacular wispy waves of color all along the sides, front, and back. It’s truly a bus that would make the Merry Pranksters proud. And of course, like the others, it’s entirely hand painted.

If you find yourself needing afternoon plans, head over to McCarren Park and see these beautiful buses in person!

Photographing Protests Through a Prism