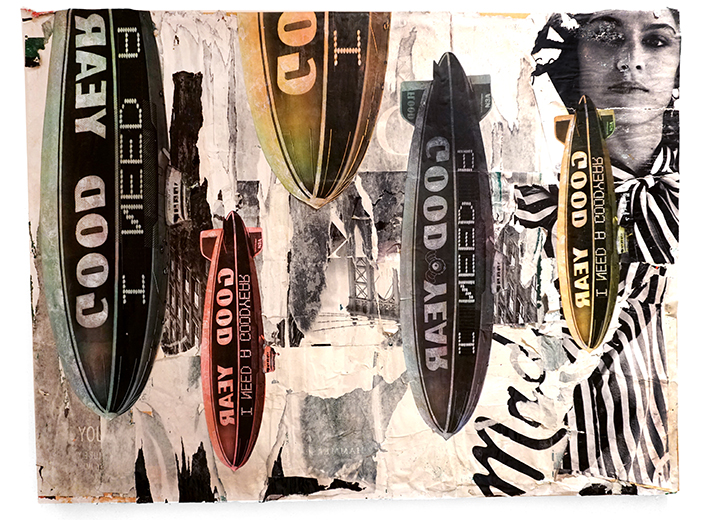 Have you ever had someone throw a pot of boiling water at you from a fourth-floor window? FLOOD the artist has – a few times, actually.  Such is life, or rather the struggle of being a street artist in New York.

FLOOD uses spray paint, wheat paste and old posters to share his story on the streets of New York. His art consists of gorgeous masterpieces across walls on city blocks as well as collages from torn down poster bills – revamped to tell a new and unique story to passers-by.

Art Zealous caught up with FLOOD and chatted all things street art.

Flood: Well, I watched a lot of cartoons and graffiti trains roll by my eyes since I was a kid. I remember seeing Keith Haring drawings around the subway and even on my station, Hoyt Avenue and that inspired me a lot.

My favorite writers were DONDI, SEEN and local riders CAINE1 and KN who taught me how to write. I got busted while tagging at the Hoyt Avenue Station by infamous vandal squad duo CURLY and FERRARI. I was just a kid so they let me go.

As far as school goes, I went to art and design high school and did some time at Cooper Union, but split to move to Los Angeles to paint and sculpt for Disney Imagineering. Shhhhhh don’t tell. 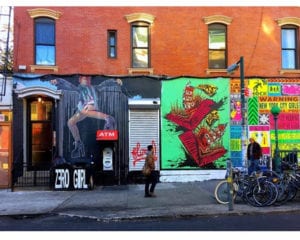 F: I was breed and spread in Astoria Queens.

F: Currently I’ve been listening to music that has informed my next two pieces I’m working on. That would be Bad Brains -especially the Roir Tape- Reagan Youth, Cro-Mags, Negative Approach, Youth of Today and Quicksand.

F: I’ve had many, most are gone…CBGB’s for example. But my all-time favorite, ever since I was a kid is Central Park. That’s my spot, I get lost in it.

AZ: How does your work connect art, fashion, and music to tell stories?

F: I don’t know how or why I make the connections I do, I just know the urgency- the flood that I feel when that place in my head starts to make those kind of connections.

AZ: We love how you incorporate animated characters, music lyrics, original poetry and one of a kind fashion pieces in your work. How do you select which pieces make it into your pieces?

F: I am just making connections, it’s all about connections. Stopping time and flipping moments. I came from a subversive subculture and it’s just in me to be a street artist. I want people to feel my pieces like a song, but I have to sum up my songs and poems in a line or two, because you ain’t getting a New Yorker to read your novel on the street. 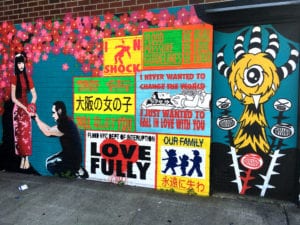 AZ: What are the challenges to working outside making street art in NYC?

F: The wind, the rain, the snow, the cops and the kooks! So many kooks! 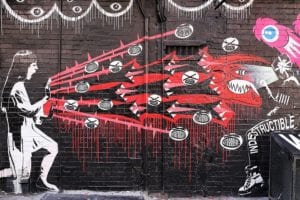 AZ: You take fashion ads, rework them and put them back in the streets to comment on the industry’s unattainable idea of perfection. Please elaborate on that.

F: When I was a kid, I would put up posters for my punk band and I would see the decaying advertisements on the street. I decided to pull them down one day and started to remove the layers. With all the peeling, the poster started to reveal itself to me and I would then start to make new connections. The poster informed me of what kind of advertisement I should then turn it into now. It was a new story. After I deconstructed the layers, often I would nail the poster back up on the street. This would twist the meaning of the content.

AZ: Do you have plans to take your street art out of New York and into a new city?

F: I would like to go anywhere and everywhere in the world to do street art. 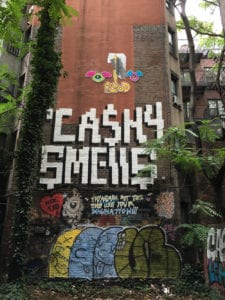 F: I have two new pieces you can expect to see from me very soon. One on Ludlow down in the LES and the other one in Williamsburg, BK. 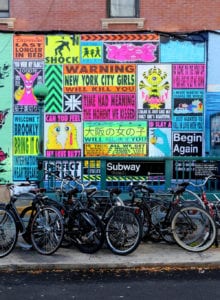 all images // courtesy of artist