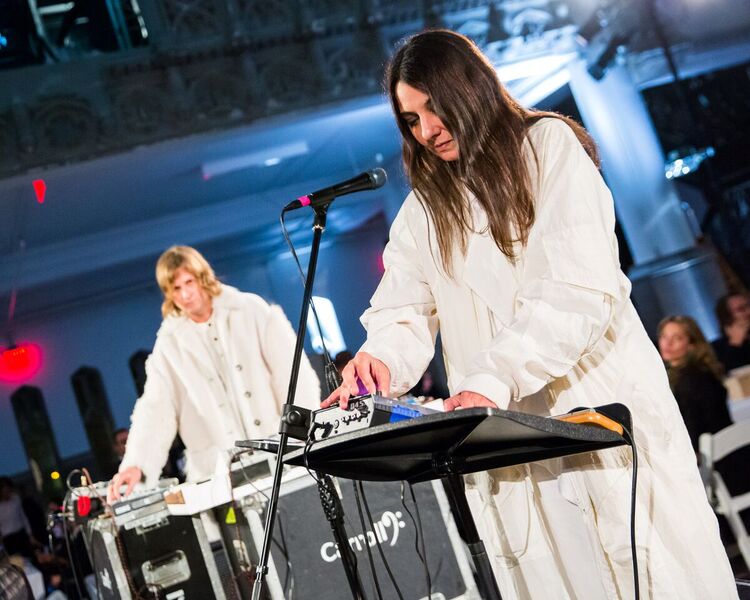 Now or Never by Yoko One performed by Lizzi Bougatsos, Brian DeGraw, and Josh Diamond. Photo courtesy of Performa.

On Wednesday, November 1, 2017, hundreds of guests gathered at the Harlem Parish, an exquisite church converted to art space and studio of Julie Mehretu and Jason Moran, to celebrate the opening night of the Performa Biennial.  The biennial holds events and has installations in various locations across New York City from November 1-19, 2017. Artists include Barbara Kruger, Xavier Cha, Zanele Muholi, and Teju Cole. The evening honored performance pioneer, Yoko Ono, and Performa board member, President of Solomon R. Guggenheim Foundation and longtime patron of the arts, Wendy Fisher.  Performa was founded in 2004 by art historian and curator Roselee Goldberg and is the leading organization dedicated to exploring the critical role of live performance in the history of twentieth-century art and encouraging new directions in performance for the twenty-first century.

The evening was marked by several of Ono’s quintessential installations and performance pieces including Painting to Hammer a Nail (1961), Wishing Tree (1981), Sky Piece to J.C. (1965), and Pieces for Orchestra (1962). Unfortunately, Ono was not able to attend the event, but her message, which thanked Performa and reflected on the growth of performance art throughout the past decades, was passed on by Performa creator and curator, RoseLee Goldberg.  Wendy Fisher also shared a few words with the audience and was full of praise for Performa and RoseLee Goldberg’s dedication to and influence on performance art and its community. Other notable speakers included Roya Sachs, NYC-based independent curator and the newest Performa board member, and artist, Laurie Anderson, who praised Ono and lead a reinterpretation of Ono’s post-2017 election Scream. The piece, along with others throughout the night, encouraged audience participation, and for 30 seconds, the Harlem Parish reverberated with guttural, cathartic screams.

A Dada-inspired, interactive dinner was created and curated by longtime Savoy chef, Peter Hoffman. It included salad inspired by the Dadaist writing method of tossing random words in a paper bag and letting chance create the poem, a fish course called Collage After Hausmann and Grosz, and Floating Forms After Hans, Jean Arp inspired meringues.

For more on Performa and its programs including the Performa Biennial, please visit performa-arts.org. Join the conversation: @PerformaNYC #Performa17 #PerformaNYC

What Happened In The Art World This Week On Instagram?