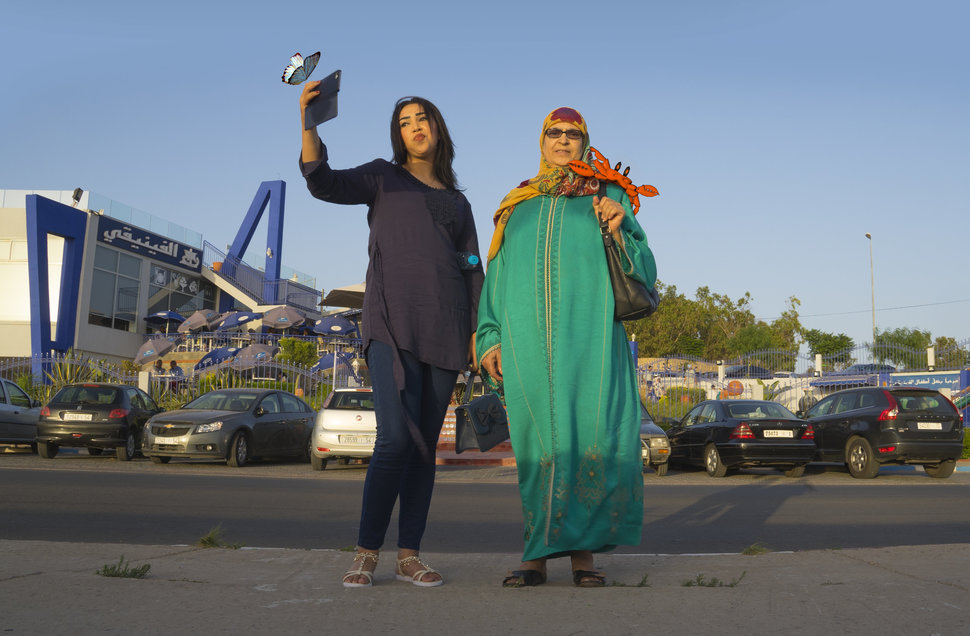 Walk into the main floor entrance of The Kitchen, nod a brief greeting to a downstairs employee, turn left, and make your way up to the second-floor exhibition space. You emerge into a bright room covered in photographs of a young Moroccan woman. You’re unsure of the context, but it must be suggesting something more. Continue down the corridor, and you’ll find yourself in the middle of a chaotic multi-channel video installation. The video is projected on multiple walls and on free-standing geometric surfaces. Where to look? You aren’t quite sure yet, so you take a seat in one of the floor-level chairs that are scattered about the room. Eventually, you choose one or a few perspectives from which to view the video, and you become immersed in Meriem Bennani’s latest multi-channel video installation Siham and Hafida.

The 30 minute, multi-channel video installation depicts the intergenerational tension surrounding “chikha” a traditional Moroccan dance. Chikha was popularized as a performance to combat French colonialism and was meant to bring viewers to the brink of ecstasy.  The sensuality of the dance rejected western traditions and allowed the performers and viewers to temporarily escape reality. Of course, the sensual and ecstatic performance perplexed colonialists.  “Chikhat” women were considered promiscuous, gluttonous, and therefore amoral by Western colonizers.

Fast-forward sixty years.  Morocco is settling into its independence, embracing the digital age, and chikha is being reclaimed by a younger generation. Search chikha on youtube and the primary result is young women performing the dance.  The Moroccan government has also played a role in the re-popularization of chikha, using it as a national cultural symbol and as a means to promote tourism.

Bennani’s Siham and Hafida explores the rebranding and evolution of chikha culture, and how it has influenced relationships between young and old chikhats. To portray this intergenerational tension, Bennani provides the spectator with an intimate view into the lives of two Moroccan women, Siham and Hafida. Siham is of the younger generation, enjoying the new glamour of chikha and promoting herself as a chikhat on social media. Hafida represents the older generation of chikhats who used the performance to arm themselves against the colonialists while maintaining a sense of cultural independence.

Bennani presents Siham and Hafida in numerous situations.  They take on their individual roles, each representing their own version of chikha culture.  One particular scene shows Siham getting her makeup done professionally and the hundreds of selfies that result from the primping. Soon after, she meets with Hafida who is evidently annoyed by Siham’s constant selfies, texting, etc.  Siham recognizes that Hafida is annoyed and says that it’s a trait unique to her generation.

Not only is Bennani’s piece an investigation into the evolution of chikha culture, but it also provides a commentary on both feminism and intergenerational relationships in the digital age. Feminism has gone through major transformations since our grandmothers’ time, as has the way we interact and communicate with the world around us.  This has undoubtedly influenced the way that we communicate with older generations. For a younger generation, sending a quick text or a snapchat is not an intentional sign of disrespect, but it can be read that way by older generations. And contemporary feminism is not necessarily a “rights, not roses” situation.

In Siham and Hafida, Bennani playfully navigates this difficult territory, and provides an objective lens into how these intergenerational conflicts play out in Morocco. Ultimately, the piece seems to suggest that the coexistence of these cultural ideals is most beneficial in the perpetuation of feminism and cultural/political independence.