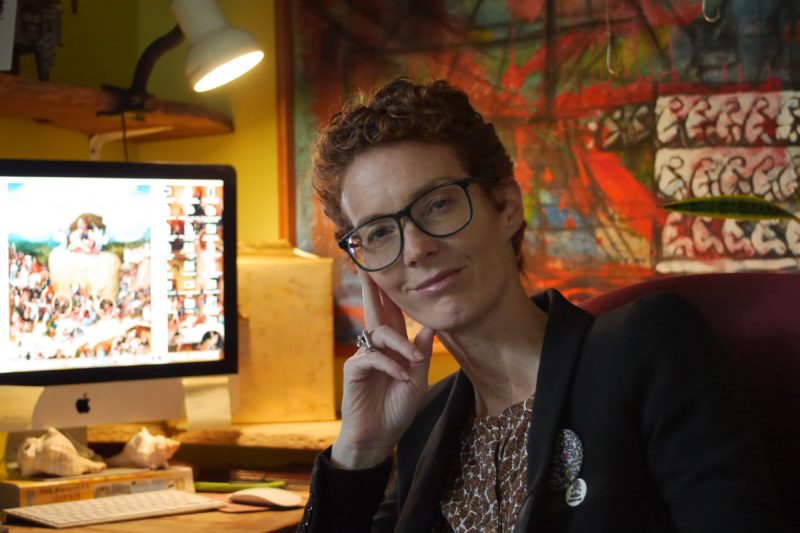 Armory Weeks makes landfall in New York starting on March 7th and over 10 satellite fairs will be taking place throughout the city. One of our favorite fairs VOLTA NY, will once again call Pier 90 home starting March 7 through March 11. So why do we love VOLTA NY? Well for starters, they showcase contemporary art positions in an approachable way accessible to younger art-lovers and seasoned collectors alike, which is something our young readers can get behind.

We wanted to get the scoop on this year’s edition, so we caught up with VOLTA’s long-time Artistic Director, Amanda Coulson.

Art Zealous: Where did you grow up?

Amanda Coulson: I was born in New York but we moved to London when I was very young and, after The Bahamas became independent in 1973, my Dad moved back, so I spent time between the UK and Nassau.

AC: Up at 5:45 a.m., scan my emails and answer anything urgent since the Basel office is 6 hours ahead. Get in the car barefoot and put on my sneakers and drink a coffee that my husband made while he drives us to Fort Montague beach, a few minutes away. We walk for 45 minutes, and it’s pretty much to only time of day we have time to talk about things other than family logistics — as a co-founder of VOLTA, we have a lot of business to discuss as well! We always “hail” (Bahamian dialect for greeting) all the other people at the beach: the gentlemen’s group who are all in swim trunks but seem to just sit under the trees and talk politics; the outdoor preacher; the Rasta who does his exercises but also picks up flotsam while he’s doing it; the fitness freaks who are seriously training.

It’s considered extremely rude in The Bahamas not to greet everybody you pass on the road. We head home and wake up our daughter and get her fed and off to school. If we are doing well for time, I take the scenic route around the coast to appreciate the ever-changing sea view, but if we’re running late (more often than not) we cut through the island, which is less picturesque and fairly potholed. I sit in the outdoor school cafeteria catching up on more emails for about a half hour or 45 minutes; the traffic in Nassau is nuts, so it’s better to wait until after it’s dissipated, and then I head into the office. By 10 a.m., all my co-workers are there, but I’ve been up for more than four hours and have probably already done a couple of hours work… so usually it’s coffee time again!

AZ: You’ve also lived in Paris while getting your undergraduate degree—what advice would you give to someone visiting the City of Light for the first time?

AC: Go in your walking shoes, forego the Metro and walk everywhere or at least take the bus so you can watch the city. Visit the outdoor food markets; they are a great place to get a feel for life, and you can get the best fresh food and take a picnic to some of the smaller parks. Obviously, you’re going to want to hit some of the key tourist destinations, but if you walk on the smaller side streets to get there, you’ll get a glimpse of real Parisian life.

AZ: You were one of the co-founders of the VOLTA fair in Basel, Switzerland. How has VOLTA changed since 2005?

AC: Well, it’s grown a lot—we started with 23 galleries, went to 45 and then to 80—and that definitely affects the overall feel, even though the team and I work very hard to keep it extremely personal and human. In the beginning, the fair was also very do-it-yourself: we were up ladders hammering in booth signage, screwing together furniture, and picking coffee cups off the floor. Of course, the biggest change is the market itself and the growth of fairs in general, which means the energy is different. It used to be much more of a celebration, it seems like everybody arrives now already a bit tired from the last trip or fair, so it’s a bit more relentless. Once everyone gets moving — and collectors and critics begin filing in during the preview — that familiar energy rushes back.

AZ: You’re currently the Director of The National Art Gallery of The Bahamas. Can you talk to us about the art scene in The Bahamas and the Caribbean?

AC: The Caribbean is a space of incredible creativity. I can say honestly that it’s a literal goldmine of talented individuals. However, it’s very different because we don’t have the critical mass of informed audience or patrons to support commercial galleries, and while the artists are extremely advanced, the market is still nascent. For many of us, the tourism market also radically skews culture in a detrimental way, but each nation is also very different, so it’s hard to speak about “The Caribbean” as a blanket standard. As a rule, we are countries that have been ravaged by colonialism, have massive economic and political challenges, and problematic histories. So there is plenty to mine artistically, but not very much support.

AZ: What are some things that people might not know about The National Art Gallery of the Bahamas?

AC: Probably quite a lot! It’s an emerging institution founded in 2003—we only become independent in ’73 so The Bahamas is a young nation—and at 15 years of age the NAGB is still identifying its role in our society. We have a collection of Bahamian art which, despite regional stereotypes, is not all naïve or picturesque and has a strong contemporary direction. We do a lot of community and educational work—in the inner city, on the Out Islands—as well as simply activating exhibitions in our galleries. We just completed a capital project, which added a 200-seat outdoor amphitheater for screenings and performances; we expanded into the neighboring property to create a sculpture garden; and we have plans for a building on site to have space for conservation and storage… there’s a lot going on!

AZ: Do you have any advice for new, young collectors who plan on attending VOLTA?

AC: Be thorough: pay attention to the floorplan to make sure you see everything. Don’t be afraid to ask questions: the dealers are excited about the work they represent are usually more than happy to share their insights. Wear comfortable shoes, hydrate and take breaks—there is a lot to see and sometimes you need a “palate cleanser” to freshen your eyes and brain: have a coffee, look out the window and watch the Hudson. Most importantly: listen to your belly, not your ears.

AZ: What are you looking forward to the most at this year’s edition of VOLTA?

AC: I sort of hate to say what I look forward to “the most” or give top ten picks or whatever because it feels unfair to all the other people who I can’t mention. I’m extremely excited to be working with Mickalene Thomas and Raquel Chevremont on their vision for the Curated Section, a show entitled The Aesthetics of Matter. The artists they have assembled under this interdisciplinary umbrella of “collage” will be incredibly insightful and dynamic for audiences.

To name two others — one a returning gallery, the other a new exhibitor: Fred Giampietro Gallery (New Haven), one of our stalwarts from five or six years ago, is staging a cross-generational survey between Robert Reed and Enrico Riley. Both African American male artists, they met at Yale University during Reed’s professorship in the Department of Painting and Printmaking and Riley’s MFA studies there. This inspiring pairing is precisely why we occasionally “bend the rules” and permit two solo projects within one of our larger booths, to underscore the common threads and unique points of view between two artists connected by collaboration and heritage, though separated by some three decades. Among our new exhibitors, I am really looking forward to Oniris (Rennes) solo mini-survey of Véra Molnar, a pioneer of computer art since the ‘60s and featured right now in the exhibition Thinking Machines: Art and Design in the Computer Age, 1959-1989 at MoMA New York.

AZ: We love VOLTA’s approachable way that gives access to younger art-lovers, how do you achieve that?

AC: Honestly, it sounds super corny but VOLTA started as a Mom and Pop business—I found out I was pregnant with our second daughter on the first day of the first VOLTA, so she was at the VIP desk in a bouncy chair the following year, and our dog would come to the fair in Basel, generally because all our money was tied up in the fair and not in home care, and that tends to create a relaxed atmosphere! Also, most of the staff have been with us forever—Chris De Angelis (now Managing Director) started out interning at the first fair while he was still in university; Kerstin Herd (Project Manager) worked at my husband’s gallery in Germany—a lot of the team ironically call us “Mom and Dad”; we’re maybe only 15 years older but after having gone through a lot of their significant life moments together, we have doled out tons of advice and given support and are literally a family (I said it was corny!).

However big we get as a fair, we try to keep that feeling of familiarity: how we treat our co-workers, whether they are new permanent additions or interns, whether they are the Union guys at the Pier or an artist moonlighting as a sign manufacturer, and it definitely extends to how we treat our galleries and visitors. The fair was founded by galleries, so we all know what “the other side” is like and always make an effort to be sensitive to their needs and—even when they get cranky—think about things from their perspective. I also remember very well being a young art enthusiast, with $500 burning a hole in my pocket, and the people who were dismissive of me and those who took their time to share their passion… obviously I’d rather that VOLTA is the place that is remembered for being encouraging and open rather than exclusive and highfalutin. We abide by Kendrick Lamar’s advice “Sit Down, be Humble.”

AZ: Best piece of advice you ever received?

AZ: Given our political landscape and the #timesup movement, how we can champion and promote the advancement of young women in the art world?

AC: I know what you’re getting at, but I’m not sure young women need to be “championed” or “promoted” because it sounds like they need special help. They don’t; because we/they/women are super capable. Here I am being a little pedantic, but perhaps that’s one thing we can do, is to be more conscious of and conscientious with language and that goes for many instances, also to do with race, gender, etc. Maybe instead of “championed” we/women just need to be literally left alone, left in peace to be awesome and get the job done, to focus on work and not all that other noise. I bizarrely went to an all-boys’ school (long story); obviously that made me very tough, but I also have fabulous friends who are like my brothers. It’s really not us against them: it’s us with them so I don’t think it’s about treating any one person as more special or needy than the next person, it’s about being conscious of and respectful of differences while striving for total equality, and a lot of that can be done by creating a positive and supportive environment in the workplace.

AZ: How can we stay in touch?

The Most Popular Pose at Art Basel: The Back Selfie?