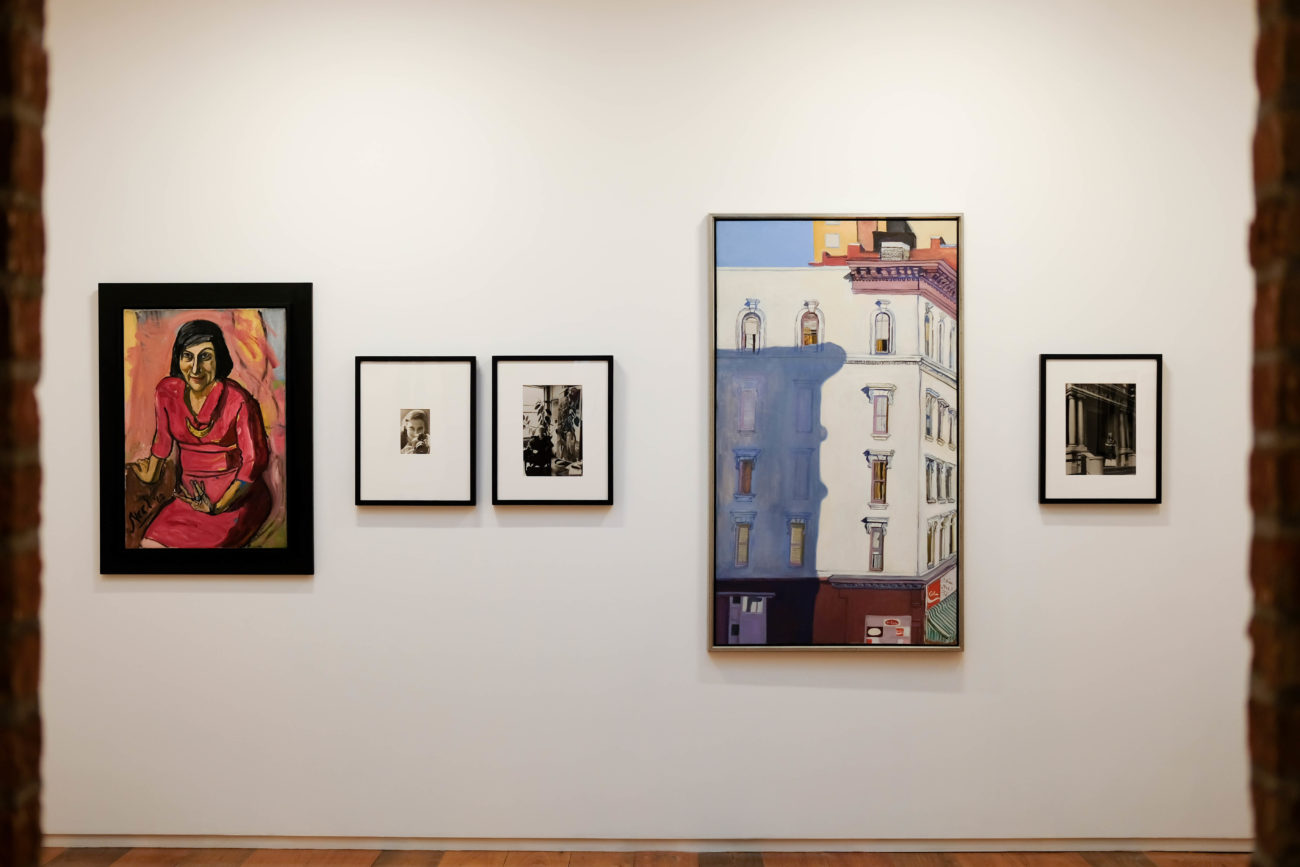 We would not ordinarily think of the art of Pablo Picasso and Alice Neel in the same thought. The brash and egotistical Spanish painter and the New York woman who painted intimate portraits of her friends and acquaintances as a pairing in the same exhibition? However, that is how gallery owner Sara Kay envisioned it and believe us it works and it works well.

From the minute, we walked into Sara Kay Gallery on East 2nd Street we felt a surprising sense of harmony amongst the artworks. The exhibition, Neel / Picasso, focuses on portraits painted by the two painters along with photographs by Lida Moser, a photojournalist who was friends with Alice Neel. One of the highlights of the show is Neel’s portrait of Moser from 1962. In the painting, Moser is seated wearing a red dress and a warm smile. The painting is hanging next to a photograph of Moser holding her Nikon 35 mm camera. Moser is wearing the same smile. As Sara Kay explains in the exhibition statement, “In Neel’s portrait of Lida Moser from 1962, Neel focuses on facial expression, body language, and clothing, illustrating the overlapping of inner essence and outward appearance, of vanity and vulnerability. Painted by her artist friend during the rise of the feminist movement, Moser was an accomplished photojournalist at a time when women were a rarity in the field.” We can clearly see how Neel caught her likeness and her personality in the portrait. Nearby is a “portrait” of the building that Neel spent many years living in at 107th St. and Broadway. The building was Neel’s last home. She described the dark shadow falling across the building as the “shadow of death.” The building still stands on the corner of 107th St.

Neel’s other portraits included in the exhibition are Michael dated 1981 and Dennis Florio 1978. Picasso and Neel were contemporaries, their careers overlapped chronologically. Picasso having lived until 1973 and Neel dying in 1984. Kay explains “Neel and Picasso were contemporaries who transformed and revitalized portraiture. Through select paintings by both artists, this exhibition offers a revealing parallel view of two key 20th-century painters.”

Picasso’s paintings hang dramatically on the walls of Kay’s gallery which is located on the ground floor of a townhouse on East 2nd St. The gallery has a large window facing 2nd St. and a skylight in the rear room allowing ample natural light to illuminate the gallery. It is rare to see Picasso’s paintings hung in a residential-like setting. We are accustomed to viewing Picassos in the sterile confines of major institutions. The exhibition includes Femme au béret orange et au col de fourrure, Picasso’s portrait of his young mistress Marie-Thérèse Walte and Homme assis les bras croisés II, a portrait of a young man that Picasso painted in 1964. Kay explains, “Picasso said that his work acted as a “sort of a diary.” Neel claimed she was “a collector of souls…” capturing “what the world has done [to her sitters] and their retaliation.” Linked in time, differing in approach, the parallel viewing of these two innovative 20th-century painters offers insights into both their artistic achievements and the radicalization of portraiture.”

Don’t miss the chance to see these two masters of portraiture with very distinct styles at Sara Kay Gallery through July 27th!

The Rise of Memes as an Art Form