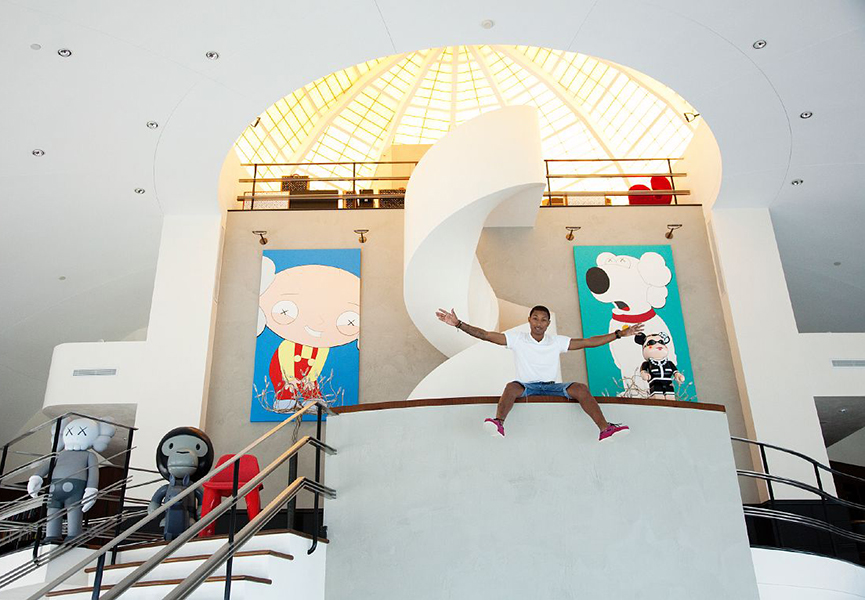 We all have those Hollywood actors, actresses, and musicians that we love, and we want to know all the gossip about their lives. It’s never enough to check out sites like TMZ or Perez Hilton, we want to get to know what they’re up to outside of the spotlight and most importantly what artwork they like.  If you fangirl over celebrities it’s time to know what art your favorite celebs love to collect.

Take a look at these five Hollywood stars and the artwork they have in their collections.

He has an eye for beauty. Leo, our Wolf of Wall Street has delved into the art collecting game with big name paintings. From grand paintings, to vintage movie posters and prints, Leo knows his artwork. As you can imagine, being a fervid advocate of environmental awareness and protection, DiCaprio has collected elaborate paintings of nature like The Tigress by Walton Ford and Ocean V by Andreas Gursky. Leo is a big fan of Jean-Michel Basquiat, Ed Ruscha, Frank Stella, Takashi Murakami and the work of cartoonists Robert Williams and Robert Crumb. The actor even posed for Elizabeth Peyton in a portrait she painted of him, and it’s safe to say he’s a stud on and off the canvas.

He’s one of the legends from Cheech & Chong! Cheech Marin discovered and took a liking to Chicano paintings at a young age and took the initiative to start his collection. In the 60’s he bought paintings that related to him and his life and the actor’s collection has flourished since then. The Californian native wants to bring Chicano art into the mainstream with artists like Ester Hernández, Carlos Almaraz, Margaret García and Carmen Lomas Garza that are featured in his collection. Cheech Marin now has one of the world’s largest collections of Chicano art, so we think we could call him an expert at this point.

The Rocket Man himself, not just a musician but a true art collector since the 90s. Elton John has a collection including paintings, sculptures, prints, photographs, you name it. From Robert Mapplethorpe, Man Ray, Wang Guangyi, Keith Haring, David LaChapelle, these are just some of the names that make up his art collection.

Did you know during the 80’s, Madonna was a struggling artist in the Lower East Side? The queen was and still is an admirer of Frida Kahlo’s work, and her collection includes Self Portrait with Monkey from 1940. Frida Kahlo is among artists like Picasso, Marilyn Minter, Man Ray, Tamara de Lempicka, and Fernand Legér that make up Madonna’s extensive art collection that she began in 1987.

No wonder why Pharrell is so happy, the artist has an entire house in Miami full of artwork. His vast art collection includes the works of contemporary sculptors and painters like Takashi Murakami and Kaws, Keith Haring and Daniel Arsham. It doesn’t end there; Pharrell owns a collection of over 700 Art Toys that were displayed at the Design Exchange in Toronto.