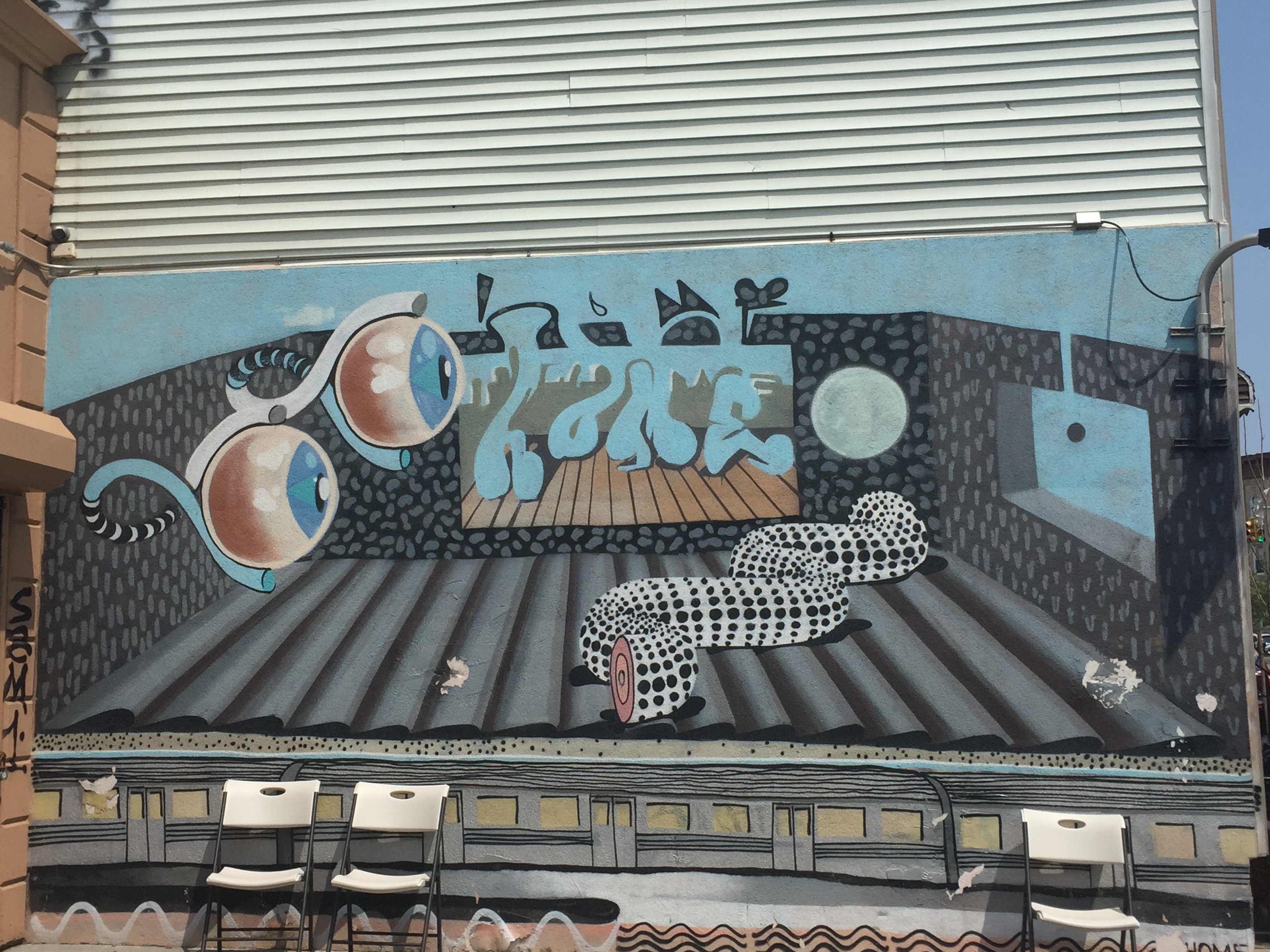 There are murals all over New York City, in fact, there are murals all over the world, however these murals pale when displayed next to the mural that takes up one-third of the back side wall of an apartment building in Greenpoint, Brooklyn. Just outside the exit of Greenpoint Car Wash, over on McGuiness and Engert, sits a hidden gem of the Brooklyn art world, a mural by graffiti artist Home.

What makes this mural so top notch? It’s a modern surrealist vision. Its subjects, skillful artistry, its ability to draw the eye towards itself, and just plain strangeness, are all reasons this particular work of wall art stands out among the crowd (which is pretty hard to do when there is a massive mural of Bruce Lee just down the road on Driggs and North 8th street).

The overall picture: what appears to be a room that has no roof, with a window that looks out onto nothing (or perhaps just the clear blue sky), a set of disembodied eyes peering off out the window, a white and black polka dotted snake, that has no head and which disappears into the wall, as well there is a moon on the wall just above where the snake hits the wall, and large square painting-within-a-painting that displays the word HOME. Below the room, there is a floor like a tin roof, is a layer of what looks like dirt, and just below that is a train passing underneath the room.

What makes this interesting is the perspective from which it is viewed. It is a downward perspective, as if you’re looking at it from above. We only see a view of three of the four walls of the room, yet we see a straight on perspective of a train passing by underneath the room. With two completely conflicting perspectives, they ultimately compliment one another and we’re into it.

Next is the idea of “home,” is this the artist’s home? Does this home belong to the pair of floating eyeballs? Is it the headless snake’s home? It is uncertain. What is certain though is that many ideas can be extrapolated from this. The idea that it is a broken home, as the cut up snakes is reminiscent of the “Don’t Tread on Me” flag flown during the war for American independence from the British, only now the snake is without a head for good. Next, we have the eyes. Are they outside looking in, or inside looking out? Perhaps it is a scene of voyeurism we’re watching, or perhaps it is a comment on our culture’s obsession with surveillance, centered explicitly around broken images. The window; a way out, a way in, another perspective of the world that shows what life can be. And what about the train? It can be viewed as simply a literal scene of another apartment above a busy commuter system, or is it a metaphor for the fast-paced way in which we move from place to place always keeping tabs on what is going on with people, whether you know them or not.

Lastly, the moon. Often seen as a symbol for women, but also as the light that illuminates the mischievous deeds done in the dark. Is the moon a way of saying we need to shine a bright light on how we are behaving as a society? Possibly. It is for these reasons, and these unfinished loose-ends that this mural is a master work. It is something that challenges any work of Dali’s. This mural is provocative and insightful, so when you get a chance, go check it out and stand in front of it for awhile like we did. Bring snacks

Tunes That Will Get You Psyched for Art Basel Miami 2017