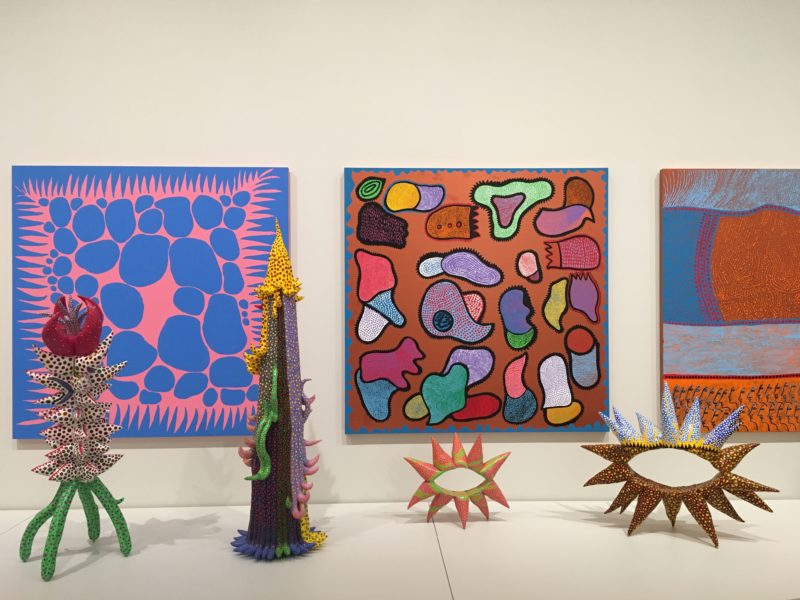 “Our earth is only one polka dot among a million stars in the cosmos.”

Yayoi Kusama is undoubtedly the most talked about artist this year. In the last month, Infinity Mirrors landed at The Broad in Los Angeles after stints in Washington, D.C. and Seattle, Life is the Heart of a Rainbow opens Saturday at the Queensland Art Gallery in Brisbane and new works were unveiled at David Zwirner in New York. From art world aficionados to the selfie-obsessed, thousands of people are lining up to get an infinity room-selfie on their content calendars.

Hype aside, Kusama is an inspiration. Her dedication to repetition and devotion to the simple, yet complex shape of a dot is outstanding and immersive, no matter the medium. Her determination to give viewers experiences is limitless and it all began with her Accumulations – plush, phallus-like sculptures she created in the early 1960s to overcome her fear of sex. Attached to objects such as chairs and ladders, she eventually used the sculptures to create Phalli’s Field in 1965, her first infinity room.

Since then, Kusama has created over 20 different rooms, both large and small. Aftermath of Obliteration of Eternity, a work she created in 2009, the year of her 80th birthday, reflects flickering gold lanterns inspired by the traditional Japanese ceremony toro nagashi. The ceremony is meant to guide spirits down a river, back to their eternal resting places. Love Infinity, on the other hand, invites viewers to peer inside a large box or “machine for animation” as she called it in 1966. The light patterns, colors and bulbs of this environment are reminiscent of Time Square. When the work first debuted at Castellane Gallery in New York, Kusama handed out “Love Forever” buttons, which to her symbolized antiwar, sexual liberation and civil rights.

Also eye-catching are Kusama’s intimate collages. The least recognized of her works, the collages were created in the early 1970s as a homage to her close friend, and perhaps romantic partner, Joseph Cornell. Known for his assemblage, Cornell often used found objects to create shadow boxes filled with curiosity. When Kusama moved back to Japan, she created these collages of birds, butterflies and snakes in Cornell’s style to re-emerge in the Japanese art world and honor his memory. In 1975, Kusama featured 35 of these collages at her first solo exhibition since her return to Japan.

Walking through Infinity Mirrors at The Broad you notice the expansiveness of Kusama’s oeuvre. The patterns and shapes come to life in a dream-like sequence, and you can truly feel the artist in each work. Every detail builds off of the last, and you obtain a deeper understanding of her evolution as an artist and the techniques she developed to emphasize the hallucinatory effects of her work. The fact that Kusama created these mirrored environments pre-art selfie is a testament to her remarkable ability to engage her audience.

Yayoi Kusama: Infinity Mirrors is on view at The Broad Museum through January 1, 2018.

6 Art Fairs to Look Forward to This Winter