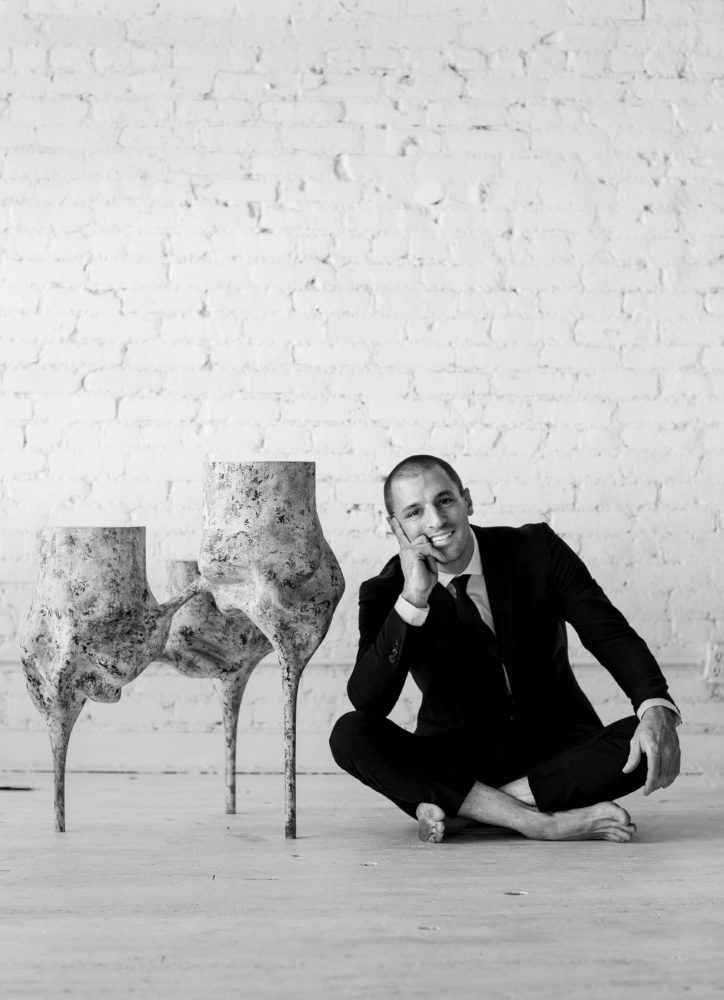 The American born artist, and one-time architect, Vincent Pocsik recently unveiled his newest series of sculptures, titled Works Of Sculpture 33 (part of his “One The Meridian” Series), in an exhibition at the progressive FF-1051 Gallery in Los Angeles, curated by its founder and owner Holly Purcell. Featuring works inspired by the artist’s recent residency with “Long ago, Far Away” in Omaha, Nebraska, Works Of Sculpture 33 is “an ongoing exploration of my earlier beginnings as a sculptor. I am continually investigating the form, structure, and function of contemporary traditional furniture versus an avant-garde style of sculpting with wood and Bronze.”

Works Of Sculpture 33, which Pocsik also says is somewhat “inspired by my fascination with Michelangelo’s Slaves sculptures,” plays with the geometric juxtaposition of form and figure, whereas form is nature or the natural state of the materials utilized, and figure is the culture of our times.  The mesmerizing, other-worldly sculptures within Works Of Sculpture 33 are highly detailed and intricately carved creatures, seemingly emerging as life-like formations and each with its own characteristic and identity.

Art Zealous sat down with the Los Angeles-based artist to discuss his career and learn more about Works Of Sculpture 33.

Art Zealous: You began your career in the industry as an architect. Describe your journey to becoming a sculptor and furniture designer?

Vincent Pocsik: My journey as a sculptor and furniture designer really started before architecture.  I grew up in a blue-collar family, so working with your hands was ingrained in me from a young age.  I believe that the ability to create with your hands relies a lot on your ability to understand through the feeling that is coming from your hands.  This is a connection between your brain and heart that I think can be nourished through generations, and I was lucky enough to have this passed to me. I did understand though that I needed develop other skills, which is what led me to architecture where I was able to study design principles and nourish my own formal sensibilities. Shortly after leaving graduate school, I understood that I needed to combine both my innate skills with what I had studied. The natural choice for me was to go into sculpture and furniture design from there.

AZ: Is there a piece you have designed that you consider the most challenging of your career so far?

VP: I am always striving for my most recent piece to be my most challenging.  In this case, it was Chairlamp which was shown recently. This piece brings together many techniques and formal ideas that I have been working on for several years.  It is also fairly larger, which makes things naturally a bit more complicated.

AZ: You seem to experiment a great deal with wood. Are there any other materials which you find you are most drawn to, and why?

VP: Wood is certainly my number one material and something that I seem to be able to understand the greatest.  Beyond wood though, I really enjoy working with both bronze and stone. I always imagine my pieces being dug up centuries from now; this is a practice to make sure I am also not just working towards trends.  The fact is though that bronze and stone have a better chance of making this journey which is a nice thought to have.

AZ: In your recent Works Of Sculpture 33 exhibition at FF-1051 Gallery, each of your sculptures seem to carry a breath and life of their own. Do you find sculpting each piece an idea in which you have full control as you work, or does it become a journey with the piece as you carve. If so, how?

VP: I do always start out with a character in my mind, this is mostly for my own inspiration and to push me forward with the piece.  I do this with the understanding that that character will change during the creation of the piece. I think that each material carries its own energy with it. I believe that when a person works on something they add their own energy to it. These two energies coming together is what breathes life into each piece.  It is impossible to predict what exactly that character will be like, but you can, of course, guide it on the journey. The final result I think is something that comes through on a visceral level, but may not be fully understood to the viewer’s brain.

AZ: What artist or designer would you say has influenced your career the most?

VP:There are really so many that I feel it would be doing an injustice to single one person out.  If I had to be put against the wall though, I would say Berlinde de Bruyckere’s work has had a fairly large impact on me.  There is such a strong understanding of life in her work. Whenever I look at it, it pushes me to strive even to have an ounce of that in my own.

AZ: You recently had a residency with Long ago, Far Away in Omaha, Nebraska. What did you find most crucial about your time there, and how do you think it has affected your work as a designer?

VP: The most crucial thing about my time there was that it was my first time really working hand to material.  Meaning I did not plan what was going to come from each piece; instead I let the material and my instincts guide me along with way.  The material itself had such a rich story, it was almost impossible for it to not create something wonderful. I really came away from that experience with a new trust in myself and what I am capable of.

AZ: Where do you find inspiration when beginning a sculpture?

VP: I am obsessed with both anatomy (human and animal) and nature (mostly trees and water).  As I go through life, I am constantly collecting moments in both my head and digitally to reference later.

AZ: Your “On The Meridian” series is an ongoing exploration and investigation of form with function, and figure. Tell us about a bit more about this.

VP: On the Meridian is inspired by the idea of empathy. Empathy to me requires sitting on the border, rather than being on either side of it. In this case, on one side there is figuration and art, and on the other side there is pure geometric form and function.  The work tries to sit on the wall between these, recognizing the differences but knowing there is no need to choose a side.  I am always using that idea to create the work so it can have an emotion and a logic at the same time.

AZ: What is it about these three elements that continually forces you to investigate them?

VP: It’s really two elements to me: figuration and pure geometric form.  The function is an element within the geometry.

I believe that pure geometry is godly, there is a truth that lies within it which cannot be argued.  This is the same for function, either it works functionally or it does not. This is why these two are on the same side as each other. Figural form is more complex and sensual.  It is rooted in humanity and there is no correct answer to it and an infinite number of representations of it. This to me is also what art is. I think when you combine these two things there are endless possibilities. I suppose this is what forces me to explore continually.  I am always searching for how each can be played perfectly with one another.

AZ: What is next for you?

VP: I am currently continuing the work for the On the Meridian series and preparing for a show at the A+D Museum in Los Angeles.

VP: I think this is actually the heaviest of them all. To Be!