Chances are that during your morning instagram and art news roundups, you’ve seen images of Michael Pybus’ indoor Pikachu garden. Pybus’ In 3D the basil never wilts, is comprised entirely of IKEA products and soft toys in the form of Pikachu – a character Pybus has continually worked with and sampled for over a decade. He utilizes Pikachu, in part as an icon of consumerist thirst, engineered never to be fully quenched.

Funny enough, the title of the work comes from an IKEA article about their increasing use of CGI in their catalogs –75% of which is computer generated imagery. The company are quoted saying ‘In 3D the basil never wilts’ referencing the fact that creating their products virtually reduces the huge costs associated with merchandising the physical items for their print media.

We caught up with Pybus to discuss his obsessions, consumerism and what’s next for him.

Art Zealous: Tell us a bit about yourself. Where are you from and what’s your artistic background?

Michael Pybus: I’m from a little town in Northeast England called Darlington. It’s claim to fame is it was the place where the first public steam train line ran. It wasn’t a very cultural environment to grow up in, and art wasn’t part of my upbringing, but ever since I was a kid I’d always made things. No one really knew what to do with this drive, at school I was always told I should be a designer or architect, something like that, but those professions didn’t interest me. I have always been more focused on narrative and fantasy (looking back I guess I was looking to escape). I was never drawn to the practical constraints of designing a building or product.

One evening in my mid-teens and totally by chance, I put the TV on and there was some loud woman on this show and she caught my attention. Turned out that woman was Tracey Emin and the program was about that year’s Turner Prize of which she was one of the nominees. That was the evidence I had seen that you can be an artist in the real world, it’s not just some paper fantasy. Emin had a “fuck you” confidence and a voice that spoke her truth. From that moment on I understood that was to be my direction in life. A couple of years later, I moved to London to study art at Goldsmiths followed by an MA in sculpture at the Royal College of Art. So I guess in a nutshell that’s kind of how I fell into the world of art.

AZ: Your work is obviously about consumerism to some extent. How do you view consumerism’s role in our daily lives and why is it important to make art about it?

MP: I think we live in a very binary culture at the moment where something/one is either good or bad, but I’m approaching consumerism from a more nuanced perspective. I believe it has played a crucial role in improving many lives – I don’t want to live in a world without modern medicine, airplanes and supermarkets. It has also played a crucial part in psychologically manipulating us all and causing much devastation to the planet. As an artist I celebrate consumerism as a medium I can ‘sculpt’ and re-narrate to communicate my take on the world, to explore what it means to be a person making art at this very moment.

Consumerism doesn’t just play a role in our daily lives; it is our daily lives. Our entire existence in the developed world wholly revolves and depends on it (and those in the developing world are hugely shaped and controlled by our needs and whims). From birth we are encouraged, (forced?) to define ourselves through what we buy, how we wear and display it and now through social media how we project our consumer choices and desire into the world globally. It’s a system I find both fascinating and terrifying, a fertile ground for me to explore.

AZ: Your Pikachu Orchid Garden installation deals with two very specific and globally recognized brands: Pokémon and Ikea. Why these brands and what, if anything, do they have to do with each other?

MP: A few years ago I was feeling pretty disconnected from the art world, and unsure what direction I was expected to go in. Then I had a moment where I admitted to myself no one was really paying attention to what I was doing and instead of feeling depressed I felt totally empowered. If no one was looking then I was totally free to do whatever the fuck I wanted. So instead of trying to make work that looked like art I thought people were wanting, I choose to go all in and filter imagery and narratives which reflected my own personal experiences and taste, dropping any worries about style or coolness.

It’s hard to explain this to someone born in the 21st Century, but before all access information was normal, something like an IKEA catalog could provide a lot of inspiration to a kid like me growing up in a little Northern village with very little to look at or do. IKEA’s bright colors and bold geometric designs had a strong effect on my artistic direction and interests and I have always felt an affinity to the brand and its outlook.

I didn’t play Pokémon growing up but my little sister did. I loved the idea of adventure and how you collected these cute little colorful animals. I didn’t grow up in a very abundant environment and developed an interest in scavenging and collecting just about anything I could get my hands on, the Pokémon franchise struck a chord with me in that regard.

So that’s the personal relationship with these two brands and by channeling them through my work they allow me to approach the viral nature of globalization that affects us all. The same objects, ideas and desires are repeated endlessly throughout the world, with little regard of localized culture and how as a society we have fully embraced this direction. I wouldn’t say I’m necessarily coming from a place of critique (I benefit greatly from globalization) I’m more interested in exploring the rhythm and scaffolding around such a system and the challenge of using mass market brands to express my personal experience. 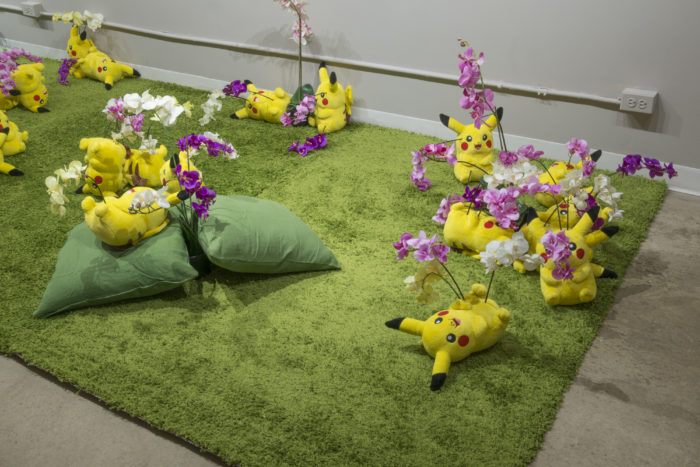 AZ: You’ve also included work by other artists in this show at Castor Gallery. How did you select this work and what relationship does it have to your installation piece on the floor?

MP: Curation plays an integral part in my practice, I like to utilize it to extend my network and to give other artists opportunities to get their work out into the world. It’s a great way to connect with others and introduce new narratives into my practice. I ran a gallery in my studio/home called WELCOME SCREEN for a couple of years, where I hosted 18 exhibitions over two years by artists most of which had never shown in the UK or Europe. After a couple of years, my own practice became too time and space consuming, so I closed the gallery and had to focus on my work. I have continued with that curatorial storyline and often include other artists work in my exhibitions. I’m never too concerned with direct relationships between my work and the artists I ask to participate in shows, for me it’s more exciting to throw things together and see what comes from it.

I’m in LA right now as I type this. It’s my first time here, and this city embodies that ‘fuck it let’s throw it together’ sentiment in a way I have never experienced. I find it amazing to see a mock Tudor building next to a Spanish Hacienda and then next to a Brutalist concrete structure. It’s like nothing I have ever seen in Europe, and I’m soaking as much of it up as possible.

AZ: What do you hope visitors will take away from their experience seeing and interacting with your work in In 3D the basil never wilts?

For me, whether someone likes or dislikes my work is not a primary concern, but when people experience my work it’s important to me that they can understand it was made by someone who is passionate about what they do and say. From that, I would hope to encourage people to be able to express their own experiences and perspectives in whatever they do. (and on a totally egotistical level I hope that next time they see IKEA or Pikachu they think of Michael Pybus!)

AZ: Favorite thing you did during this trip to New York?

MP: I didn’t go to NYC for the show as it happened to co-inside exactly with the time I was traveling to do a residency in LA at Danny First’s La Brea studio. Thanks to email and the great team at Castor Gallery we were able to coordinate everything and everyone without any trouble.

MP: Well as I mentioned I wasn’t there, but as I sit here in the Californian sunshine, I’m going to take a guess that if I was there my least favorite thing would have been that freezing cold blizzard. 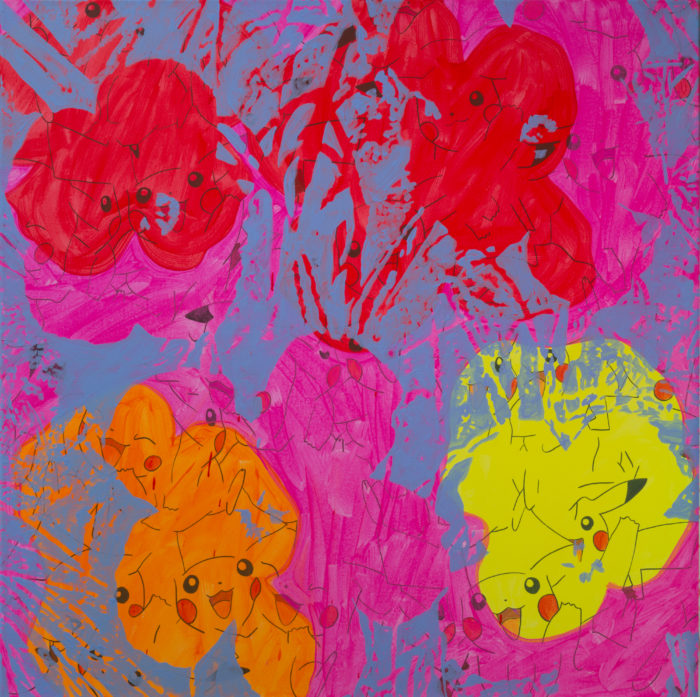 AZ: What’s next for you?

MP: I have spent the past few weeks here in LA repainting David Hockney’s 1960’s LA paintings – remixing them with new iconographies such as Lara Croft and Pikachu. These new works will be up at The Cabin LA opening March 26th. I will follow that with a large exhibition of painting, installation and video at The Depart Foundation opening April 13th. I have a solo presentation of painting and sculpture with Tatjana Pieters Gallery at Independent Brussels 19-23 April. Following the Depart show, I will fly to Houston for my show HIVE MIND at Jonathan Hopson Gallery opening April 23rd which is my birthday, so a great start to my 35th year on this planet. There’s also a solo at Amor Mexico City too. Then when I get back to the UK, I’m straight into the studio to get working on new paintings and sculpture for a solo at Thierry Goldberg in NYC opening in June.

MP: I have my website www.michaelpybus.com and I’m a heavy Instagram user so if anyone feels the need to OD on the shit I see day to day I’m @michaelpybus.

all images // courtesy of Castor Gallery