We’re excited to announce that our friends Future Retrieval opened their first solo exhibition with Denny Gallery in NYC entitled Permanent Spectacle. Dynamic duo, Guy Michael Davis and Katie Parker, spent the past year in their studio working on Permanent Spectacle, which was first shown at the Fuller Craft Museum in Brockton, MA this spring. The pair worked with the Fuller Craft Museum and Denny Gallery to develop the project and tailor the installation for two very different spaces. They did this by drawing on a variety of processes, media, and technologies to create highly detailed work. The goal was to expand on their art, a practice that mines the past to re-imagine historical events and landscapes to make them resonate in the present day.

“The inspiration was to reexamine the way decorative objects are typically presented through re-envisioning exhibition and display,” Future Retrieval said. “We wanted an immersive tableaux – a natural history diorama mixed with a period room. We were pulling from expeditions, researchers, and landscapes in both our individual research, altering the materials selected with digital processes and hand cut paper. We wanted to create an atmosphere in which our work can not only be looked at but experienced.” 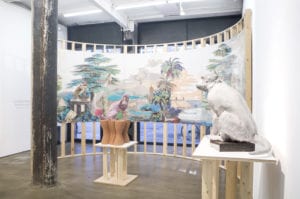 Permanent Spectacle is the result of a year long research project that Davis and Parker undertook at the Smithsonian archives at the National Museum of Natural History and the Cooper Hewitt National Design Museum respectively.  Parker’s advisers happened to be an objects conservator, a wall coverings curator, and a librarian at Cooper Hewitt, so she spent two weeks working alongside each of them. During that time, she gathered images of Meissen figurines for photogrammetry and 3D scanning, hundreds of images of wallpaper, and notes and scans from books on period rooms, patterning, and porcelain factories – while Davis worked primarily within the division of mammals at the NMNH, but also included anthropology and the division of birds. He worked closely with the Office of Digitization and had access to the collections to scan taxidermy and ethnographic objects. He initially focused on the great expeditions that contributed to the initial Smithsonian collections, but also found a plethora of interesting taxidermy forms that related to the aesthetic the duo had developed as Future Retrieval. 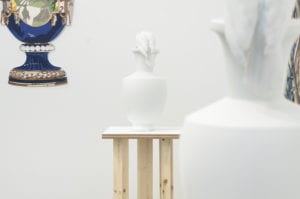 Using the material they gathered through their research, Future Retrieval created a constructed landscape that references idealized environments filled with wildlife, set against scenic, block printed wallpaper recreated through hand-cut paper. Basically, they took the images and objects sourced from the Smithsonian collections and completely reordered them – which is fascinating. In Permanent Spectacle, the background of the diorama is sourced from pieces of Zuber’s El Dorado block printed landscape scenic – but rearranged with Davis’ taxidermy animals inserted into the scene with all the original figures removed. The pair was thinking of Thomas Cole’s Course of Empire paintings and developed a scene that references his final panel, Desolation. Davis & Parker were looking at these great landscapes and vistas of the world made into wallpaper, and thinking about what happens when nature takes over again.

“The theme of the project is exploration. The background mural represents the continents of the world, while the animals represent a diverse collection of specimens. The theme is the Smithsonian, it is about the expeditions, collections, storage, documentation of objects from numerous lands and cultures, and the creation of an institution. We explored a small section of what is available, and then remade and rehoused our finds, exhibiting a fraction of our experience. We chose to exhibit this as a cycloramic display that hints at institutional dioramas,” Future Retrieval explained. 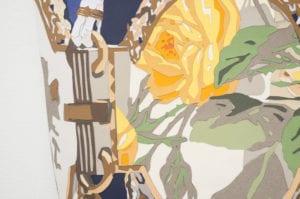 The resulting tableau is an elaborate and intricate modern-day period room, a fantastical world filled with artifacts, which re-examines the way decorative objects are typically presented. Future Retrieval successfully removed objects and decontextualized them from their original setting, and placed into a museum collection – usually within a vault or case or display. The goal was to remove them one step further, and create an entirely new world of presentation. 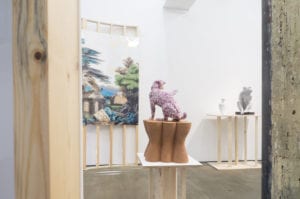 The work takes the shape of a curved, cycloramic display that mimics a diorama that one might find at a natural history museum. The hand-cut landscape wallpaper, based on patterning from the 1800s, has been redone to erase any trace of human presence. Displayed on pedestals in front of and around the backdrop are porcelain wildlife specimens culled from the Smithsonian’s collection from notable U.S. exploring expeditions and surveys. 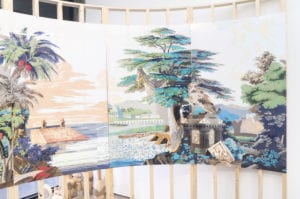 This project was almost exactly one year in the making, and involved a lot of labor and processes – from ceramic slip-casting and mold making, hand cutting paper, and woodworking, to 3D scanning and printing. The labor is what Future Retrieval values most and these objects in the exhibition have been examined, held, photographed or patterned on every square inch. The time that it took to do this work partly came along with their material choices- when they employ technology and digital processes, they try to offset that with an absurd amount of hand labor. There is a lot of push and pull in their studio, a search for perfection in form (Davis) and an obliteration of surface (Parker). That back and forth is what keeps the duo motivated. 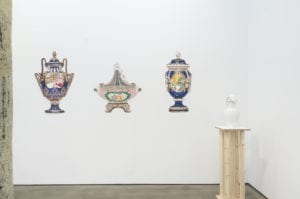 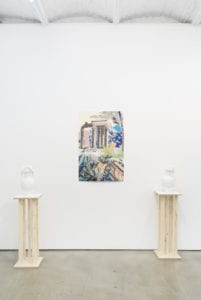 “With the increasing digitization of design, texture and ornament have receded and lost some of their artistic aura, which the physicality of craft can restore,” said Future Retrieval. “Our goal is to re-contextualize, compose, alter, and ornament both form and backgrounds to bring the objects we love into a 21st Century dialogue with history.” Drawing inspiration from museums, collections, and history, Future Retrieval seeks out things that they marvel at, using them as a chance to test their skills, always seeking the nearly unattainable. 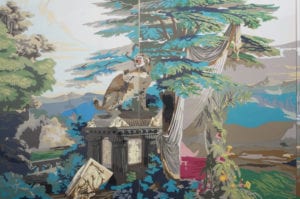 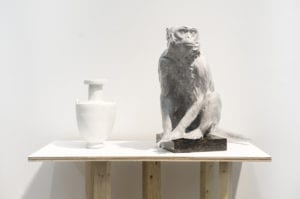 The Beginners Guide to Making the Most Out of Your Studio

8 Artworks We’ve Got Our Eye on at AIPAD