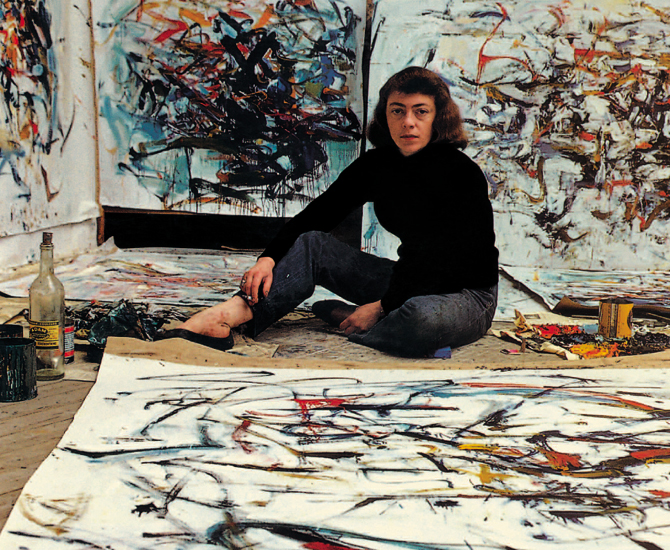 Standing in front of a painting by Joan Mitchell is viscerally transcendent. From the largeness of her canvases, to the impassioned, violent brushwork, the vibrational content of the composition is as compelling, hypnotic, and stimulating as the color, dimension, and movement of her works. Joan was born on February 12th, 1925 to a well-to-do family in Chicago, IL. Her mother, Marion Strobel Mitchell, was a founding editor of Poetry magazine, one of the U.S.’s most seminally important journals of verse, and her father was a prominent doctor. High-society hopes were pinned on Joan from birth, but Joan, emphatically, had other ideas.

I’ve been mad for Abstract Expressionism since my late teens—when I discovered it, I was immediately captivated by these over-sized canvases that seemed to seethe with pure emotion, devoid of recognizable content. I’m sure this has something to do with my own Neptunian leanings, but to me, these paintings were like poems, blown up and blooming. And indeed, the movement, or group, had its own poets affiliated—Frank O’Hara, John Ashbery, James Schuyler, Kenneth Koch, and Barbara Guest shared space and spanned time with the likes of Willem and Elaine de Kooning, Helen Frankenthaler, Jackson Pollock, Lee Krasner, and many others.

Though the abstract expressionist painters are known for their radical departure from representational painting, Joan’s work was different from that of others of her cohort. More complicated yet spare, more divinely guided, more visceral, more poetic, more human. I posit that with her North Node in Leo conjunct Neptune, the planet of fantasy, merge, and escapism, Joan was drawn forward to blend solar self-expression with a Neptunian, painterly dissolution of form. Armed with her Libra Moon in the 12th House, chart ruler Venus, Sun in Aquarius, and South Node in the 4th House of ancestral echo, Mitchell was an artist who sought to purge past-life energetics via a radical approach to both painting and self-expression. Let’s take a look at her chart.

Born in Chicago at 10:31 pm CST on February 12th, 1925, Joan is a solar Aquarius with a Moon in Libra, and Libra on the ascendant. Immediately, we see that intellectual exploration and theoretical experimentation were crucial for Joan—the element of air (Libra and Aquarius being air signs) is affiliated with the workings of the rational mind. Her chart ruler, Venus, sits at 6° Aquarius conjunct Mercury in the 4th House, conjunct her imum coeli, the angle of home, family, and ancestry. As the head of a t-square, this is a supercharged chart ruler, as Venus receives tension from Mars as well as Saturn, drawing in themes of libidinal passion (Mars) as well as pressure from patriarchal or otherwise forbidding male figures in her life (Saturn).

One of the key struggles of Joan’s adolescence was trying to find a way to first please, and then ultimately escape, the immensely heavy burden of her father’s expectations. Family myth holds that Jimmy Mitchell desperately wanted a son, and since Joan was not able to deliver on that front, he took very little interest in the cultivation of her early life. As she matured, her father began to enact immense pressure on her to excel in all aspects of life, from athletics to academics to art. This likely instilled in Joan a competitive, fierce disposition. But Joan’s father was cruel, uncompromising, and contemptuous of anything he deemed antithetical to excellence. The presence of Saturn in the 1st House may also speak to her father’s insistence that she live according to his will.

In a letter to her partner Barney Rossett, Joan once wrote “Maybe someday in the brave new world they’ll sell self-confidence in bottles” (Gabriel 379). A classic expression of Saturn, planet of restriction, in the house of “self” is the lifelong struggle to find confidence and clarity of vision, especially around matters of individuation. There is often some structural or societal influence that interferes, and the native must fight their way through the rigidity of Saturn’s rejecting gaze to find grace and growth for themselves.

Joan’s Sun in Aquarius sits at the 23rd degree in House 4, just like her chart ruler Venus, and it is the ruler of her midheaven, angle of fame. The 4th House contends mainly with themes of home, family, ancestry, and the divine feminine, or mothering capacity. As the 4th House is associated with the sign Cancer, I’d venture to say that although it’s not explicitly a house of “art,” there is a great deal of sensory care, textural and environmental sensitivity, that emanates from a placement like this. Located in the sign Aquarius, Joan’s solar ego shines best as a visionary force. She’s the inventor who seeks to revitalize the world through their ideals, and to unify people for a more utopian future. Ab-ex painting was not only cutting edge for its time, it was indeed futural, seeking to completely abandon representation. Sitting at the 23rd degree, the degree associated with Aquarius, this visionary quality is amplified.

As the ruler of her midheaven, Joan’s Sun functions in the 4th House, that house of visceral and womblike material, on behalf of the 10th House, the house of reputation. She brings the wide world into the private realm of her solar perspective. Her Sun also receives dreamy pressure and stimulation from Neptune, which opposes her Sun. This aspect can bring confusion and misdirected energies—and Joan certainly had her fair share of false starts and misconceptions about herself and the direction of her life. But I’d also like to posit that this is one of the aspects that inspires Joan, especially as Neptune is conjunct her North Node of fate. Both Neptune and her North Node are in Leo, the sign of the artist who expresses their singular vision. This aligns well with the notion of Joan as an ab-ex artist, as this style of painting required a highly individualist stance toward image-making.

Joan’s Moon shimmers with the magical Venusian energy of dreams, situated as it is in the 12th House, at 13° Libra. It is also an energetic focal point in the chart, the head of a t-square like her chart ruler Venus, only this time the Moon is squared by Pluto, planet of karmic transformation, and Jupiter, planet of expansion and excess. To say that there was pressure on her emotional core to not only self-immolate and be reborn throughout her life, but to be restless in her search for a far horizon, is putting it lightly. This is a high voltage aspect pattern for our painter.

The Moon is the luminary of emotional needs, and describes to us many details about our childhood, our feelings, and our private self. With her Moon in Libra, Joan’s emotions are filtered through her intellect, situated in the airy sign of the scales, and prone to a touch of deliberation or indecision, which can sometimes lapse into fierce displays of emotional explosiveness. With this said, her emotions are attuned to things of beauty, with her Moon in Venus-ruled Libra, the sign of harmony and aesthetic balance. Certainly a helpful placement for a painter of any style.

Special attention must be paid, however, to the Moon in House 12, the house where shadow lives, the house of hidden places, secrets, and dreams. In the 12th House, we merge with the collective, we find trappings of healing and addiction, loss of boundary and the divine. Individuals with their Moon in the 12th require so much time to themselves, as the Moon’s placement describes what we need in order to feel safe. The meditative quality of her work stems from the placement of the Moon in the 12th, indicative to us of an individual who needed to retreat in order to make her art. Moon in 12 also points to a troubled relationship with the mother, as well as addictive tendencies—a penchant for escapism. Joan’s alcoholism was her most serious vice, and contributed to much of the chaos of her life. This, however, is the least interesting component of this placement. Who am I to deny an artist her fancy? Joan was unstoppable in her creative pursuits, and her Moon at the 13th degree, the degree associated with Aries, shows us that she was individualistic, fierce, and pioneering, and that it all emanated from this very sacred, almost divine, place within her core.

We can see that her North Node in Leo (13°) was conjunct her natal Neptune in House 10, with her South Node in Aquarius conjunct her natal Mercury and Sun in the 4th House. This tells us the story of an individual who is destined to move forward on an individualistic path (Leo North Node), which is both public (House 10), and creative (conjunct Neptune), but that there is a principal struggle of individuation that must be battled with care. The Sun conjunct the South Node suggests that Joan’s karmic past life energy accumulated around her Sun, her sense of “self.” Dominated as she was by her family’s expectations of her, Joan did have a difficult time figuring out how to liberate herself from House 4, the house of ancestry, and launch herself into the public path she was meant to tread.

Making matters more complicated is the fact that her North Node ruler is the Sun, which is conjunct her South Node. The ruler of her South Node is Uranus in House 5, the house of self-expression. And so we see that there is a tremendous amount of energy that pulls Joan into a past-life energetic orientation. She had to fight to escape and find freedom. Helping bridge the gap, perhaps, is her Mars in Taurus in House 7, which we could see as her strong and steadfast husband Barney Rossett, who supported Joan emotionally, intellectually, and financially through the early and mid part of her career (they divorced in 1952).

For Joan, the essence of “selfhood” comes through in the act of painting, something that had nothing to do with her father’s desires for her to be a member of upper-crust Chicago society. Oftentimes living in squalor, and in unusual company, Joan broke away from her family to complete the North Node task of finding freedom through art, which is suggested by her North Node’s placement conjunct Neptune. Neptune is certainly the most “ab-ex” planet, concerned as it is with the dissolution of boundary, and the reliance on intuition to make a painting devoid of content hum with musical tension.  It’s important too, to remember that Neptune is the ruler of her 5th House, the house we associate with spontaneous, creative acts. The artist herself once stated, “My paintings repeat a feeling about Lake Michigan, or water, or fields… it’s more like a poem… and that’s what I want to paint.”

Cristina Farella is a counseling astrologer and writer located in Eugene, OR. She is at work on a scholarly research project about planetary influence on blood and emotions in Shakespeare’s Winter’s Tale. Other words by Cristina can be found at Brooklyn Rail, Medium, Literary Hub and Spolia. She is the astrologer for the upcoming Celestial Bodies Oracle, due out this year. Follow her at @eighthhouseastro on Instagram for daily planetary updates, or connect with her here to learn about your own stars.

All images sourced from the Joan Mitchell Foundation, as is the quote that ends this article.

5 Art Events to Check Out in the Hamptons This Weekend