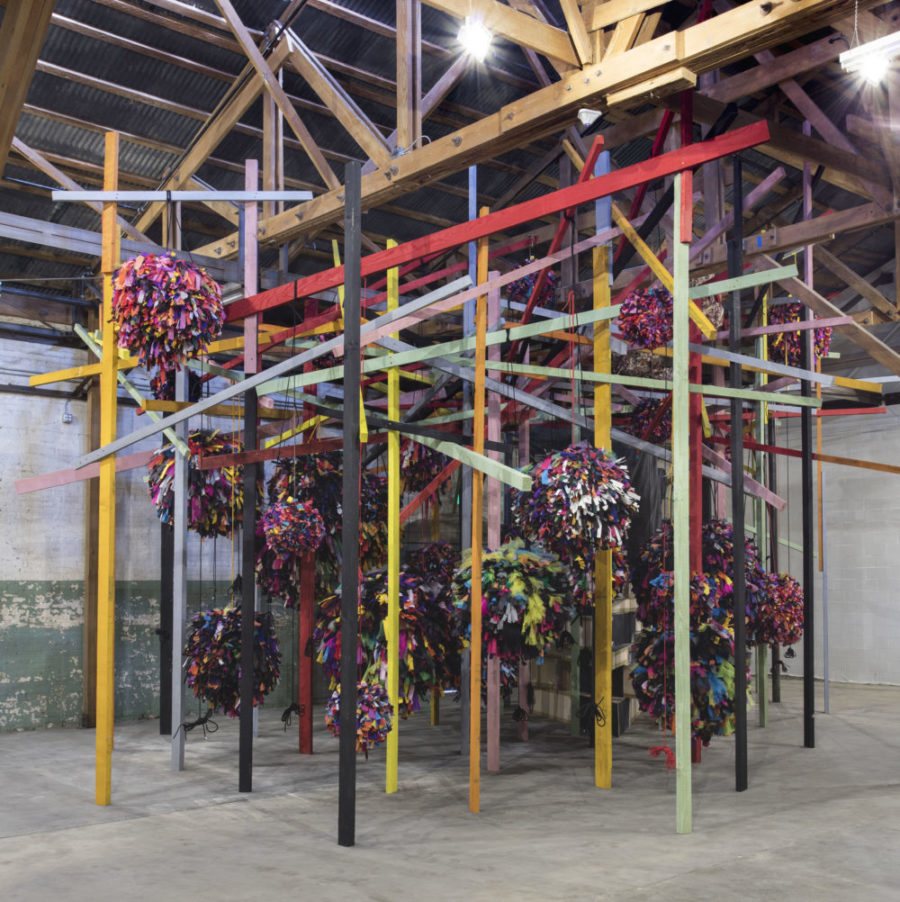 This museum-worthy exhibit, showcasing textile sculpture exclusively made by women, fills the new expansive LA compound of this international gallery. Chronologically organized rooms weave together a fascinating and cohesive exploration in texture, scale, and process that will tempt you to reach out and touch. A perfect instance of this phenomenon: British artist Phyllida Barlow’s fantastically large-scale and colorful installation (pictured)­. An example of the anti-monument tradition, massive felt pompoms hang from a plywood structure held together by everyday materials, including tape.

Curated by performance artist Johanna Went, this survey of late works by punk painter Mark Gash serves up a vibrant vision of LA in the 1980s. Models and muses dawning iconic styles of the decade (mullets and kimonos) are depicted in neon portraits. His impasto technique is reminiscent of William de Kooning’s 1950s Woman paintings without the implication of aggression towards the portrait sitter.

Dance, film, sculpture, and more chime in theme and subject matter while highlighting the diversity of art making communities in the Los Angeles area. Rafa Esparaza’s performance piece on Aug. 13 (location TBD) RED SUMMER, freedom is an endless meeting. and i don’t miss your heat. but here we are again., is a day long act of digging dedicated to 2015, the deadliest year on record due to police killings in the US. Esparaza’s endurance piece chimes with the prolific quality in Arthur Jafa’s work on view, which celebrates the black aesthetic. With a goal reminiscent of Claudia Rankine’s poignant posing of imagery and text in Citizen to illustrate constant occurrences of racism, Jafa fills 200 three-ring binders with montages of icons, historical references, and black individuals in scenes of glory, grief, athleticism, and the everyday. Museumgoers can learn more about artists and pieces involved in this show, during curator talks and film screenings scheduled throughout the span of the exhibition.

London-born artist Paul Lee experiments with weight and the idea of the body in pieces made of household objects (towels) and musical instruments (tambourines). The most successful pieces in this successful are the studies in negative space posed by his towel sculptures (pictured) which feature blocks of cut fabric, frozen in time, depicted toppling downwards.

Cindy Sherman: Imitation of Life  (thru Oct. 2) @ The Broad

Visceral depictions of meat, corpses, and disgraced socialites appear alongside iconic film stills/self-portraits of chameleon Cindy Sherman. This massive chronological retrospective holds examples of all of Sherman’s studies in identity, film, and photography and is an unintentional ode to the selfie generation. Despite the apparent foreshadowing of today’s selfie popularity, Sherman explained in 1999 “I’m under so many layers of makeup that I’m trying to obliterate myself in the images. I’m not revealing anything.” Though in the last room of the exhibit, the photographer more explicitly points to her own experience in recent work depicting aging female muses, such as Greta Garbo.

Whimsical Escapes in the Form of an Adult Coloring Book