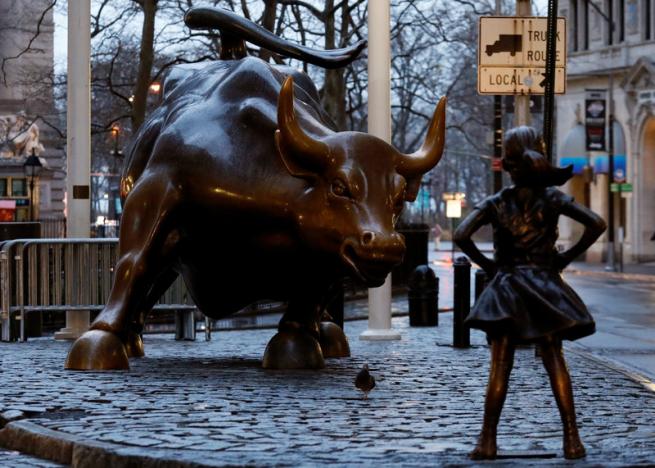 A statue of a girl facing the Wall St. Bull is seen, as part of a campaign by U.S. fund manager State Street to push companies to put women on their boards, in the financial district in New York, U.S., March 7, 2017. REUTERS/Brendan McDermid

A “Fearless Girl” entered our midst yesterday – seemingly out of nowhere, as strong women are wont to do. On the eve of International Women’s Day, a bronze statue of a little girl appeared across from Wall Street’s iconic Charging Bull statue in the Financial District of New York City.

Installed by asset manager State Street Global Advisors (SSGA), the statue by artist Kristen Visbal is meant (according to a statement yesterday) as a call to action to 3,500 companies that represent more than $30 trillion in market capitalization to increase the number of women on corporate boards. A plaque at the girl’s feet says: “Know the power of women in leadership.”

To us at Art Zealous, The Fearless Girl stands for even more. This little girl stands tall in the face of adversity. Fists on her hips, feet planted to the ground, she stares defiantly into the eyes of the charging bull. She also wears a dress and ponytail: a seeming contradiction to her virile stance, but anyone who knows a strong woman knows that she can be feminine and take on the world all at once.

It’s no secret that there is an imbalance of women to men in the art world. As Guerrilla Girls have pointed out, “in 2012, less than 4% of the artists exhibited in the modern art sections of the Metropolitan Museum of Art were women, yet 76% of the nudes were female.” Throughout history, art has been actively used as an agent for social change. To us, this is what The Fearless Girl stands for, whether calling for women in the boardroom, women in museums or equal rights for all.

According to Reuters, a SSGA spokesperson says that the firm is proposing for the girl to stay in her location for a month, but hopes it can become a permanent installation. We hope so, too!

Add to Calendar: Sarah Entwistle at signs and symbols