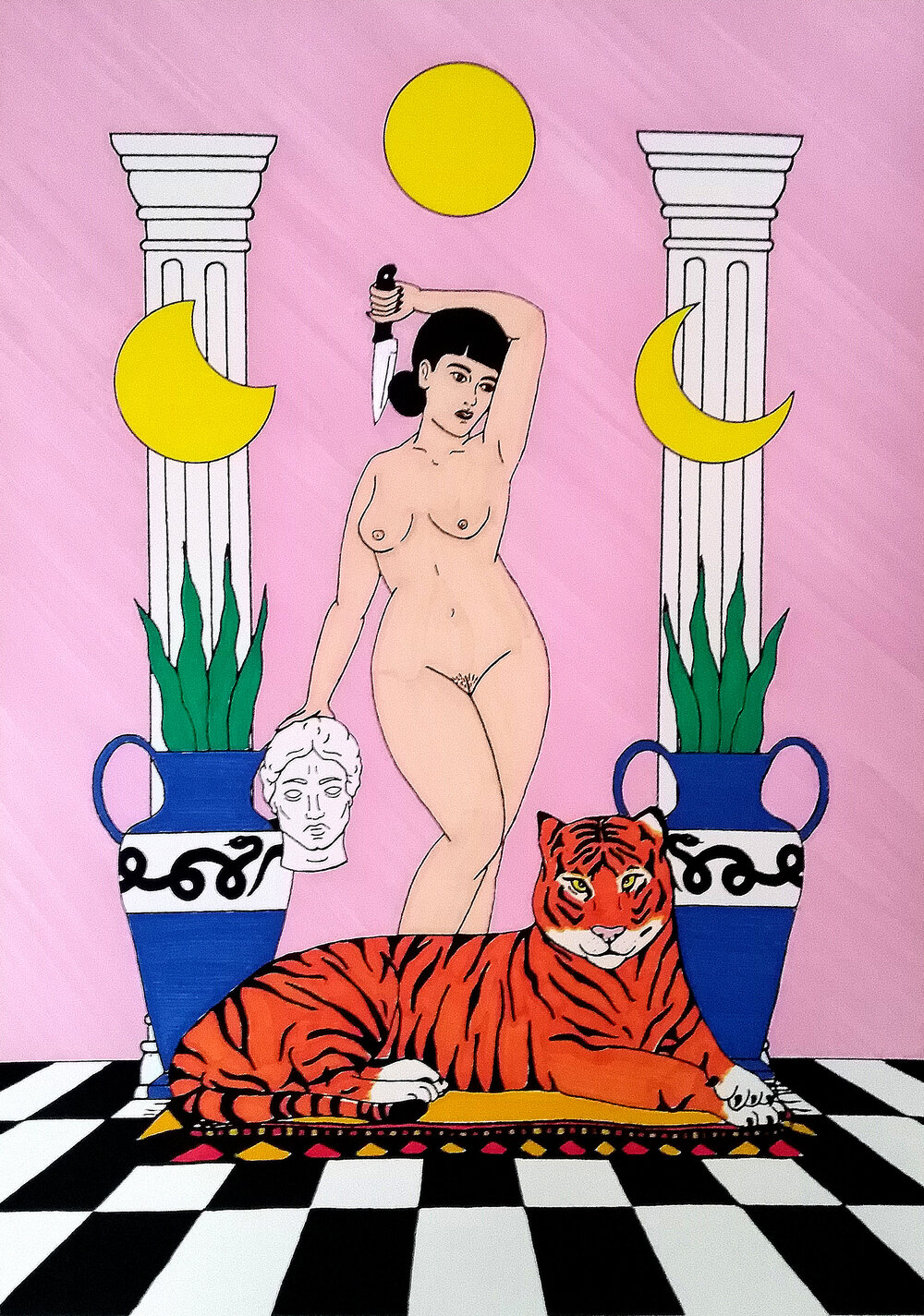 Subverting the Greek tale of Perseus and Medusa, Colombian artist Paola Acebedo asks us to imagine what it would be like for women to be centered in these Classic mythological narratives, and throughout Western Art History in general.

Bogotá-based visual artist Paola Acebedo isn’t shy about showing off the female form. Drawing inspiration from photographs of Grecian urns and pottery, her interest lies not in the process or materiality but the power dynamics represented in these scenes.

By nature, myths have and will always be reductive because they seek to unveil a universal truth; but as there are no universal truths, and Paola seeks to redefine the tight boundaries placed upon the female form and experience since antiquity.

Through the simple act of swapping female characters for their male counterparts, as in the case of Perseus and Medusa, Paola invites viewers to question the role that has been delegated to women throughout art history. We discussed this act of gender role swapping, Greek mythology as it relates to Latin American Heritage, and symbolism with Paola. Read on for the full interview.

Art Zealous: I’m interested in your use of Greek imagery in your graphic art rather than Latin American, South American, Mesoamerican etc.; is this because it is considered in the Western world widely to be archetypal? What role does your Latina heritage play in this choice?

Paola Acebedo: “La cabeza de Perseo (Perseus’ Head)” criticizes some behaviors and believes of our western culture, from which Greek civilization is a founding influence, as well as a pillar of the Latin American culture. Not long ago I bought a beautiful book of Greek vases that made me realize that the male figure is usually represented naked and strong; in comparison, female characters in these vases look weak and always dressed. Many of the images of these series were originally male, which I turned into strong naked women with my drawings.

As a Latin-American, as a woman, I question myself about the origins of my behaviors and beliefs. Even though I am not extremely concerned about my heritage, since we all are a mixture of various influences that changes throughout time, Greek culture is one of the most visible answers. But not the only one: the bright colors and the fauna of South America could be also mentioned.

AZ: Regarding this statement from your artist page on Domingo Comms: “How have we naturalized the invisibility of women, what makes them expendable in myth?” “Perseus’ Head” subverts the tale so that it is Medusa who cuts off the head of Perseus. In your words, how does Medusa taking the same action rev-vindicate women?

PA: Growing up in a culture in which religion and beliefs establish that men play a dominant role, made me ask myself a simple question: what would happened if it was the opposite, and women took this main role in history? By changing roles between Perseus and Medusa I hope that the people who watch my pieces question themselves about the place of women in history. With this simple swap I expect to point out the way women have been mistreated in our patriarchal culture.

AZ: What other symbols or imagery in your work do you use to investigate power dynamics between men and women?

PA: I utilized animals, such the tiger, which appears in one of the pieces of the series. This imagery refers to a tigress named Machli who ruled the territory in which she lived for many years, she gained her power by defeating all the tigers of the region, becoming, for me, a representation of women empowerment. Other elements are columns, which represent strength and firmness; the vases which stand for the feminine figure; and, nature, for instance, the sun and the moon, symbolizing the power of nature and how it is the most important force in the universe.

AZ: Regarding this question from your artist page: “Who are our heroes? Why are so many of them violent towards women?” Who would you say are your heroes? What traits do they possess?

PA: My heroes are the woman and men who fight every day for women rights, working for the abolition of all the unjust treatment and inequality toward everyone in our society; all women who fight against the patriarchy.

Paola Acebedo is one of Domingo Comms’ Featured Artists and is featured on Art Zealous as part of our series highlighting Latin, Latina and Latinx American Artists.

The Aesthetics of Horror with Artist Alexander Glass