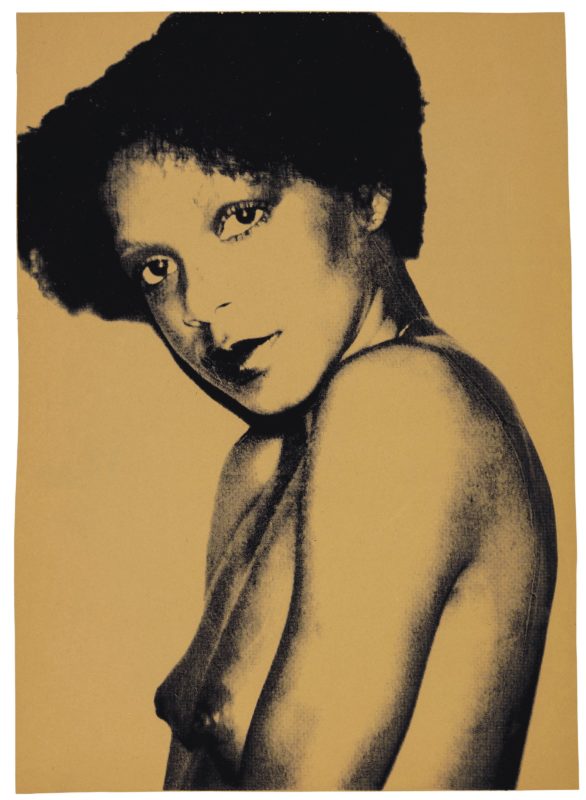 Many young people who are looking to start their art collection or add to it, typically find auction houses intimidating. Visions of paddles and fancy furs in a room filled with millionaires can sometimes an scary thought for new, young buyers. So when Christie’s announced its Prints & Multiples live auction and a complementing online sale Screen Star: Alexander Heinrici, Master Printer, we were quite happy to find out that there were plenty of lots under $2k! The world of prints and printmaking is a topic we wanted to learn more about so we enlisted the help of Lindsay Griffith, Specialist and Head of Sale, Prints & Multiples at Christie’s. She’s breaking down facts, myths, and ways to get involved in an auction at Christie’s.

AZ: Is a print is more than just a copy of an original?

Lindsay Griffith: Although printmaking involves reproducing an image, a print is more than just a copy of an original. Fine art prints are something else entirely, resulting from a close collaboration between the artist and the print studio. Printers — the people who work with the artist to produce an edition — are highly skilled technicians, and are often artists in their own right.

Prints are not made in large production runs intended solely for commercial sale. A limited number (known as an edition) are produced, with prescribed routes for initial sale — either through the artist, a commercial gallery or a publisher. As a result, they are true works of art, and as important to the artist as drawings or other works on paper. A print is any work of art made in multiple iterations, created through a transfer process. There are many different types of prints, and the process is constantly evolving, but the four best-known techniques are etching, lithography, screen print and woodcut.

AZ: So why do artists make prints?

LG: Artists make prints for a variety of reasons. They might be drawn to the collaborative nature of the print studio, or the potential for innovation the medium offers, or for a print’s potential to document each stage of a creative process. Prints can offer a completely different creative outlet to the artist’s primary working method.

Lucian Freud would create etchings only in black and white following his days in the painting studio, while Ellsworth Kelly applied the same fastidious understanding of color and form to his editioned work. Some artists consistently make prints for their entire career — Jasper Johns and Pablo Picasso are famously prolific examples —while others come to printmaking in bursts of activity, such as Barnett Newman. Typically these periods can be aligned to working with a particular print workshop.

AZ: What’s with the fraction?

LG: An ‘original’ print is technically a unique work given it is generally produced as a limited number of impressions (collectively known as an edition), and each print is given an edition number, typically written as a fraction — for example, 24/50. The number to the right of the slash indicates the edition size (in this case, 50), while the figure to the left is the individual print’s number.

An artist may also produce a limited number of artist’s proofs, often marked A/P, that are identical in nature to the standard edition. Here again, fractions may be used to indicate the total number of proofs, and the print number (e.g., A/P 1/4). Other proofs may be made at an earlier stage, as the artist and printer develop an image or test different compositions. These are known as state proofs, trial proofs or color proofs. These can be unique, with differences in color combinations, paper types or size. Andy Warhol started to sell his trial proofs as unique color-combinations separate from the edition, and they’re now some of the most coveted works in his print market.

When the image is perfected, a proof is made and signed B.A.T. (an abbreviation of the French bon à tirer, or ‘ready to print’). The rest of the edition is matched to this image, which is unique and traditionally kept by the printer.

AZ: Is bidding is easy through Christie’s?

LG: Mention of an art auction conjures images of auctioneers, adrenalin-fueled bidding and eleventh-hour drama. And while we think that’s the fun part, it can also feel intimidating to a first-time collector. In reality, bidding has never been easier or more accessible, whether you want to attend a live auction at one of Christie’s auction houses around the world, or simply do it from home online. And buying fine art and objects isn’t the sole purview of millionaires: price points run the gamut, particularly in online sales, where you might pick up an original de Kooning or Warhol for just a few thousand dollars. Prints & Multiples is a great category for emerging collectors – it is a great way to learn about an artist’s process and imagery. Watch this video for a quick tutorial on how to buy at Christie’s.

AZ: Explain the four ways to bid through Christie’s?

LG: 1. In-person: Attend a live auction at one of our salerooms around the world and grab a paddle to make your bid.

2. By telephone: You can also place bids over the telephone during an auction.

3. Online with Christie’s LIVE™: Follow along with live sales from your desktop computer via Christie’s LIVE to bid online while an auction is happening in real-time.

Bonus! Unlike a museum, Christie’s is always happy to take a work out of its frame to enable you to take a closer look at it before purchasing. They’ll even set you up with a print specialist to discuss condition in front of the object itself, and elaborate on the nature of that particular edition.

AZ: Are there works under $2k up for sale in both auctions?

LG: In the live auction, there are 18 works with low estimates under $2K from artists such as Man Ray, Max Ernst, Dan Flavin, Amedeo Modigliani, and Georges Braque – among others. We are especially excited about our concurrent online-only sale, Screen Star: Alexander Heinrici, Master Printer that includes a large number of works from the printers archive at a great price point some as low as $200. It is such a great sale to begin a contemporary collection with works by Donald Baechler, Donald Sultan, George Condo any many others.

AZ: What is the top lot of the sale in Prints & Multiples sale?

AZ: Who was Dr. Giuseppe Rossi?

LG: Dr. Giuseppe Rossi was the chest and vascular surgeon credited with saving Andy Warhol’s life on June 3, 1968, after he was shot by radical feminist and playwright Valerie Solanas.

During a particularly difficult five-and-a-half-hour surgery, Dr. Rossi opened the victim’s chest, massaged his heart to stimulate movement, removed his damaged spleen and the bottom part of his punctured right lung, and authorized a transfusion of no less than 12 units of blood.  Although Dr. Rossi did not know it at the time, the stricken figure on his operating table was none other than Andy Warhol. Medical historians have stated emphatically that Dr. Rossi overturned long odds to save the artist’s life. The incident had a profound effect on Warhol and this group of ten Campbell’s Soup II screen prints, 1969, included in the live auction and sold as individual lots, was given to the doctor as a gesture of the artist’s immense gratitude. For more information and an interview with Dr. Rossi’s widow, click here.

AZ: Alexander Heinrici  is a “master printer.” Could you explain?

LG: Christie’s cataloging also indicates where a work was published — namely the studio where a print was made. These workshops can be huge production studios with large-scale equipment or small-scale operations with only a few employees. This season, we are extremely fortunate to be working with Alexander Heinrici for this stand-alone online sale. Defined as a “master printer,” Heinrici’s prints have been featured in numerous gallery and museum shows, with works on display and in the collection of New York’s Museum of Modern Art and the Whitney Museum.

AZ: Did Heinrici and Andy Warhol work together?

LG: When Warhol began to experiment with screen printing in the 1960s, the practice was not widely used. In fact, for most of the 20th century, screen printing techniques had been considered trade secrets, and were kept confidential. It was a lengthy process that required endless patience and a keen eye for detail. Neither was it unanimously understood as an art form: the reliance on a machine made skeptics of many whose views of art required direct contact between artist and medium.

When the two began to work together, Heinrici says, Warhol was stunned by the precision of the prints Heinrici was creating: ‘He said, “Once in a while you have to make mistakes so it looks like a Warhol!” Heinrici produced the ‘Ladies and Gentlemen’ and ‘Jagger’ series for Warhol, and would go on to create silkscreen portraits for the artist for the next decade. In that time, Heinrici’s client list would grow to include Willem de Kooning, Robert Rauschenberg, Roy Lichtenstein and Robert Indiana, among many other luminaries of 20th-century American art.

all photos courtesy of Christie’s

Where to Stay, Eat and Play in Hong Kong for Art Basel

The Aesthetics of Horror with Artist Alexander Glass